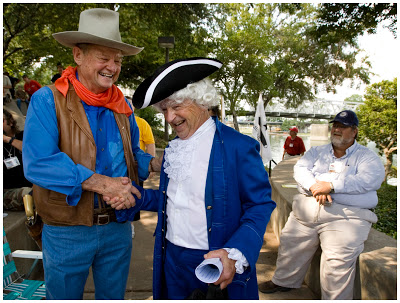 This is a Greco-Roman nation, gathered in a Hodenosaunee longhouse.

As they wrap themselves in the Constitution they mean to shred, that is the self-evident Truth the Tea/GOP Party ultimately cannot face.

Our legal godfathers — the ones Glenn Beck loves to conjure — were deistic liberal humanists whose core beliefs he hates.

They dumped that tea because they despised the corporation that owned it and the idea of empire it (and today’s corporate-military right) stood for.

The very first phrase of this nation’s defining document, the Bill of Rights, says:

“Judaeo-Christian? Not a chance.”

The grassroots farmers that made the Revolution were free-thinking hemp growers. Their favorite scribe, Tom Paine, was the son of a Quaker whose Age of Reason assaulted the church with unsurpassed fury. Today’s Tea/GOP would have it burned.

Our greatest genius, Ben Franklin, was a proud and joyous sexual adventurer. His very presence today would induce howls of (envious) outrage from the religious right.

It was Franklin who most loved Native America. He introduced himself to the French as “an American savage.” He stamped the Hodenosaunee (Iroquois) gifts of personal freedom and a democratic confederation into the soul of the new nation.

More formally, our tradition of direct voting, still alive in many New England towns, where the Revolution was born, was conceived in Athens, 508 BC. The Republic (“if you can keep it,” as Franklin warned) came from Rome, 509 BC.

The federal structure adopted in Philadelphia in the summer of 1787, was — with Franklin’s mentoring — based on the Iroquois Confederacy. That union was born at latest 1540 AD. It sustained a functioning democracy for at least 250 years, still longer than the U.S. has been in existence.

The matriarchal Hodenosaunee were defined by a love of nature and communal land stewardship. Open dialog was as easily accepted as abortion and homosexuality. Along with so many other lethal diseases, Original Sin was an unwanted import.

It is the humanistic liberalism of America’s Founders that STILL enrages today’s neo-Puritan Tea/GOP. The Jefferson they love to claim fathered at least five children with his slave Sally Hemings, 30 years his junior. Some were conceived while he lived “alone” in the White House.

He and Franklin and Madison and Paine had no time for the Christian faith. It’s by their intelligent design that Jesus appears nowhere in the Constitution. Their liberal Deism said a Creator got the universe going, installed the laws of nature, endowed humans with free will (and inalienable rights), then left.

Franklin’s disdain for church services spices his autobiography. Jefferson clipped all references to a divinity for Jesus out of his personal Bible. Paine’s Age of Reason still enrages the official church. Madison’s First Amendment enshrines disdain for an official religion. Unitarianism in all its liberal diversity was shared by presidents two through six, including two Adamses, Jefferson, Madison, and Monroe.

Their system of checks and balances was based on the Socratic proposition that with the freedom to dialog, human reason will prevail. Thus the First Amendment’s very first phrase exalts freedom from Religion, ie separation of church and state, a phrase coined by Jefferson, demanded by the new nation as a whole.

Like virtually all other American farmers, Washington and Jefferson raised serious quantities of hemp, and made good money from it. Franklin owned a paper mill that ran on it. All may well have smoked its psycho-active cousin, now known as marijuana. If you told them the nation they founded would make this versatile herb illegal, they would laugh at you.

They’d be equally horrified to hear the Foxist Tea/GOP claiming them as icons in a sectarian crusade for repression and empire.

Today’s religious right is an unholy fusion of theocratic authoritarianism — which our Founders hated above all — and corporate tyranny, whose tea they pitched in Boston harbor.

Along with George III, there’s nothing they loathed more than the anti-human hypocrisy we hear from the Foxist Legion.

Likewise, Beck, Pailn, Limbaugh, O’Reilly, and their ilk would have shrieked with rage at the actual Franklin and Paine, Jefferson and Madison, not to mention the populist farmers and sailors, workers and women who fought and died for the Revolution we all Revere (yes, him too!).

So next time those Tea/GOP phonies gaze off in the distance to claim kinship with the Founders, remind everyone you know who really did win that Revolution and write that Bill of Rights.

Those hemp-growing, tree-hugging, corporate-hating deistic free loving and free thinking present-at-the-creation Americans believed above all that the Truth would keep us free.

Now more than ever, it’s our patriotic duty to prove them right.