Massive Profits : The Moving Force Behind our Health Care System 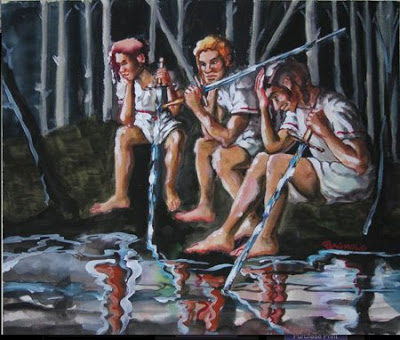 If one believes that the Marquis de Sade espoused sexual abstinence one can believe that the CEOs of AHIP desire decent health care.

Truth appears on the internet long before the mainstream media becomes cognizant of many realities. I am reminded of these words from preeminent New York Journalist John Swinton, spoken in a toast before a press banquet in 1880:

“If I allowed my honest opinions to appear in one issue of my paper, before twenty-four hours my occupation would be gone. The business of journalists is to destroy the truth; to pervert; to villify; to fawn at the feet of mammon, and to sell this country and this race for their daily bread. We are the tools and vessels of rich men behind the scenes. We are the jumping jacks, they pull the strings and we dance. Our talents, our possibilities and our lives are all the property of other men. We are intellectual prostitutes.”

This statement occurred to me after further looking into Sen. Teddy Kennedy’s dance with the devil in very secret meetings he had been having with a group of lobbyists regarding “universal health care.” I briefly alluded to this in my last essay on The Rag Blog. These meetings have now been discussed in detail by Helen Redmond in an article in Counterpunch. The author points out that Senator Kennedy has been in consultation with lobbyists from Aetna, Americas Health Insurance Plans (AHIP), the Business Roundtable, the United States Chamber of Commerce, PhRMA, the American Cancer Society, Easter Seals, AARP , the AMA and the AFL-CIO.

Nowhere at the table are representatives of the numerous grass roots proponents of universal single payer health care, i.e., the Physicians For A National Health Program (PNHP), the California Nurses Association, Health Care Now, or the numerous unions, civic and religious organizations, or the individual citizens who by the millions endorse Rep. John Conyers HR 676.

Perhaps, in time, the mainstream media will give us some insight into what is transpiring here. When this does come to pass we must look at the reporting with a jaundiced eye recalling then Vice President Cheney’s meetings with the oil cartels in 2001. The public still is not aware of what happened, or what was agreed to at these seances. In any event we must recall that the reason for any insurance company is to reward its executives and pay dividends to its stockholders. Again, remember the massive profits made by the executives of the HMO industry. To think that these folks will agree to any decent system of health care is naive. If one believes that the Marquis de Sade espoused sexual abstinence one can believe that the CEOs of AHIP desire decent health care.

I noted on TV an advertisement for an organization, Cynergy Health Plans, which would provide “health insurance” for only $5 a week. To me that was incomprehensible; hence, I clicked on their web site and found myself facing QuoteFinder.org, the web sight of United Health Care. There I discovered that “UnitedHealthOne is based in Indianapolis, Indiana, and has sold family health insurance for over 60 years. Golden Rule, PacifiCare, American Medical Security, MAMSI, Oxford Health Plans, and UnitedHealthOne, are only some of the many companies under United Healthcare.

UnitedHealthOne offers a variety of policies including the Copay Select, the HSA 100 (Health savings Account), the HSA 70, the CoPay Saver, the affordable Saver 80 and Plan 80, and the traditional _Plan 100. The medical deductibles can range from $500 to $10,000 and office visit co-pays from $25-$35. Prescription coverage ranges from a copay of $15.00 for generic drugs to a copay of $35 for brand name prescriptions.” Guess where Synergy fits in! I did not obtain any specific quotes as the site required one to contact a sales representative.

The article states: “Thanks to the New York Attorney General we know now that insurance companies were in fact swindling members who sought out-of-network care. Several insurance companies including United Health Care, CIGNA and Aetna, have agreed to pay millions of dollars to settle an investigation into how they set rates for out-of-network care. It turns out that the provider [we used to call these folks physicians — SK] rates the insurance companies were claiming to be usual and customary were much lower than what the providers were actually charging, leaving patients to pay a much higher portion of the bill.”

Another gimmick used by the insurance companies is, once a claim is filed, to refuse the claim on the basis that the condition was a “pre-existing.” According to Jeffery Dach, M.D., writing on the Bio-Identical Hormone Blog, the companies streamline and expedite denial of claims, the industry buys and uses “denial engine” software. This is a computer software which can be adjusted to increase or decrease medical claims and denial rates depending on how much profit they want to keep. In the same article the author notes “United HeathCare was forced to overhaul its claims handling practices under a settlement announced Thursday, Sept. 6, 2007, with 37 state insurance departments. Total penalties could rise to as much as $20 million if additional states join the agreement.” Involved were a number of complaints about benefits, utilization review procedure, errors concerning deductibles, etc.

U.S.A. Today, in an article by Julie Appleby in 1999, reported that Humana Health Plans was facing a class action lawsuit in a Miami district court, that was brought under federal racketeering law, claiming that the company committed a fraudulent act when it failed to disclose incentives given to claims reviewers and doctors to limit medical coverage. The same author in the year 2000 reported Humana Health Care Plans paying $14.5 million to settle a federal lawsuit accusing the HMO of overcharging government health programs and state Medicaid programs.

The New York Times on October 11, 1998, reported that the Columbia/HCA Healthcare Corporation of Quorum Health Group was cited for defrauding Medicare through bogus expense claims. Analysts at that time estimated that the claim might top $1 billion.

In my last submission I referred to the fact that mandating the purchase of health insurance might indeed be unconstitutional. This is addressed at length by Karl Manheim and Jamie Court in an article in the Christian Science Monitor.

In brief the authors ask, “Are health insurance mandates constitutional? They are certainly unprecedented. The federal government does not ordinarily require Americans to purchase particular goods or services from private parties. The closest we come is when government imposes a condition on the grant of discretionary benefit or permit. For instance, in most states, you must have auto insurance to drive a car, or you are required to install fire sprinklers when building a new house. But in such cases, the ‘mandate’ is discretionary — you do not have to drive or build a house. Nor do you have a constitutional right to do so.” (Karl Manheim is a professor at Loyola Law School in L.A. Jamie Court is chairman of Consumer Watchdog in Santa Monica, Calif.)

I had intended to address the matter of cost savings re: physicians fees and malpractice insurance when the presidential commission regarding health care gets down to business; however, we will save that for a subsequent submission. I will merely note here, before closing, that there has been a repetitive TV ad for a prescription medication for a skin condition known as Rosacea. The medication advertised is sold as ORACEA, Prices vary from place to place for this; however, the cost is approximately $150 for 30 40- mg. tablets. This is actually an antibiotic which has been around for years, i.e. doxycycline. In the generic form it is available for approximately $60 for 100 100-mg. capsules. The naive observer would, from the advertising, feel that this is another expensive “research” product of a pharmaceutical company. Oh, how we are deceived!

4 Responses to Massive Profits : The Moving Force Behind our Health Care System