Marxist Scholar Davis, author of ‘City of Quartz,’ will speak on ‘Texas vs. California: Godzilla vs. The Smog Monster’ at 5604 Manor in Austin. 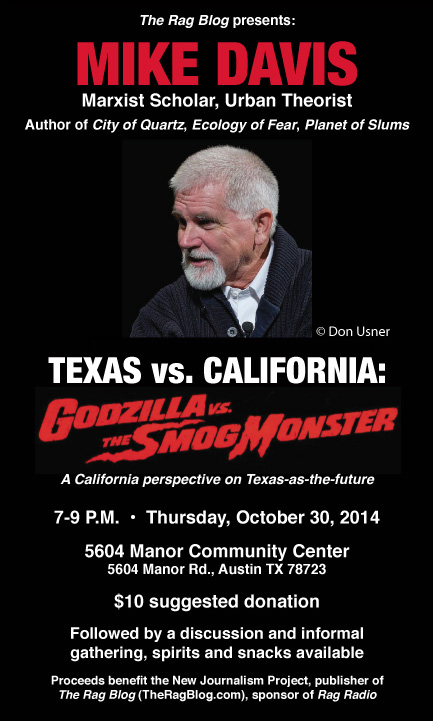 “If it’s apocalypse you want — and frankly who doesn’t, because how else to explain the mess we’re in — nobody does it better [than Mike Davis].” — The Guardian

“Davis remains our penman of lost souls and lost scenarios: He culls nuggets of avarice and depredation the way miners chisel coal.” — The Nation

A discussion and informal gathering will follow — with food, beer, and wine available. The event benefits the New Journalism Project, the Texas nonprofit that publishes The Rag Blog and sponsors Rag Radio. Suggested donation is $10.

“Davis’ work is the cruel and perpetual folly of the ruling elites.” — The New York Times

“City of Quartz turns more than a century of mindless Los Angeles boosterism rudely, powerfully and entertainingly on its head. It is a bracing, often strident reality check…” — LA Times

“Few books shed as much light on their subjects as this opinionated and original excavation of Los Angeles from the mythical debris of its past and future.”– San Francisco Examiner on City of Quartz

“A profound enquiry into an urgent subject … a brilliant book.” — Arundhati Roy on Planet of Slums