It appears that the issue of marriage equality is less a matter of partisanship than it is of pandering to the religious right. 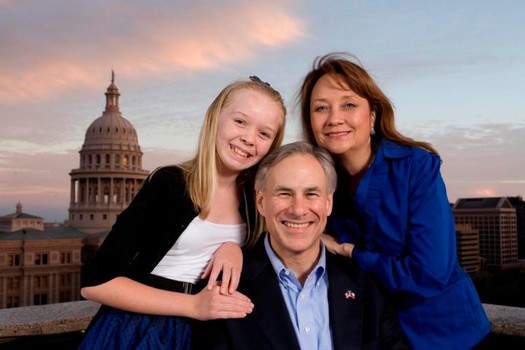 Abbott with family: The Ozzie and Harriet option? Image from OutSmart.

Most lawyers are embarrassed to make worthless, senseless arguments to support their positions. But not so, apparently, Texas Attorney General Greg Abbott, the heir apparent to the Texas Governor’s mansion, if recent polls are correct.

Time after time, Abbott has argued that marriage equality, barred officially by the Texas Constitution, is not protected by the U.S. Constitution. But this position has one great hurdle to overcome: the U.S. Supreme Court, in a 1967 case, found that prohibitions of interracial marriage were unconstitutional. In Loving v. Virginia, the court unanimously held that “Marriage is one of the ‘basic civil rights of man,’ fundamental to our very existence and survival….”

Mildred Loving, one of the named plaintiffs in that 1967 case, made the following statement on the 40th anniversary of that decision:

Several court opinions about marriage equality for gays have cited the Loving opinion and the statement by Mrs. Loving. There have now been over 23 such opinions in federal district courts, 14 in state courts, and four in federal courts of appeal. The opinions in these cases have been written by judges appointed by both Republican and Democratic presidents and governors, and by some elected as candidates of one or the other political party.

Over half the population lives in a state where gays may now marry.

Decisions by the Republican-dominated U.S. Supreme Court, which have allowed many of these opinions to go into effect, have resulted in marriage equality in 32 states and the District of Columbia. Over half the population lives in a state where gays may now marry.

It appears that the issue of marriage equality is less a matter of partisanship than it is of pandering — pandering to the religious right for the most part. And Attorney General Abbott is one of the leading panderers as he continues to make four tired and losing arguments to uphold the Texas Constitution [my thanks to attorney James J. (Jody) Scheske, who has litigated many gay rights cases, for parsing the basic elements of Abbott’s arguments]:

1. “The state has a vital interest in encouraging procreation, something only heterosexual couples can accomplish.” Even a three-year old child who has been adopted by gay parents or one who has two mothers can see through this absurd rationale. Those of us who are older should recognize the patent absurdity in arguing that the state has a legitimate interest in whether we have children. It is none of the state’s business whether married couples have children. And what about those of us past our child-bearing years who decide to marry? Should marriage be forbidden by the state on the grounds that we can’t procreate? What about sterile couples and those who don’t want to have children?

But even if Abbott’s non-logic convinces you that this argument is a good one, forbidding same-sex marriage cannot encourage procreation in heterosexual couples.

2. Abbott contends that Texas has a legitimate interest in fostering a preferred family structure of heterosexual parents, married, and living together. This will, of course, make about half of all once-married couples scratch their heads as they remember that they have been divorced — at least one time. Probably not more than 50% of all Texas children live in the nostalgic Ozzie and Harriet nuclear family. The other half live in single-parent households, in blended families, with grandparents and other relatives, and with same-sex couples.

If there is legitimate state interest in the so-called nuclear family structure, Texas has failed miserably in bringing about that circumstance. Once again, I suggest that it is not the state’s business to decide our family structure, especially since the state allows same-sex couples to serve as foster parents and to adopt children. How does Abbott explain these allegedly competing state interests? He doesn’t, mainly because they can’t be reconciled.

3. Then, there is the tradition argument: “We (the states) should be allowed to continue to do what we have always done because we have always done it this way.” Doing something for a long time, especially when dealing with a “basic civil right,” has never been a winning argument.

4. Finally, “if the state allows same-sex marriage, it would have to allow same-sex divorce, and what a horrible mess that would be.” This is another absurd argument for the simple reason that we already have gay married couples living and working in Texas, and some of them need divorces. In divorce proceedings, the courts adjudicate both real and personal property rights and the rights of children. These issues need to be adjudicated when a marriage becomes insupportable for whatever reason.

Gay couples are no less susceptible to marriage dissolution than are heterosexual couples. To deny them a legal remedy to resolve marriage dissolution issues is to deny them equal access to the courts — a position as untenable as denying two consenting adults the right to marry whomever they wish. Once a couple takes up residence in Texas, they cannot return to the state where they were married to get a divorce because all states have residency requirements for divorce, but seldom for marriage.

Denying same-sex couples access to divorce proceedings does nothing to promote procreation among heterosexual couples.

Denying same-sex couples access to divorce proceedings does nothing to promote procreation among heterosexual couples any more than does denying them marriage.

But these are the best arguments that Greg Abbott has been able to offer the courts in support of the gay marriage ban approved in 2005 in an election that only 18% of registered voters chose to vote in. Perhaps, if he becomes governor, he will find better arguments to support his agenda — whatever it may be — as the top elected official in Texas.

There is no good legal or constitutional reason why Abbott cannot say to the courts that he can make no cogent constitutional arguments in support of the Texas ban on same-sex marriage and that he will leave it to the courts, in the exercise of their judicial wisdom, to decide the constitutional merits of the petitioners’ claims. In Texas, the Attorney General employs a Solicitor General, who handles all litigation before the U.S. and Texas Supreme Courts and is the top legal advisor to the Attorney General.

An attorney who served a similar role to the Texas Solicitor General, the U.S. Solicitor General under President Reagan, Rex Lee, once explained that the Justice Department will not defend laws “where the Attorney General believes, not only personally as a matter of conscience, but also in his official capacity as the Chief Legal officer of the United States, that a law is so patently unconstitutional that it cannot be defended.”

Attorney General Abbott would demonstrate both character and good judgment, while saving the taxpayers hundreds of thousands of dollars, if he took a similar view. But Abbott has seldom taken such a non-political approach to his job and has never tried to save taxpayer money. Instead, he has repeatedly, completely on his own volition, and in order to score political points with right-wing zealots, sued the federal government, mostly for specious reasons.

Abbott’s opposition to same-sex marriage is likewise specious. It is somewhat like the efforts of Williamson County District Attorney John Bradley, who denied Michael Morton access to DNA tests for over six years, tests that showed Morton innocent of the crime for which he spent almost 25 years in jail, claiming that he (Bradley) was just doing his duty. What he was doing was denying justice to Michael Morton, just as Abbott is denying justice to same-sex couples in Texas, albeit temporarily.