Stephen Tompkinson leads a solid cast in this well-written skein. 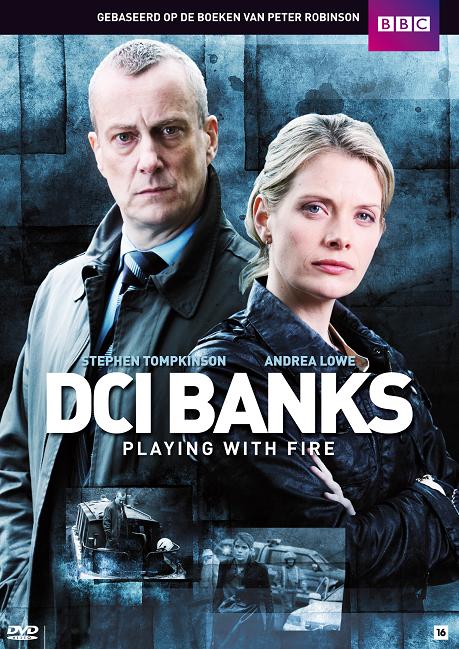 To date, 20 episodes (10 two-parters) have been shot. Two of the four seasons are on Netflix and several episodes recently aired on 166 PBS stations and can probably still be seen at their website for free. PBS aired the two-parters as 90-minute single episodes.

In that first episode, an officer is killed while responding to a domestic disturbance call, and his partner subdues the killer, who ends up in a coma. When DCI Banks investigates the grisly scene, he discovers it’s the home of a murderer and serial rapist — with four victims of open cases buried in the cellar. Banks is haunted by the desire to find the fifth — who may still be alive.

DS Annie Cabbot is investigating for Professional Standards the apparently extreme assault on the killer/rapist, who has died from his injuries. Banks suspects the killer’s wife Lucy is complicit in the murders, while Cabbot seeks to prove that the second officer used excessive force. After Lucy’s true identity is revealed, that complicates the case, but does not deter Banks from his goal.

The series is based on the novels of Canadian writer Peter Robinson. The TV series had five writers, with 12 episodes penned by Robert Murphy, who won “Best International Series” for Cape Wrath, created the excellent Murder City series and wrote an episode of the great Scottish series Rebus.

Stephen Tompkinson was award-nominated for the two fun series Ballykissangel and Wild at Heart, was voted 1994’s “Best TV Comedy Actor” for Drop the Dead Donkey and appeared in some of my favorite Brit TV shows: Father Ted, Chancer, The Vicar of Dibley, New Tricks, Dalziel and Pascoe, Prime Suspect, and Agatha Christie’s Marple.

Caroline Catz (DI Helen Morton) is beloved and best-known as female lead Louisa in Doc Martin, but she also had an important role in The Vice.

DCI Banks has also aired in Estonia, Norway, Canada, Denmark, Germany, Finland and Australia. My latest (greatest) wife and I found it to be good, dramatic, intelligent TV fare.