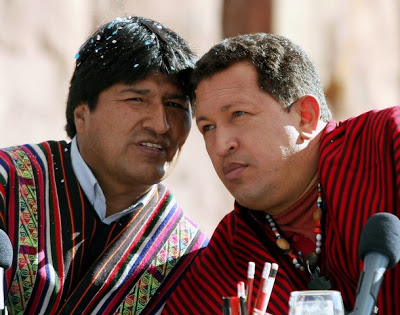 Presidents Evo Morales of Bolivia and Hugo Chavez of Venezuela. Photo by Alizar Raldes / AFP / Getty Images.
‘The initiatives taken in Venezuela have had a significant impact throughout the subcontinent, what has now come to be called “the pink tide.”‘
By Noam Chomsky / September 30, 2008

CARACAS — During the past decade, Latin America has become the most exciting region of the world. The dynamic has very largely flowed from right where you are meeting, in Caracas, with the election of a leftist president dedicated to using Venezuela’s rich resources for the benefit of the population rather than for wealth and privilege at home and abroad, and to promote the regional integration that is so desperately needed as a prerequisite for independence, for democracy, and for meaningful development. The initiatives taken in Venezuela have had a significant impact throughout the subcontinent, what has now come to be called “the pink tide.” The impact is revealed within the individual countries, most recently Paraguay, and in the regional institutions that are in the process of formation. Among these are the Banco del Sur, an initiative that was endorsed here in Caracas a year ago by Nobel laureate in economics Joseph Stiglitz; and the ALBA, the Bolivarian Alternative for Latin America and the Caribbean, which might prove to be a true dawn if its initial promise can be realized.

The ALBA is often described as an alternative to the US-sponsored “Free Trade Area of the Americas,” though the terms are misleading. It should be understood to be an independent development, not an alternative. And, furthermore, the so-called “free trade agreements” have only a limited relation to free trade, or even to trade in any serious sense of that term; and they are certainly not agreements, at least if people are part of their countries. A more accurate term would be “investor-rights arrangements,” designed by multinational corporations and banks and the powerful states that cater to their interests, established mostly in secret, without public participation or awareness. That is why the US executive regularly calls for “fast-track authority” for these agreements – essentially, Kremlin-style authority.

Another regional organization that is beginning to take shape is UNASUR, the Union of South American Nations. This continental bloc, modeled on the European Union, aims to establish a South American parliament in Cochabamba, a fitting site for the UNASUR parliament. Cochabamba was not well known internationally before the water wars of 2000. But in that year events in Cochabamba became an inspiration for people throughout the world who are concerned with freedom and justice, as a result of the courageous and successful struggle against privatization of water, which awakened international solidarity and was a fine and encouraging demonstration of what can be achieved by committed activism.

The aftermath has been even more remarkable. Inspired in part by developments in Venezuela, Bolivia has forged an impressive path to true democratization in the hemisphere, with large-scale popular initiatives and meaningful participation of the organized majority of the population in establishing a government and shaping its programs on issues of great importance and popular concern, an ideal that is rarely approached elsewhere, surely not in the Colossus of the North, despite much inflated rhetoric by doctrinal managers.

Much the same had been true 15 years earlier in Haiti, the only country in the hemisphere that surpasses Bolivia in poverty – and like Bolivia, was the source of much of the wealth of Europe, later the United States. In 1990, Haiti’s first free election took place. It was taken for granted in the West that the US candidate, a former World Bank official who monopolized resources, would easily win. No one was paying attention to the extensive grass-roots organizing in the slums and hills, which swept into power the populist priest Jean-Bertrand Aristide. Washington turned at once to undermining the feared and hated democratic government. It took only a few months for a US-backed military coup to reverse this stunning victory for democracy, and to place in power a regime that terrorized the population with the direct support of the US government, first under president Bush I, then Clinton. Washington finally permitted the elected president to return, but only on the condition that he adhere to harsh neoliberal rules that were guaranteed to crush what remained of the economy, as they did. And in 2004, the traditional torturers of Haiti, France and the US, joined to remove the elected president from office once again, launching a new regime of terror, though the people remain unvanquished, and the popular struggle continues despite extreme adversity.

All of this is familiar in Latin America, not least in Bolivia, the scene of today’s most intense and dangerous confrontation between popular democracy and traditional US-backed elites. Archaeologists are now discovering that before the European conquest, Bolivia had a wealthy, sophisticated and complex society – to quote their words, “one of the largest, strangest, and most ecologically rich artificial environments on the face of the planet, with causeways and canals, spacious and formal towns and considerable wealth,” creating a landscape that was “one of humankind’s greatest works of art, a masterpiece.” And of course Bolivia’s vast mineral wealth enriched Spain and indirectly northern Europe, contributing massively to its economic and cultural development, including the industrial and scientific revolutions. Then followed a bitter history of imperial savagery with the crucial connivance of rapacious domestic elites, factors that are very much alive today.

Sixty years ago, US planners regarded Bolivia and Guatemala as the greatest threats to its domination of the hemisphere. In both cases, Washington succeeded in overthrowing the popular governments, but in different ways. In Guatemala, Washington resorted to the standard technique of violence, installing one of the world’s most brutal and vicious regimes, which extended its criminality to virtual genocide in the highlands during Reagan’s murderous terrorist wars of the 1980s – and we might bear in mind that these horrendous atrocities were carried out under the guise of a “war on terror,” a war that was re-declared by George Bush in September 2001, not declared, a revealing distinction when we recall the implementation of Reagan’s “war on terror” and its grim human consequences.

In Guatemala, the Eisenhower administration overcame the threat of democracy and independent development by violence. In Bolivia, it achieved much the same results by exploiting Bolivia’s economic dependence on the US, particularly for processing Bolivia’s tin exports. Latin America scholar Stephen Zunes points out that “At a critical point in the nation’s effort to become more self-sufficient [in the early 1950s], the U.S. government forced Bolivia to use its scarce capital not for its own development, but to compensate the former mine owners and repay its foreign debts.”

The economic policies forced on Bolivia in those years were a precursor of the structural adjustment programs imposed on the continent thirty years later, under the terms of the neoliberal “Washington consensus,” which has generally had disastrous effects wherever its strictures have been observed. By now, the victims of neoliberal market fundamentalism are coming to include the rich countries, where the curse of financial liberalization is bringing about the worst financial crisis since the Great Depression of the 1930s and leading to massive state intervention in a desperate effort to rescue collapsing financial institutions.

We should note that this is a regular feature of contemporary state capitalism, though the scale today is unprecedented. A study by two well-known international economists 15 years ago found that at least twenty companies in the top Fortune 100 would not have survived if they had not been saved by their respective governments, and that many of the rest gained substantially by demanding that governments “socialise their losses.” Such government intervention “has been the rule rather than the exception over the past two centuries,” they conclude from a detailed analysis. [Ruigrok and von Tulder]

We might also take note of the striking similarity between the structural adjustment programs imposed on the weak by the International Monetary Fund, and the huge financial bailout that is on the front pages today in the North. The US executive-director of the IMF, adopt ing an image from the Mafia, described the institution as “the credit community’s enforcer.” Under the rules of the Western-run international economy, investors make loans to third world tyrannies, and since the loans carry considerable risk, make enormous profits. Suppose the borrower defaults. In a capitalist economy, the lenders would incur the loss. But really existing capitalism functions quite differently. If the borrowers cannot pay the debts, then the IMF steps in to guarantee that lenders and investors are protected. The debt is transferred to the poor population of the debtor country, who never borrowed the money in the first place and gained little if anything from it. That is called “structural adjustment.” And taxpayers in the rich country, who also gained nothing from the loans, sustain the IMF through their taxes. These doctrines do not derive from economic theory; they merely reflect the distribution of decision-making power.

The designers of the international economy sternly demand that the poor accept market discipline, but they ensure that they themselves are protected from its ravages, a useful arrangement that goes back to the origins of modern industrial capitalism, and played a large role in dividing the world into rich and poor societies, the first and third worlds.

This wonderful anti-market system designed by self-proclaimed market enthusiasts is now being implemented in the United States, to deal with the very ominous crisis of financial markets. In general, markets have well-known inefficiencies. One is that transactions do not take into account the effect on others who are not party to the transaction. These so-called “externalities” can be huge. That is particularly so in the case of financial institutions. Their task is to take risks, and if well-managed, to ensure that potential losses to themselves will be covered. To themselves. Under capitalist rules, it is not their business to consider the cost to others if their practices lead to financial crisis, as they regularly do. In economists’ terms, risk is underpriced, because systemic risk is not priced into decisions. That leads to repeated crisis, naturally. At that point, we turn to the IMF solution. The costs are transferred to the public, which had nothing to do with the risky choices but is now compelled to pay the costs – in the US, perhaps mounting to about $1 trillion right now. And of course the public has no voice in determining these outcomes, any more than poor peasants have a voice in being subjected to cruel structural adjustment programs.

Read all of this article here. / ZNet