Obama’s Bailout Bunch : Sure Seems Like More of the Same 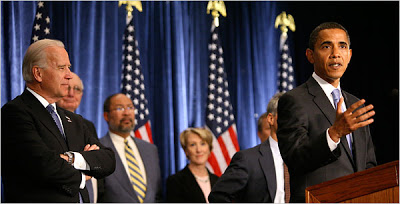 President-elect Barack Obama with Vice President-elect Biden and a group of economic advisers at a news conference in Chicago on Nov. 7, 2008. Photo by Damon winter / NYT.
‘Almost half the people on Obama’s economic advisory board have held fiduciary positions at companies that either fried their financial statements, helped send the world into an economic tailspin, or both.’
By Jonathan Weil / November 11, 2008

It’s hard to believe Barack Obama would even think of calling this change.

Take a good look at some of the 17 people our nation’s president-elect chose last week for his Transition Economic Advisory Board. And then try saying with a straight face that these are the leaders who should be advising him on how to navigate through the worst financial crisis in modern history.

First, there’s former Treasury Secretary Robert Rubin. Not only was he chairman of Citigroup Inc.’s executive committee when the bank pushed bogus analyst research, helped Enron Corp. cook its books, and got caught baking its own. He was a director from 2000 to 2006 at Ford Motor Co., which also committed accounting fouls and now is begging Uncle Sam for Citigroup- style bailout cash.

Two other Citigroup directors received spots on the Obama board: Xerox Corp. Chief Executive Officer Anne Mulcahy and Time Warner Inc. Chairman Richard Parsons. Xerox and Time Warner got pinched years ago by the Securities and Exchange Commission for accounting frauds that occurred while Mulcahy and Parsons held lesser executive posts at their respective companies.

Mulcahy and Parsons also once were directors at Fannie Mae when that company was breaking accounting rules. So was another member of Obama’s new economic board, former Commerce Secretary William Daley. He’s now a member of the executive committee at JPMorgan Chase & Co., which, like Citigroup, is among the nine large banks that just got $125 billion of Treasury’s bailout budget.

Obama’s economic crew might as well be called the Bailout Bunch. Another slot went to former White House economic adviser Laura Tyson. She’s been a director for about a decade at Morgan Stanley, which in 2004 got slapped for accounting violations by the SEC and a month ago got $10 billion from Treasury.

That’s not all. There’s Penny Pritzker, the Obama campaign’s national finance chairwoman. She was on the board of the holding company for subprime lender Superior Bank FSB. The Chicago-area thrift, in which her family held a 50 percent stake, was seized by the Federal Deposit Insurance Corp. in 2001. The thrift’s owners agreed to pay the government $460 million over 15 years to help cover the FDIC’s losses.

Even some of the brighter lights on Obama’s board, like Warren Buffett and former SEC Chairman William Donaldson, come with asterisks. Buffett was on the audit committee of Coca-Cola Co.’s board when the SEC found the soft-drink maker had misled investors about its earnings. Donaldson was on the audit committee from 1998 to 2001 at a provider of free e-mail services called Mail.com Inc. Just before he left the SEC, in 2005, the agency disciplined the company over accounting violations that had occurred on his watch.

So, by my tally, almost half the people on Obama’s economic advisory board have held fiduciary positions at companies that, to one degree or another, either fried their financial statements, helped send the world into an economic tailspin, or both. Do you think any of that came up in the vetting?

Let’s say we give Buffett a pass — smart move he made, skipping the group photo-op last week in Chicago. What about the rest of them? Donaldson, for one, was chairman when the SEC voted in 2004 to let the big Wall Street banks, including Lehman Brothers Holdings Inc. and Bear Stearns Cos., lever up their balance sheets like drunks. Talk about blowing it.

And whom did Obama tap for White House chief of staff? Rahm Emanuel, the Illinois congressman who was a director at Freddie Mac in 2000 and 2001 while it was committing accounting fraud.

Ideally, this job would go to someone who can’t be easily fooled. Think about it: Of all the people Obama could have chosen as his chief of staff, couldn’t he have found someone who wasn’t once on the board of Freddie Mac?

The president-elect needs some new advisers — fast. We are in a crisis of confidence in American capitalism. These aren’t the right people to re-instill its sense of honor.

Many of them should be getting subpoenas as material witnesses right about now, not places in Obama’s inner circle. Did Obama learn nothing from the ill-fated choice of James Johnson, the former Fannie Mae boss, to lead his vice- presidential search committee?

Does he think people like Robert Rubin or Richard Parsons will offer any helpful advice on how to stop crooked bankers or sleep-walking directors from sinking our economy? Or that they won’t mistake the nation’s needs for their own corporate interests? Or that the people who helped get us into our long financial nightmare have any clue how to get us out?

Obama has created hope that our nation can stand for all that is good in the world again. It’s not too late to change course.

Start by scrapping this board.

2 Responses to Obama’s Bailout Bunch : Sure Seems Like More of the Same