Patrick Cockburn on Israel : Detachment From Reality is the Norm 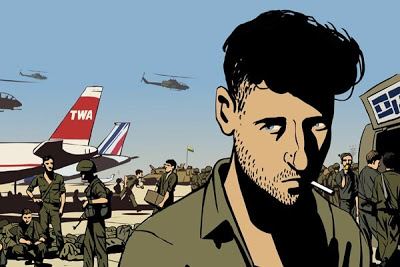 I was watching the superb animated documentary Waltz with Bashir about the Israeli invasion of Lebanon in 1982. It culminates in the massacre of some 1,700 Palestinians in the Sabra and Chatila refugee camps in south Beirut by Christian militiamen introduced there by the Israeli army which observed the butchery from close range.

In the last few minutes the film switches from animation to graphic news footage showing Palestinian women screaming with grief and horror as they discover the bullet-riddled bodies of their families. Then, just behind the women, I saw myself walking with a small group of journalists who had arrived in the camp soon after the killings had stopped.

The film is about how the director, Ari Folman, who knew he was at Sabra and Chatila as an Israeli soldier, tried to discover both why he had repressed all memory of what happened to him and the degree of Israeli complicity in the massacre.

Walking out of the cinema, I realised that I had largely repressed my own memories of that ghastly day. I could not even find a clipping in old scrapbooks of the article I had written about what I had seen for the Financial Times for whom I then worked. Even now my memory is hazy and episodic, though I can clearly recall the sickly sweet smell of bodies beginning to decompose, the flies clustering around the eyes of the dead women and children, and the blood-smeared limbs and heads sticking out of banks of brown earth heaped up by bulldozers in a half-hearted attempt to bury the corpses.

Soon after seeing Waltz with Bashir I saw TV pictures of the broken bodies of the Palestinians killed by Israeli bombs and shells in Gaza during the 22-day bombardment. At first I thought that little had changed since Sabra and Chatila. Once again there were the same tired and offensive excuses that Israel was somehow not to blame. Hamas was using civilians as human shields, and in any case – this argument produced more furtively – two-thirds of people in Gaza had voted for Hamas so they deserved whatever happened to them.

But on returning to Jerusalem 10 years after I was stationed here as The Independent’s correspondent between 1995 and 1999 I find that Israel has changed significantly for the worse. There is far less dissent than there used to be and such dissent is more often treated as disloyalty.

Israeli society was always introverted but these days it reminds me more than ever of the Unionists in Northern Ireland in the late 1960s or the Lebanese Christians in the 1970s. Like Israel, both were communities with a highly developed siege mentality which led them always to see themselves as victims even when they were killing other people. There were no regrets or even knowledge of what they inflicted on others and therefore any retaliation by the other side appeared as unprovoked aggression inspired by unreasoning hate.

At Sabra and Chatila the first journalist to find out about the massacre was an Israeli and he desperately tried to get it stopped. This would not happen today because Israeli journalists, along with all foreign journalists, were banned from entering Gaza before the Israeli bombardment started. This has made it far easier for the government to sell the official line about what a great success the operation has been.

Nobody believes propaganda so much as the propagandist so Israel’s view of the outside world is increasingly detached from reality. One academic was quoted as saying that Arabs took all their views about was happening in Israel from what Israelis said about themselves. So if Israelis said they had won in Gaza, unlike Lebanon in 2006, Arabs would believe this and Israeli deterrence would thereby be magically restored.

Intolerance of dissent has grown and may soon get a great deal worse. Benjamin Netanyahu, who helped bury the Oslo accords with the Palestinians when he was last prime minister from 1996 to 1999, is likely to win the Israeli election on 10 February. The only issue still in doubt is the extent of the gains of the extreme right.

The views of these were on display this week as Avigdor Lieberman, the chairman of the Ysrael Beitenu party, which, according to the polls will do particularly well in the election, was supporting the disqualification of two Israeli Arab parties from standing in the election. “For the first time we are examining the boundary between loyalty and disloyalty,” he threatened their representatives. “We’ll deal with you like we dealt with Hamas.”

[Patrick Cockburn is the author of ‘The Occupation: War, resistance and daily life in Iraq’, a finalist for the National Book Critics’ Circle Award for best non-fiction book of 2006. His new book ‘Muqtada! Muqtada al-Sadr, the Shia revival and the struggle for Iraq’ is published by Scribner.]