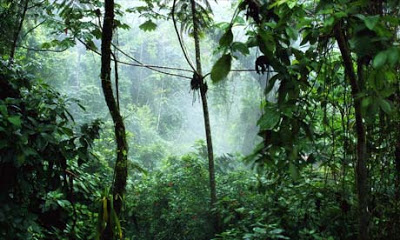 Huge parts of Peru’s rainforest are threatened by government deals with several multinationals. Photo by / Paul A Souders / Corbis.

Ecology and culture at stake say environmentalists, as government plans to exploit rainforest for oil, gas and timber.

Peru’s army is poised to deploy in the Amazon rainforest to lift blockades across rivers and roads by indigenous people opposed to oil, gas, logging and mining projects.

The government has authorised the military to move into remote provinces where a state of emergency has been declared in the wake of a month-long stand-off between indigenous people and police.

President Alan Garcia said the state had the right and responsibility to develop mineral and hydrocarbon wealth to benefit all Peruvians. “We have to understand that when there are resources like oil, gas and timber, they don’t belong only to the people who had the fortune to be born there because that would mean more than half of Peru’s territory belongs to a few thousand people.”

In the past two years the centre-right government has signed deals with multinationals to open swaths of rainforest, including a £1.3bn agreement last month with the Anglo-French oil company Perenco.

Indigenous groups, backed by environmentalists and Catholic bishops, have protested that the developments will devastate the area’s ecology and their culture.

About 65 tribes have mobilised 30,000 people to disrupt roads, waterways and pipelines, leading to skirmishes with police. Up to 41 vessels serving energy companies are stuck along jungle rivers, paralysed by the protests, one private sector source told Reuters.

One of the most tense areas is along the Napo river in northern Peru, said Survival International, a London-based rights advocacy group. “After local indigenous people blockaded the river with a nylon cable, a naval gunboat and three boats belonging to Perenco broke through the blockade, sinking some of the protesters’ canoes in the process.”

The National Organisation of the Amazon Indigenous people of Peru said last week’s declaration of a state of emergency, which suspended some constitutional rights in four jungle provinces, amounted to a declaration of war by the government.

The group responded by calling for an “insurgency” but retracted the term on Saturday after being threatened with 10 years in jail for sedition. Protests will continue but within the rule of law, it said.

The Peruvian rainforest is the largest swath of Amazon outside Brazil. According to one study oil, gas and timber deals would cover an estimated 70% of the forest.

The government says such developments are needed to boost economic growth and state revenues in one of South America’s poorest countries. The projects, which could turn Peru into a net oil exporter, are in line with a free trade deal with the United States.

Alberto Pizango, an indigenous leader, said the tribes – who claim the forest as ancestral land – were not seeking a blanket ban on projects. “What we want is development from our perspective.”

Each side has blamed the other for breakdown in negotiations.