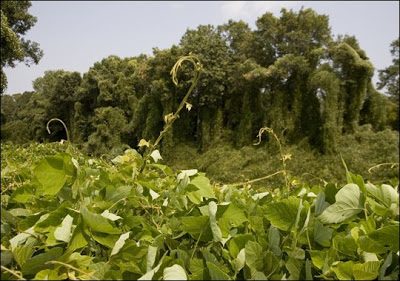 Good for Something? The kudzu vine, also known as “the plant that ate the South,” was brought from eastern Asia in 1876, can grow more than 6.5 feet a week. Because of its high biomass and resilience, kudzu is being considered by some researchers as a potential biofuel. Photo from Getty Images.
Kudzu Gets Kudos as a Potential Biofuel
By Jessica Marshall / June 16, 2008

As concerns rise over corn ethanol creating competition between food and fuels, ethanol made from one of the country’s most invasive plants — kudzu — could be part of the solution, according to Rowan Sage of the University of Toronto and colleagues at the U.S. Department of Agriculture.

The kudzu vine, also known as “the plant that ate the South,” was brought from eastern Asia in 1876 and can grow more than 6.5 feet a week. Its starchy roots plunge deep into the soil, and just a fragment of the plant remaining in the ground is enough to allow it to come back next season.

“Kudzu is just a large amount of carbohydrate sitting below ground waiting for anyone to come along and dig it up,” Sage said. “The question is, is it worthwhile to dig it up?”

His team gathered samples of kudzu from different locations in the south at different times of year and measured the amount of carbohydrate — which can be converted into ethanol by yeast — present in leaves, vines and roots.

The roots were by far the largest source of carbohydrate in the plant: up to 68 percent carbohydrate by dry weight, compared to a few percent in leaves and vines.

The researchers estimate that kudzu could produce 2.2 to 5.3 tons of carbohydrate per acre in much of the South, or about 270 gallons per acre of ethanol, which is comparable to the yield for corn of 210 to 320 gallons per acre. They recently published their findings in Biomass and Bioenergy.

Crucial to making the plan work would be figuring out whether kudzu could be economically harvested, especially the roots, which can be thick and grow more than six feet deep. To balance this expense, Sage said, the plant requires zero planting, fertilizer or irrigation costs.

Even if equipment could harvest the roots, a large fraction of kudzu vines blanket steep hillsides and would be difficult to access. The team estimated that about one-third of kudzu plants would be harvestable. If so, they calculate that kudzu could offer about 8 percent of the 2006 U.S. bioethanol supply.

“It’s not going to solve anybody’s energy crisis, but it would be a useful supplement,” Sage said.

“You could use it to get rid of the kudzu,” he said, “or, alternatively, you could let it regenerate naturally, and just walk away and then come back and do it again in a few years.”

“There is a conundrum there,” said Irwin Forseth of the University of Maryland in College Park. “Unless you’re going to let it come back and devote some land to cultivating it, it wouldn’t form a stable source. You wouldn’t want to put in a stable infrastructure and work out how to extract it from roots to have it go away after three years.”

However, if existing corn ethanol manufacturing plants could be used to process kudzu, too, then the approach might be feasible, Forseth said.

Bob Tanner of Vanderbilt University in Nashville, Tenn., proposed using kudzu for energy in the energy crisis of the 1970s, but he now suggests that the starch, which is used as a gelling product in food in Japan, carries a higher value as a food product.

He advocates using the starch for food and converting the cellulose — the woody, fibrous carbohydrate that gives structure to the stems and leaves — into ethanol once processes under development are commercially available.

The fibers also make fine textiles, Tanner said. “My suggestion is, be creative. Don’t cuss at it. Use it creatively.”