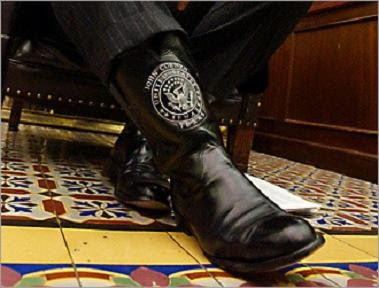 “Big John” Cornyn. Now that’s a big one, all right. The junior senator from Texas with the ultra-conservative voting record — known to Dubya as “Corn Dog” and to the rest of us as the president’s “lap dog” because he faithfully does his master’s bidding — may be meeting his match when he faces soldier-statesman Democrat Rick Noriega in the general election.

In the meantime, let him think he’s “Big John.” Just hope he doesn’t fall off that horse.

“My staff convinced me it was a good idea…Maybe I need a new staff.”

Those words were spoken by Texas Senator John Cornyn after his staff produced the attached video. Intended as an introduction to the Republican Party of Texas state convention, the video, featuring awesomely overwrought voice overs and the most stoned gospel chorus ever assembled, basically depicts Cornyn as a dull-witted rodeo clown who never descends from his horse or stops dressing like Jon Voight in Midnight Cowboy.

The Austin-American Statesman finds Cornyn gamely attempting to defend the terrible video, saying, “It’s actually an attempt to bring a little humor to a subject I take very seriously. We’re going to have to think differently this year, work smarter and harder, and bury the ‘same-ole, same-ole’ politics of the past.” By which he means: do everything in super, super, super, super slow-motion, apparently.

Holly Shulman, press secretary to Rick Noriega, the Democratic nominee challenging Cornyn in November, responded: “Cornyn’s call for change today is ironic given his long record of serving Washington special interests instead of Texas families. Texas families are demanding real change – and real solutions to their every day problems. Texans need a senator who will take action, not just be a rubber stamp for the Bush administration’s failed policies as this junior senator has been for the entirety of his time in office.”

Judge the cowboy — uh, video — for yourself.