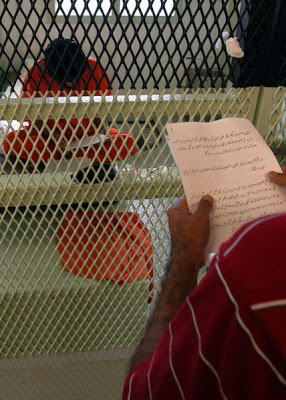 NEW YORK — Lawyers for a Guantanamo detainee who claims he was held and tortured in one of the “black site” secret prisons run by the U.S. Central Intelligence Agency is demanding that the CIA preserve cells and interrogation paraphernalia there as evidence of mistreatment.

Disclosure of the letter came on the heels of Thursday’s release of four more top-secret “legal memoranda” prepared by the Justice Department’s Office of Legal Counsel during the administration of former President George W. Bush. The memos approved “enhanced” interrogation techniques they claimed were not torture – a claim rejected by both the Barack Obama administration and human rights advocates. Nine other OLC memos were previously released by the Obama administration.

OLC is the DOJ office that provides authoritative legal advice to the president and all executive branch agencies. It drafts legal opinions of the attorney general and also provides its own written opinions and oral advice in response to requests from the executive branch.

Al-Nashiri, who is now detained at Guantánamo, was held in the secret CIA prison facilities from 2002 to 2006. While President Obama has ordered the closure of CIA black sites, al-Nashiri’s attorneys are concerned that the CIA intends to destroy the sites, including the buildings and the equipment used to interrogate and torture al-Nashiri and other detainees. They say that would amount to destroying evidence of his mistreatment.

Panetta told CIA personnel on April 9, 2009, that the CIA would be “decommissioning” the CIA secret facilities. The letter asks Panetta to “preserve all the secret sites.”

The CIA has admitted that al-Nashiri was subjected to waterboarding while in CIA custody. Videotapes depicting his abusive interrogations have already been destroyed by the agency and are the subject of ongoing litigation by the American Civil Liberties Union (ACLU).

Through its John Adams Project with the National Association of Criminal Defense Lawyers, the ACLU worked with under-resourced military lawyers to provide legal counsel for several of the Guantánamo detainees including al-Nashiri during the military commissions process.

The lawyers’ letter put Panetta “on notice that we will be seeking discovery and inspection of this highly relevant evidence in whatever court Mr. Al-Nashiri finds himself.” 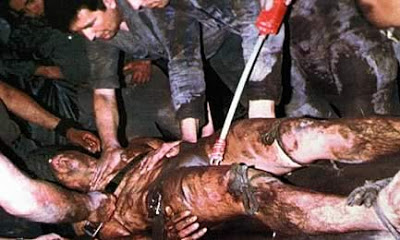 The lawyers added, “We have already lost the video tapes which would have allowed a jury to see what happened to Mr. Al-Nashiri in those secret prisons. We cannot lose the remaining tangible evidence of the actual prisons themselves and the instruments of torture within them.”

They note that Panetta’s predecessor, General Michael V. Hayden, has admitted that Mr. Al-Nashiri was subjected to waterboarding, “which is a form of torture, while in the custody of the CIA.”

According to the recently released report from the International Committee of the Red Cross (ICRC), ‘waterboarding was only one of the many forms of torture inflicted on Mr. Al-Nashiri while in the custody of the CIA,” the lawyers’ letter said.

They claim that, according to the ICRC report, “While in CIA custody, Mr. Al-Nashiri was also forced to stand with his wrists shackled to a bar in the ceiling for prolonged periods of time – extending to several days – and was threatened with sodomy and with the rape and arrest of his family members.”

Throughout that time, the letter says, Al-Nashiri “was not able to communicate with his family, a lawyer or anyone. Effectively the CIA ‘disappeared’ him for four years while it tortured him at will and beyond the eyes of the world.”

It concludes, “Had Mr. Al-Nashiri known that the CIA possessed these video tapes and intended to destroy them, he would have demanded their preservation. However, neither he, his lawyers nor the courts learned of the CIA’s plan until after the tapes had been destroyed and now they are forever gone.”

“Although we welcome your decision to cease the secret detention and mistreatment of prisoners of the United States Government, we are concerned that the CIA intends to actually destroy the sites – including the buildings and the equipment used to interrogate and torture Mr. Al-Nashiri – before Mr. Al-Nashiri has had the opportunity to fully investigate his conditions of confinement. We write to avoid the destruction of more evidence – namely the actual secret facilities themselves,” the lawyers wrote.

Al-Nashiri was charged in the military commission with offences that carried the death penalty. His lawyers note that, “Although those charges have now been dismissed, we fully expect the government to prosecute Mr. Al-Nashiri and again charge him with offenses that could carry the death penalty. In fact the government is now actively working to determine in what forum he will be prosecuted.”

Evidence held by the CIA “is exculpatory evidence” and Al-Nashiri “will be entitled to it.”

The letter concludes: “The CIA’s secret prison facilities and the inquisition-like treatment meted out to its prisoners were a tragic, immoral and illegal period in our history that we all hope has come to an end. But its effects are enduring, especially on someone like Mr. Al-Nashiri who, according to the ICRC report, lived through the horror chambers of at least three different secret prisons.”

Following Thursday’s release of the four OLC memos, it is likely that the government’s treatment of detainees will attract increased public scrutiny – despite President Obama’s pledge to close Guantanamo Bay and CIA black site prisons.

Continuing concern about U.S. credibility in war-on-terror detentions and prosecutions has been voiced by many U.S. legal scholars. David Cole, one of the country’s preeminent constitutional authorities, told IPS, “For better or worse, the U.S. is a world leader on matters of human rights. When the U.S. violates human rights in the fight against terrorism, it sends a message to autocrats and dictators worldwide that they, too, can deny human rights in the name of counterterrorism.”