Reducing All But A Few Fortunate Americans to Debt Slavery 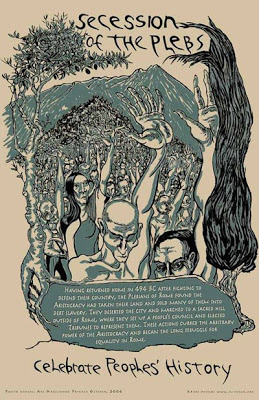 The Indentured States of America
By Jerome Doolittle / August 18, 2008

As we enter the perfect economic storm, it’s important (though too late) to realize that none of this is an accident. It is all the result of careful long-term planning by our masters on Wall Street and Main Street.

Easy consumer credit, the legalization of usury, the federal deficit, the subprime mess, privatization, the strangling of unions, the collapse of the middle class, deregulation, the lotteries and casinos, the tax code, our nationwide gulag, our broken health care system — these are means to an end.

That end is to reduce all but a few fortunate Americans to debt slavery. It is to make the rest of us into indentured servants, and the process is nearly complete.

Read the whole essay by Thomas Frank from which this comes:

The longing for permanent victory over liberalism is not unique to the west. In country after country, business elites have come up with ingenious ways to limit the public’s political choices. One of the most effective of these has been massive public debt. Naomi Klein has pointed out, in case after case, that the burden of debt has forced democratic countries to accept a laissez-faire system that they find deeply distasteful. Regardless of who borrowed the money, these debts must be repaid — and repaying them, in turn, means that a nation must agree to restructure its economy the way bankers bid: by deregulating, privatizing and cutting spending.

Republicans have ridden to power again and again promising balanced budgets — government debt was “mortgaging our future,” Ronald Reagan admonished in his inaugural address — but once in office they proceed, with a combination of tax cuts and spending increases, to inflate the federal deficit to levels far beyond those reached by their supposedly open-handed liberal rivals. The formal justification is one of the all-time great hoaxes. By cutting taxes, it is said, you will unleash such economic growth that federal revenues will actually increase, so all the additional government spending will be paid for.

Even the theory’s proponents don’t really believe it. David Stockman, the libertarian budget director of the first Reagan administration, did the maths in 1980 and realized it would not rescue the government; it would wreck the government. This is the point where most people would walk away. Instead, Stockman decided it had medicinal value. He realized that with their government brought to the brink of fiscal collapse, the liberals would either have to acquiesce in the reconfiguration of the state or else see the country destroyed. Stockman was candid about this: the left would “have to dismantle [the government’s] bloated, wasteful, and unjust spending enterprises — or risk national ruin.”

This is government-by-sabotage: deficits were a way to smash a liberal state. The Reagan deficits did precisely this. When Reagan took over in 1981, he inherited an annual deficit of $59 billion and a national debt of $914 billion; by the time he and his successor George Bush had finished their work, they had quintupled the deficit and pumped the debt up to more than $3 trillion.

This entry was posted in RagBlog and tagged Banking, Economy, U.S. Government. Bookmark the permalink.