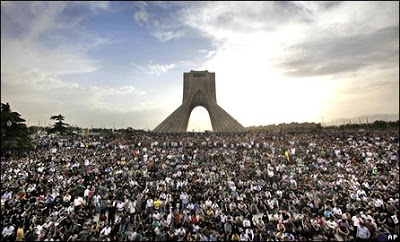 Not since the 1979 Iranian Revolution have massed protesters gathered in such numbers, or with such overwhelming popularity, through the boulevards of this torrid, despairing city.

It was Iran’s day of destiny and day of courage. A million of its people marched from Engelob Square to Azadi Square — from the Square of Revolution to the Square of Freedom — beneath the eyes of Tehran’s brutal riot police. The crowds were singing and shouting and laughing and abusing their “President” as “dust.”

Mirhossein Mousavi was among them, riding atop a car amid the exhaust smoke and heat, unsmiling, stunned, unaware that so epic a demonstration could blossom amid the hopelessness of Iran’s post-election bloodshed. He may have officially lost last Friday’s election, but yesterday was his electoral victory parade through the streets of his capital. It ended, inevitably, in gunfire and blood.

Not since the 1979 Iranian Revolution have massed protesters gathered in such numbers, or with such overwhelming popularity, through the boulevards of this torrid, despairing city. They jostled and pushed and crowded through narrow lanes to reach the main highway and then found riot police in steel helmets and batons lined on each side. The people ignored them all. And the cops, horribly outnumbered by these tens of thousands, smiled sheepishly and — to our astonishment –- nodded their heads towards the men and women demanding freedom. Who would have believed the government had banned this march?

The protesters’ bravery was all the more staggering because many had already learned of the savage killing of five Iranians on the campus of Tehran University, done to death — according to students — by pistol-firing Basiji militiamen. When I reached the gates of the college yesterday morning, many students were weeping behind the iron fence of the campus, shouting “massacre” and throwing a black cloth across the mesh. That was when the riot police returned and charged into the university grounds once more.

At times, Mousavi’s victory march threatened to crush us amid walls of chanting men and women. They fell into the storm drains and stumbled over broken trees and tried to keep pace with his vehicle, vast streamers of green linen strung out in front of their political leader’s car. They sang in unison, over and over, the same words: “Tanks, guns, Basiji, you have no effect now.” As the government’s helicopters roared overhead, these thousands looked upwards and bayed above the clatter of rotor blades: “Where is my vote?” Clichés come easily during such titanic days, but this was truly a historic moment.

Would it change the arrogance of power which Mahmoud Ahmadinejad demonstrated so rashly just a day earlier, when he loftily invited the opposition — there were reported to be huge crowds protesting on the streets of other Iranian cities yesterday — to be his “friends,” while talking ominously of the “red light” through which Mousavi had driven. Ahmadinejad claimed a 66 per cent victory at the polls, giving Mousavi scarcely 33 per cent. No wonder the crowds yesterday were also singing — and I mean actually singing in chorus — “They have stolen our vote and now they are using it against us.”

A heavy and benevolent dust fell over us all as we trekked the great highway towards the fearful pyramid of concrete which the Shah once built to honour his father and which the 1979 revolutionaries re-named Freedom Square. Behind us, among the stragglers, stones began to burst on to the road as Basijis besieged the Sharif University (they seem to have something against colleges of further education these days) and one man collapsed on the road, his face covered in blood. But on the great mass of people moved, waving their green flags and shouting in joy at the thousands of Iranians who stood along the rooftops.

On the right, they all saw an old people’s home and out on to the balcony came the aged and the crippled who must have remembered the reign of the loathed Shah, perhaps even his creepy father, Reza Khan. A woman who must have been 90 waved a green handkerchief and an even older man emerged on the narrow balcony and waved his crutch in the air. The thousands below them shrieked back their joy at this ancient man.

Walking beside this vast flood of humanity, a strange fearlessness possessed us all. Who would dare attack them now? What government could deny a people of this size and determination? Dangerous questions.

By dusk, the Basiji were being chased by hundreds of protesters in the west of the city but shooting was crackling around the suburbs after dark. Those who were fatally too late in leaving Azadi, were fired on by the Basiji. One dead, thousands in panic, we heard behind us.

After every day of sunlight, there usually comes a perilous darkness and perhaps it was prefigured by the strange grey cloud that approached us all as we drew closer to Azadi Square yesterday afternoon. Many of the thousands of people around me noticed it and, burned by the afternoon sun, seemed to walk faster to embrace its shade. Then it rained, it poured, it soaked us. There is a faint rainy season in mid-summer Tehran but it had arrived early, sunlight arcing through the clouds like the horizon in a Biblical painting.

Moin, a student of chemical engineering at Tehran University — the same campus where blood had been shed just a few hours before — was walking beside me and singing in Persian as the rain pelted down. I asked him to translate.

“It’s a poem by Sohrab Sepehri, one of our modern poets,” he said. Could this be real, I asked myself? Do they really sing poems in Tehran when they are trying to change history? Here is what he was singing:

“We should go under the rain.
We should wash our eyes,
And we should see the world in a different way.”

He grinned at me and at his two student friends. “The next line is about making love to a woman in the rain, but that doesn’t seem very suitable here.” We all agreed. Our feet hurt. We were still tripping over manhole covers and kerbstones hidden beneath men’s feet and women’s chadors. For this was not just the trendy, young, sunglassed ladies of north Tehran. The poor were here, too, the street workers and middle-aged ladies in full chador. A very few held babies on their shoulders or children by the arm, talking to them from time to time, trying to explain the significance of this day to a mind that would not remember it in the years to come that they were here on this day of days.

The vast Azadi monument appeared through the grey light like a spaceship — we had been walking for four miles — and Moin and his friends spent an hour squeezing through a body of humanity so dense that my chest was about to be crushed. Around the monument, the Shah had long ago built a grassed rampart. We struggled to its height and there, suddenly, was the breathtaking nature of it all. Readers who have seen the film Atonement will remember the scene where the British hero-soldier climbs a sand-dune and suddenly beholds those thousands on the beaches of Dunkirk. This was no less awesome.

Amid the great basin of grass and concrete that surrounds the monument were a thousand souls, moving and swaying and singing in the new post-rain sunlight. There must have been at least a million, and — here one struggles for a metaphor — it was like a vast animal, a great heaving beast that breathed and roared and moved sluggishly beneath that monstrous arrow of concrete. Moin and his friends lay on the grass, smoking cigarettes. They asked each other if the Supreme Leader would understand what this meant for Iran. “He’s got to hold the elections again,” one of Moin’s friends told him. They looked at me. Don’t ask a foreigner, I said. Because I’m not so sure that the fathers of the 1979 revolution will look so kindly upon this self-evident demand for freedom.

True, Ayatollah Ali Khamenei, the Supreme Leader — how antiquated that title sounded yesterday — had agreed to enquire into the election results, perhaps to look over a polling statistic or two. But Ahmadinejad, despite his obtuseness and his unending smile, is a tough guy in a tough clerical environment. His glorious predecessor, Hojatolislam Mohamed Khatami, was somewhere down there amid the crowds, along with Mousavi and Mousavi’s wife Zahra Rahnavard, but they could not protect these people.

Government is not about good guys and bad guys. It is about power, state and political power — they are not the same — and unless those wanly smiling riot police move across to the opposition, the weapons of the Islamic Republic remain in the hands of Ahmadinejad’s administration and his spiritual protectors. As, no doubt, we shall soon see.