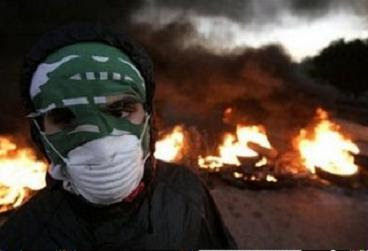 Photo by Michael Totten
So Just Where Does the Madness End?
All the monsters buried in the mass graves of the civil war have been dug up
by Robert Fisk / May 17, 2008

I am not sure what was the worse part of this week. Living in Lebanon? Or reading the outrageous words of George Bush? Several times, I have asked myself this question: have words lost their meaning?

So let’s start with lunch at the Cocteau restaurant in Beirut. Yes, it’s named after Jean Cocteau, and it is one of the chicest places in town. Magnificent flowers on the table, impeccable service, wonderful food. Yes, there was shooting at Sodeco — 20 yards away — the day before; yes, we were already worried about the virtual collapse of the Lebanese government, the humiliation of Sunni Muslims (and the Saudis) in the face of what we must acknowledge as a Hizbollah victory (don’t expect George Bush to understand this) and the danger of more street shooting. But I brought up the tiny matter of the little massacre in northern Lebanon in which 10 or 12 militiamen were captured and then murdered before being handed over to the Lebanese army. Their bodies were — I fear this is correct — mutilated after death.

“They deserved it,” the elegant woman on my left said. I was appalled, overwhelmed, disgusted, deeply saddened. How could she say such a thing? But this is Lebanon and a huge number of people — 62 by my count — have been killed in the past few days and all the monsters buried in the mass graves of the civil war have been dug up.

I chose escalope du veau at the Cocteau — I am sickened by how quickly I decided on it — and tried to explain to my dear Lebanese friends (and they are all dear to me) how much fury I have witnessed in Lebanon.

When Abed drove me up to the north of the country three days ago, bullets were spitting off the walls of Tripoli and one of the customs officials at the Syrian border asked me to stay with him and his friends because they were frightened. I did. They are OK.

But being from the wrong religion is suddenly crucial again. Who your driver is, what is the religion of your landlord, is suddenly a matter of immense importance.

Yesterday morning (and here I will spoil the story by telling the end of it), the schools reopened round my seafront apartment and I saw a woman in a hijab riding a bicycle down the Corniche and I took a call from my travel agent about my next trip to Europe — Beirut airport reopened — and I realised that Lebanon had “returned to normal”.

The roads were open again; the hooded gunmen had disappeared; the government had abandoned its confrontation with Hizbollah — the suspension of the Shia Muslim security chief at the airport (who bought me a bottle of champagne a year ago, I seem to remember — some Hizbollah “agent” he!) and the abandonment of the government’s demand to dismantle Hizbollah’s secret telecommunication system was a final seal of its failure — and I opened my newspaper and what did I read?

That George Bush declared in Jerusalem that “al-Qa’ida, Hizbollah and Hamas will be defeated, as Muslims across the region recognise the emptiness of the terrorists’ vision and the injustice of their cause”.

Where does the madness end? Where do words lose their meaning? Al-Qa’ida is not being defeated. Hizbollah has just won a domestic war in Lebanon, as total as Hamas’s war in Gaza. Afghanistan and Iraq and Lebanon and Gaza are hell disasters — I need no apology to quote Churchill’s description of 1948 Palestine yet again — and this foolish, stupid, vicious man is lying to the world yet again.

He holds a “closed door” meeting with Lord Blair of Kut al-Amara — a man stupendously unfit to run any Middle East “peace”, which is presumably why the meeting had to be “closed door” — but tells the world of the blessings of Israeli democracy. As if the Palestinians benefit from a democracy which is continuing to take from them the land which they have owned for generations.

Do we really have to accept this? Bush tells us that “we consider it a source of shame that the United Nations routinely passes more human rights resolutions against the freest democracy in the Middle East than any other nation in the world”.

The truth is that it is a source of shame that the United States continues to give unfettered permission to Israel to steal Palestinian land — which is why it should be a source of shame (to Washington) that the UN passes human rights resolutions against America’s only real ally in the region.

Read all of it here. / Common Dreams / The Independent

This entry was posted in RagBlog and tagged Bush, Israel, Middle East, Palestine. Bookmark the permalink.