For the fallen from Vietnam, Iraq, Afghanistan, it’s home in a box, family and neighbors gather, a sad requiem, the flag folded, presented to the mother.

Nearly a half century ago this season of remembering the fallen — just after sunset on a hillside along the border of New York and Canada — the sad sounds of taps echoed through the hills and valleys. It was a warm evening summer of ’67 when hundreds of townspeople — nearly everyone living in Ausable Forks, a tiny hamlet of 500 or so souls — came out to pay last respects to a local boy, James Saltmarsh, killed a week earlier in Vietnam.

An honor guard had fired 21 rifle volleys as yet another son of the North Country of upper New York State was laid to rest. Finally, the elegiac lament of the bugle was heard, closing the burial ceremony in the breathtaking High Peaks region of the Adirondack Mountains.

It was just an ordinary rural burial ground, not a hallowed place dedicated to those fallen in America’s wars. Over the years I had become familiar with military cemeteries, having visited several abroad. I rarely came away unaffected by the magisterial simplicity of those solemn places that call to mind legions of eternal youth no longer walking the earth.

My first such experience was while passing through eastern Poland in the ‘60s. I was visiting a Polish colleague at a university near Lublin. He took me for a drive; he wanted to show me something.

We came to a small stately, fenced-in area. Entering, I realized it was a cemetery, but a very unusual one. There was just a single stone obelisk with Cyrillic script, standing guard so to speak, over rows of widely spaced, carefully landscaped low mounds, each with a bronze marker. This was the burial place of hundreds of Soviet soldiers who fell liberating Poland in 1944.

Without a trace of individualization, a fast moving army had buried its dead quickly and collectively.

Without a trace of individualization, a fast moving army had buried its dead quickly and collectively. The men of 8th Guards Army lay with their comrades, regiment by regiment. I was well aware of the staggering Soviet war losses, but still seeing them up close left me stunned.

An even more affecting sight greeted me years later in 1990 on the eve of the collapse of the Soviet Union. Traveling by boat up the Volga, my companions and I went ashore at the place formerly called Stalingrad, the scene of one of history’s legendary battles, where well over a million Soviet and German soldiers met their deaths.

Our Russian guide, a young woman, led us to the Soviet victory memorial, a massive stone building on a bluff above the high banks of river. We entered the structure and were struck by its eight-story circular atrium accessed by an ascending walkway, every inch of the soaring walls carved with names of the dead. Quietly, pointing up the wall, the guide told me her grandfather’s name was inscribed there. What could one say — I bowed my head. To this day recalling the moment still brings a tear.

What of the North Country dead for whom there was no victory. They simply came home to local graveyards in the little towns and villages of the upper reaches of New York State where they grew up, played football, or marched in the band — places of several thousand residents with names like Cape Vincent, Hannibal, Phoenix, Rouses Point, Ticonderoga.

In the small town of Mexico on the shores of Lake Ontario in New York’s Oswego County — resonant with early American history of this part of the country — the local high school had lost three recent graduates in less than a year by fall of ‘67.

The great majority of the North Country dead were not drafted — they had enlisted.

The great majority of the North Country dead were not drafted — they had enlisted. Impelling so many to volunteer for an increasingly unpopular war was a region long in economic decline. Prosperous in the late 18th/early 19th centuries, by the mid-20th the local industries had seen better times.

Logging was greatly restricted, sawmills shuttered, mining played out. Most of the riverside mills were long shut down, their giant water wheels turning aimlessly, as most of the pulp paper companies had moved South in pursuit of cheap labor and less environmental concern.

By the ‘60s, the North Country had become a region of little economic opportunity for the boys coming out of the small town high schools. Sure, there were community colleges scattered throughout the region at which draft deferments awaited, but many of the local guys grew up on farms and had neither interest nor money for pursuing further education.

With Adirondack unemployment 50 percent above the state average, the military beckoned to the young men of the North Country, attracted by the combination of adventure, challenge, and, not least, a paycheck. As one 20-year old enlisting at a local recruiting station put it, “There just isn’t much for a young guy to do.”*

Many of the volunteers had been athletes, opting for the Marines or airborne. Often they virtually went from the football field to distant battlegrounds with exotic names like Dak To, Quang Nam, Khe Sanh — for so many, places of no return.

The journey was all too frequently a short one. Vietnam tours were 12 and 13 months, and when a soldier was done, he could head home, “back to the world” as they called it. Some 58,000 never completed their tours. They’d go off to war — Basic Training, Advanced Infantry Training, deployment to Nam, often cut down by enemy fire or a land mine early tour, mid-tour, and sometimes just weeks before return. Next of kin notified.

During WWII, notification was by the dreaded telegram, the Western Union guy.

During WWII, notification was by the dreaded telegram, the Western Union guy. In modern wars with their “lighter” casualties, the bad news can arrive at warp speed, and is delivered by military personnel. Recently in Mechanicville, New York,  just south of the Adirondacks — by area the smallest town in the state — a middle-aged mother awaited a call from her Marine son.

Since deployment to Afghanistan just weeks earlier, he rang home every Sunday morning at 6 a.m. His mother set the alarm, rose early, but no call. A few hours later a knock at the door — two Marine officers broke the heartbreaking news, her son had been killed 24 hours earlier — shot in the neck, just over a month in-country. She told the press he had wanted to serve in Afghanistan adding, “I’m extremely proud of my son.”** 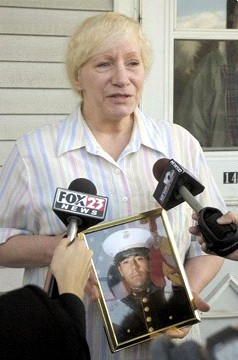 For the fallen from Vietnam, Iraq, Afghanistan, it’s home in a box, family and neighbors gather, a sad requiem, the flag folded, presented to the mother — almost always the mother — the gravediggers at a respectful distance waiting to turn to the final task. What then of the enduring casualties of war, of all wars, those left behind, parents, young wives, fatherless children.

From the mother and father of a Russian soldier killed in the Soviet Afghan War, a final message carved on his tombstone, “Dearest Igor, You left this life without having known it.”*** The lost one is of course buried in the hearts of those who loved him, left now with just memories and photos.

Some years after Vietnam, in a documentary on the war, an older couple was filmed sitting quietly in their living room, a picture of a young man in uniform in a silver frame between them, their only child, a pilot shot down over North Vietnam. Coping with loss, not for them the revisionism of defeat — we shouldn’t have been there, lives wasted — no, the war remained a just cause, their son died doing his duty, they were ever proud.

Or fighting back tears, the same sentiments expressed more recently by the mother of an Afghan GI, Sgt Orion Sparks: “He didn’t shirk any of his years…. I felt honored that he was my son and I was able to be part of his life.”****

Long after the guns go silent…the boy who went to war remains, forever young, in the silver frame on the mantle.

Long after the guns go silent, time passes, rights and wrongs fade — the parents grow old, the young widow remarries, children grow up, move away, but the boy who went to war remains, forever young, in the silver frame on the mantle. The strange poetry of war obits, the military fanfare at graveside, the heartrending notes of taps closing a life — all become distant memory. Pain dulls, never goes away. 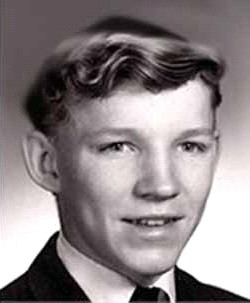 The young men in those picture frames remain unchanged, the boy who went off to war looks as we last remember him. And so it was with my brother Jeff Sharlet who served in Vietnam, was possibly exposed to something there — possibly Agent Purple, we don’t know — and died several years later at 27. For our parents, now long gone, as for all those North Country families, Igor’s parents in Russia, and the mothers of those two Afghan GIs — in spite of reaffirming sentiments — nothing could have been worse than losing a child.

I remember the day we buried Jeff. It was a beautiful sunny June day in ‘69. I sat between my parents as the limo sped along broad avenues toward the cemetery, the hearse flanked by two outriders — booted, helmeted motorcycle policemen in reflecting sunglasses astride big Harleys.

To my distraught mind, two images came to the fore — a scene from the 1950 French film Orpheus when death, a striking woman cloaked in black, arrives by limo, preceded by goggled motorcycle outriders, submachine guns slung, announcing her authority; and then as we approached the gates of the cemetery, the more gentle image from the lines of Emily Dickinson’s poem:

Because I could not stop for Death,
He kindly stopped for me …

Since then ‘tis centuries; but each
Feels shorter than the day
I first surmised the horses’ heads
Were toward eternity.

[Robert Sharlet, a long time academic, is co-authoring a memoir of his brother Jeff — a Vietnam GI and, subsequently, a leader of GI protest against the war — with his son and namesake, Jeff Sharlet, the writer. In the interim, the author writes a biweekly blog, Searching for Jeff.]