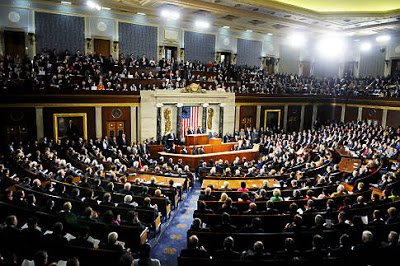 The speech was a distraction from what seriously ails us: an unabated mortgage crisis, stubbornly high unemployment, and a debt that spiraled out of control while the government wasted trillions making the bankers whole.

What is the state of the union? You certainly couldn’t tell from that platitudinous hogwash that the president dished out Tuesday evening. I had expected Barack Obama to be his eloquent self, appealing to our better nature, but instead he was mealy-mouthed in avoiding the tough choices that a leader should delineate in a time of trouble.

He embraced clean air and a faster Internet while ignoring the depth of our economic pain and the Wall Street scoundrels who were responsible — understandably so, since they so prominently populate the highest reaches of his administration. He had the effrontery to condemn “a parade of lobbyists” for rigging government after he appointed the top Washington representative of JPMorgan Chase to be his new chief of staff.

The speech was a distraction from what seriously ails us: an unabated mortgage crisis, stubbornly high unemployment, and a debt that spiraled out of control while the government wasted trillions making the bankers whole. Instead the president conveyed the insular optimism of his fat-cat associates: “We are poised for progress. Two years after the worst recession most of us have ever known, the stock market has come roaring back. Corporate profits are up. The economy is growing again.”

How convenient to ignore the fact that this bubble of prosperity, which has failed the tens of millions losing their homes and jobs, was floated by enormous government indebtedness now forcing deep cuts in social services including state financial aid for those better-educated students the president claims to be so concerned about.

His references to education provided a convenient scapegoat for the failure of the economy, rather than to blame the actions of the Wall Street hustlers to whom Obama is now sucking up. Yes, it is an obvious good to have better-educated students to compete with other economies, but that is hardly the issue of the moment when all of the world’s economies are suffering grievous harm resulting from the irresponsible behavior of the best and the brightest here at home.

It wasn’t the students struggling at community colleges who came up with the financial gimmicks that produced the Great Recession, but rather the super-whiz-kid graduates of the top business and law schools.

What nonsense to insist that low public school test scores hobbled our economy when it was the highest-achieving graduates of our elite colleges who designed and sold the financial gimmicks that created this crisis. Indeed, some of the folks who once designed the phony mathematical formulas underwriting subprime mortgage-based derivatives won Nobel prizes for their effort. A pioneer in the securitization of mortgage debt, as well as exporting jobs abroad, was one Jeffrey Immelt, the CEO of GE, whom Obama recently appointed to head his new job creation panel.

That the financial meltdown at the heart of our economic crisis was “avoidable” and not the result of long-run economic problems related to education and foreign competition is detailed in a sweeping report by the Democratic majority on the Financial Crisis Inquiry Commission to be released as a 576-page book on Thursday. In a preview reported in The New York Times, the commission concluded: “The greatest tragedy would be to accept the refrain that no one could have seen this coming and thus nothing could have been done. If we accept this notion, it will happen again.”

Just the warning that Obama has ignored by continually appointing the very people who engineered this crisis, mostly Clinton alums, to reverse its ongoing dire consequences. As the Times reports: “The decision in 2000 to shield the exotic financial instruments known as over-the-counter derivatives from regulation, made during the last year of President Bill Clinton’s term, is called ‘a key turning point in the march toward the financial crisis.’ ”

Obama appointed as his top economic adviser Lawrence Summers, who as Clinton’s treasury secretary was the key architect of that “turning point,” and Summers protégé Timothy Geithner as his own treasury secretary. The unanimous finding of the 10 Democrats on the commission is that Geithner, who had been president of the New York Fed before Obama appointed him, “could have clamped down” on excesses by Citigroup, the subprime mortgage leader that Geithner and the Fed bailed out along with other unworthy banking supplicants.

Profligate behavior that has hobbled the economy while running up an enormous debt that Obama now uses as an excuse for a five-year freeze on discretionary domestic spending cuts, that small part of the budget that might actually help ordinary people. Speaking of our legacy of deficit spending, Obama stated, “…in the wake of the financial crisis, some of that was necessary to keep credit flowing, save jobs, and put money in people’s pockets. But now that the worst of the recession is over, we have to confront the fact that our government spends more than it takes in.”

Why now? It is an absurd demarcation to freeze spending when so many remain unemployed just because corporate profits, and therefore stock market valuations, seem firm. Ours is a union divided between those who agree with Obama that “the worst of the recession is over” and the far larger number in deep pain that this president is bent on ignoring.

[Robert Scheer, editor in chief of Truthdig, has built a reputation for strong social and political writing over his 30 years as a journalist. Sheer, who conducted the famous Playboy magazine interview in which Jimmy Carter confessed to the lust in his heart, was editor of Ramparts and national corespondent for the Los Angeles Times. Sheer, who has written nine books, is clinical professor of communications at the University of Southern California’s Annenberg School for Communication and Journalism.]