Salary Bonuses Constitute 10% of the Bailout 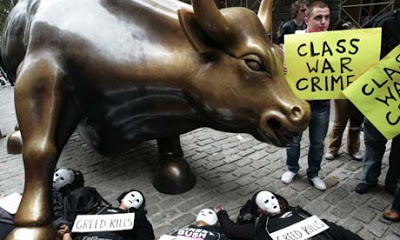 Financial workers at Wall Street’s top banks are to receive pay deals worth more than $70bn (£40bn), a substantial proportion of which is expected to be paid in discretionary bonuses, for their work so far this year – despite plunging the global financial system into its worst crisis since the 1929 stock market crash, the Guardian has learned.

Staff at six banks including Goldman Sachs and Citigroup are in line to pick up the payouts despite being the beneficiaries of a $700bn bail-out from the US government that has already prompted criticism. The government’s cash has been poured in on the condition that excessive executive pay would be curbed.

Pay plans for bankers have been disclosed in recent corporate statements. Pressure on the US firms to review preparations for annual bonuses increased yesterday when Germany’s Deutsche Bank said many of its leading traders would join Josef Ackermann, its chief executive, in waiving millions of euros in annual payouts.

The sums that continue to be spent by Wall Street firms on payroll, payoffs and, most controversially, bonuses appear to bear no relation to the losses incurred by investors in the banks. Shares in Citigroup and Goldman Sachs have declined by more than 45% since the start of the year. Merrill Lynch and Morgan Stanley have fallen by more than 60%. JP MorganChase fell 6.4% and Lehman Brothers has collapsed.

At one point last week the Morgan Stanley $10.7bn pay pot for the year to date was greater than the entire stock market value of the business. In effect, staff, on receiving their remuneration, could club together and buy the bank.

In the first nine months of the year Citigroup, which employs thousands of staff in the UK, accrued $25.9bn for salaries and bonuses, an increase on the previous year of 4%. Earlier this week the bank accepted a $25bn investment by the US government as part of its bail-out plan.

At Goldman Sachs the figure was $11.4bn, Morgan Stanley $10.73bn, JP Morgan $6.53bn and Merrill Lynch $11.7bn. At Merrill, which was on the point of going bust last month before being taken over by Bank of America, the total accrued in the last quarter grew 76% to $3.49bn. At Morgan Stanley, the amount put aside for staff compensation also grew in the last quarter to the end of August by 3% to $3.7bn.

Days before it collapsed into bankruptcy protection a month ago Lehman Brothers revealed $6.12bn of staff pay plans in its corporate filings. These payouts, the bank insisted, were justified despite net revenue collapsing from $14.9bn to a net outgoing of $64m.

None of the banks the Guardian contacted wished to comment on the record about their pay plans. But behind the scenes, one source said: “For a normal person the salaries are very high and the bonuses seem even higher. But in this world you get a top bonus for top performance, a medium bonus for mediocre performance and a much smaller bonus if you don’t do so well.”

Many critics of investment banks have questioned why firms continue to siphon off billions of dollars of bank earnings into bonus pools rather than using the funds to shore up the capital position of the crisis-stricken institutions. One source said: “That’s a fair question – and it may well be that by the end of the year the banks start review the situation.”

Much of the anger about investment banking bonuses has focused on boardroom executives such as former Lehman boss Dick Fuld, who was paid $485m in salary, bonuses and options between 2000 and 2007.

Last year Merrill Lynch’s chairman Stan O’Neal retired after announcing losses of $8bn, taking a final pay deal worth $161m. Citigroup boss Chuck Prince left last year with a $38m in bonuses, shares and options after multibillion-dollar write-downs. In Britain, Bob Diamond, Barclays president, is one of the few investment bankers whose pay is public. Last year he received a salary of £250,000, but his total pay, including bonuses, reached £36m.

And a former Goldman Sachs Republican hotshot got the job to stabilize the financial markets: 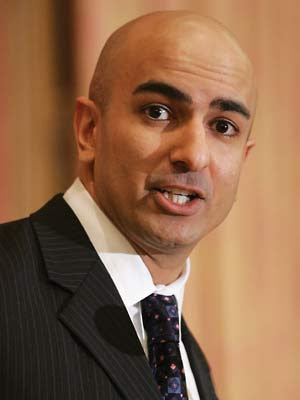 His name is not exactly familiar and his official title is a bit much — Interim Assistant Secretary of the Treasury for Financial Stability and Assistant Secretary of the Treasury for International Economics and Development — but 35-year-old Neel Kashkari is now one of the most powerful people in the global economy. As the head of the new Office of Financial Stability, it’s his job to start spending the $700 billion Congress approved to stabilize the financial system.

As some commentators enjoy pointing out, Kashkari is a former rocket scientist, having earned Bachelor’s and Master’s degree in engineering from the University of Illinois and worked as a mechanical engineer at TRW, where he developed latches for the the Next Generation Space Telescope. He left engineering for finance, parlaying an MBA from Wharton into a gig at Goldman Sachs (NYSE: GS), where he rose to Vice President, specializing in information technology investment banking.

So there’s little doubt that he’s a smart and hard-working guy. And in the current administration, that’s a great accomplishment.

But the question isn’t whether Kashkari is smart. The question is whether he has any idea how to use all that money to stabilize the global financial markets. And a quote from Kashkari I dug up does not inspire confidence. In September, at the right-wing American Enterprise Institute, Kashkari reportedly declared, “I’m a free-market Republican.”

It’s no surprise, of course, that a Bush administration official would describe himself as a free-market Republican. But it does suggest that Kashkari may have trouble figuring out how to restore confidence in those supposedly free markets.

It’s important to remember that unregulated free markets in debt instruments is how we got into this mess in the first place. And more generally, it’s pretty clear that the free-market ideology espoused by the Republican party (and embraced by many Democrats too) bears much of the blame for our current economic situation.

Whatever the solution may be, it certainly involves violating free-market principles over and over again. Insolvent banks cannot fail. Worthless assets must be bought and sold. And the government must lead the way.

I’m sure Kashkari is plenty smart enough to create new programs to accomplish these goals. But I’m not sure that he and the people he works for will be willing to violate their own political principles to get the job done in the most effective way. Kashkari was involved in the HOPE NOW Alliance, the Bush administration’s response to the subprime mortgage crisis. By most accounts, HOPE NOW has been a failure, largely because it serves corporate interests more than the needs of subprime mortgage holders. It seems that when pro-business political ideology meets real practical needs, ideology wins out.

Let’s hope Kashkari meets with great success. I just wish other senior managers with a little bit more experience — and a more complex understanding of the politics of the situation — were along for the ride.

This entry was posted in RagBlog and tagged Bank Bailouts, Banking, Corporate Corruption. Bookmark the permalink.

5 Responses to Salary Bonuses Constitute 10% of the Bailout