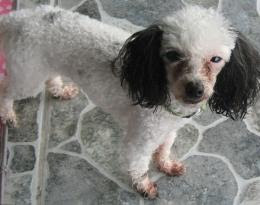 SAN MARCOS, Texas — A police officer who delayed a couple racing their dying dog to an emergency vet clinic while he wrote them a ticket has received death threats, the mayor said Thursday.

A statement issued by San Marcos Mayor Susan Narvaiz said Officer Paul Stephens was inappropriate and insensitive and that he has been disciplined, but the threats against the officer are “extremely unfortunate.”

Narvaiz’ statement did not elaborate on the threats. She did release some new details of the incident, including that a second officer had tried to help the choking dog, a teacup poodle named Missy.

“Without question, the situation was not handled very well by Officer Stephens. But the characterization of the story has led to death threats against the officer and his family,” Narvaiz said.

Michael Gonzalez and Krystal Hernandez were allegedly driving 95 mph when Stephens pulled them over after midnight Aug. 5 on Interstate 35.

According to Narvaiz, Gonzalez first pulled over on an overpass. Using his patrol car public address system, Stephens asked him to go somewhere safer and Gonzalez drove another two miles at a “high rate of speed,” despite the officer’s lights and siren.

When he finally pulled over, Gonzalez pleaded with Stephens to let them get to the clinic.

The patrol car’s dashboard camera showed Stephens telling Gonzalez: “It’s just a dog. You can buy another one. Relax.”

Officer Joyce Bender arrived and approached Hernandez on the passenger side of the car. When told Missy was choking, she took the dog and tried to clear its airway to allow it to breath, but failed, Narvaiz said.

At that point, the officers believed the dog was already dead and Stephens issued the ticket. The incident lasted 17 minutes, Narvaiz said.

Gonzalez and Hernandez filed a complaint the next day and San Marcos Police Chief Howard Williams issued Stephens a reprimand. Williams also wrote a letter of apology to Gonzalez.

Narvaiz said Stephens is an Iraq war vet who joined the department in March 2007 and has no history of previous complaints. She said the discipline for Stephens was appropriate.

Gonzalez said Tuesday he thought an oral reprimand was not sufficient.

“That’s not really a punishment at all,” he said. “I don’t feel a person like that should be working in law enforcement.”