Slow Food Nation : You Are What You Eat 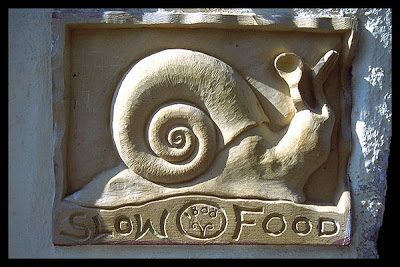 The Slow Food Nation gathering promises to be a Woodstock for food lovers and enviros concerned with our food system.
By Kerry Trueman / August 25

SAN FRANCISCO — A swarm of 40,000 to 50,000 locavores will descend on San Francisco this Labor Day weekend to attend Slow Food Nation, a four-day extravaganza of teach-ins and tastings that’s being billed as a kind of “Woodstock for gastronomes.”

I’d rather go to a Woodstock for garden gnomes, myself — at least those Lilliputian lawn ornaments share my fondness for front yard farming. Gastro gnomes, on the other hand, sound like elitist elves who are overly fond of artisanal cheeses and grass-fed beef. Do we really need a celebration of such highfalutin culinary novelties at a time when high fuel and food costs are making it harder for people to keep their pantries stocked with even the most basic staples?

Well, yes, we do, because we need to remember that the fresh, unadulterated, minimally processed, locally produced foods that Slow Food Nation is showcasing were our pantry staples, before the military-industrial complex annexed our food chain a half a century or so ago in the name of progress.

Our great-grandparents would be flabbergasted to learn that grass-fed milk in glass bottles bearing the local dairy farm’s logo is now a rare luxury item available to only the affluent few who are willing to pay $4 for a half-gallon of milk.

Back in the day, our breads were fresh-baked and free of high fructose corn syrup, and our eggs and bacon came from chickens and hogs that rolled around in the dirt and saw the light of day. The word “farm” still evokes nostalgic pastoral images for most Americans, but there’s nothing even remotely benign or bucolic about the fetid, brutal factory farms that supply us with most of our meat, poultry, eggs and dairy products today. And unmasking this unsavory reality is as much a part of Slow Food Nation’s agrarian agenda as dishing out local delicacies.

So don’t be distracted by the aroma of wood-fired focaccia wafting from the Fort Mason Center “Taste Pavilions”; Slow Food Nation has the potential to spark a crucial dialogue about where our food comes from, how it’s grown, and why all that matters. With forums featuring the good food movement’s marquee names, including Wendell Berry, Vandana Shiva, Michael Pollan, Marion Nestle and Eric Schlosser, this Alice Waters-sponsored shindig could be the watershed event that puts America’s foodsheds on the map.

Don’t know what a “foodshed” is? Don’t worry, nobody else does, either — the word is still so obscure it hasn’t earned an entry on Wikipedia. It means, essentially, the area through which food travels to get from the farm to your plate. That would have been a pretty short trip a few generations ago, but in this era of globalization, our foodshed now encompasses the whole world, more or less.

This far-flung food chain has enslaved us with a false sense of abundance, turning the produce aisles of our supermarkets into a seasonless place where you can find berries and bell peppers all year round. But this apparent bounty diverts us from the fact that industrial agriculture has actually drastically reduced the diversity of the foods that our farmers grow.

As small and mid-size farms got swallowed up by the massive monoculture operations we now call “conventional,” the varieties of fruits and vegetables grown on those farms got whittled down to just those few that shipped the best and had the longest shelf life. Breeders chose to focus on species of livestock and poultry that fatten up the fastest, such as big-breasted but bland Butterball turkeys so top-heavy they can’t reproduce naturally and have to be artificially inseminated. For this we give thanks each November?

This focus on economies of scale, and the illusory “efficiency” of a food system dependent on cheap fossil fuels and perpetual subsidies, gave us, the richest nation in the world, the cheapest food. And we are all the poorer for it.

Along the way, we lost hundreds of different kinds of plants and animals; currently, “at least 1,060 food varieties unique to North America are threatened, endangered or functionally extinct in the marketplaces of the United States, Canada, and northern Mexico,” Gary Paul Nabhan writes in Renewing America’s Food Traditions, a new book that celebrates the distinctive culinary regions of our country that Agribiz almost obliterated in recent decades.

But Renewing America’s Food Traditions is not just a book; it’s an alliance: Called RAFT for short, it’s a collaborative effort from Slow Food USA and six other sustainably minded organizations. RAFT’s mission is to inspire what the folks at Slow Foods USA call “eater-based conservation” by preserving and promoting the culinary heritage and extraordinary biodiversity that blessed this country for centuries before we shifted gears and became a fast food nation.

Nabhan is participating in a Slow Food Nation forum, “Re-Localizing Food,” along with Pollan, Dan Barber and Winona LaDuke, but this powerhouse panel is, alas, already sold out, along with most of the other forums featuring the rock stars of the real food movement.

Thankfully, the Slow Food Nation folks are offering some free events and exhibits, too, including the Marketplace, which promises “to transform San Francisco’s Civic Center Plaza into an urban garden, farmers market, outdoor food bazaar and soapbox,” and the Slow Food Nation Victory Garden in front of City Hall, whose impressive array of organic heirloom vegetables is being donated to local food banks.

In keeping with its goal to promote all things sustainable, Slow Food Nation aspires to be a “zero waste event:” In addition to recycling and composting food waste, plates, flatware and packaging, Slow Food Nation is joining forces with Food and Water Watch to banish bottled water from the four-day festival. Echoing Food and Water Watch’s Take Back the Tap campaign, the event will instead offer five tap water stations where folks can refill their water bottles — or, if you didn’t bring your own, you can buy a reusable, eco-friendly stainless steel canteen.

Not content to just spare us the spectacle of 50,000 good food fanatics washing down all those sustainable snacks with bottled water, Food and Water Watch has posted a much-needed guide on its Web site for the rest of us on how to “Free Your Event From Bottled Water.” Pair this with Slow Food Nation’s Declaration for Healthy Food and Agriculture, to be unveiled on Aug. 28 at San Francisco’s City Hall, and you’ve got a virtual road map to a real revolution, even if you’re not going to San Francisco.

1 Response to Slow Food Nation : You Are What You Eat