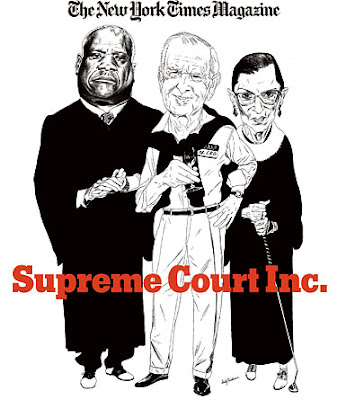 How the nation’s highest court became increasingly receptive to the arguments of American business.

[This article first appeared in the March 16, 2008 issue of The New York Times Magazine. It’s a scary read if you’re not, say, a Republican. — The Rag Blog.]

The headquarters of the U.S. Chamber of Commerce, located across from Lafayette Park in Washington, is a limestone structure that looks almost as majestic as the Supreme Court. The similarity is no coincidence: both buildings were designed by the same architect, Cass Gilbert. Lately, however, the affinities between the court and the chamber, a lavishly financed business-advocacy organization, seem to be more than just architectural.

The Supreme Court term that ended last June was, by all measures, exceptionally good for American business. The chamber’s litigation center filed briefs in 15 cases and its side won in 13 of them — the highest percentage of victories in the center’s 30-year history. The current term, which ends this summer, has also been shaping up nicely for business interests.

I visited the chamber recently to talk with Robin Conrad, who heads the litigation effort, about her recent triumphs. Conrad, an appealing, soft-spoken woman, lives with her family on a horse farm in Maryland, where she rides with a fox-chasing club called the Howard County-Iron Bridge Hounds.

Her office, playfully adorned by action figures of women like Xena the Warrior Princess and Hillary Rodham Clinton, has one of the most impressive views in Washington. “You can see the White House through the trees,” she said as we peered through a window overlooking the park. “In the old days, you could actually see people bathing in the fountain. Homeless people.”

Conrad was in an understandably cheerful mood. Though the current Supreme Court has a well-earned reputation for divisiveness, it has been surprisingly united in cases affecting business interests. Of the 30 business cases last term, 22 were decided unanimously, or with only one or two dissenting votes. Conrad said she was especially pleased that several of the most important decisions were written by liberal justices, speaking for liberal and conservative colleagues alike.

In opinions last term, Ruth Bader Ginsburg, Stephen Breyer and David Souter each went out of his or her way to question the use of lawsuits to challenge corporate wrongdoing — a strategy championed by progressive groups like Public Citizen but routinely denounced by conservatives as “regulation by litigation.”

Conrad reeled off some of her favorite moments: “Justice Ginsburg talked about how ‘private-securities fraud actions, if not adequately contained, can be employed abusively.’ Justice Breyer had a wonderful quote about how Congress was trying to ‘weed out unmeritorious securities lawsuits.’ Justice Souter talked about how the threat of litigation ‘will push cost-conscious defendants to settle.’ ”

Examples like these point to an ideological sea change on the Supreme Court. A generation ago, progressive and consumer groups petitioning the court could count on favorable majority opinions written by justices who viewed big business with skepticism — or even outright prejudice. An economic populist like William O. Douglas, the former New Deal crusader who served on the court from 1939 to 1975, once unapologetically announced that he was “ready to bend the law in favor of the environment and against the corporations.”

Today, however, there are no economic populists on the court, even on the liberal wing. And ever since John Roberts was appointed chief justice in 2005, the court has seemed only more receptive to business concerns. Forty percent of the cases the court heard last term involved business interests, up from around 30 percent in recent years. While the Rehnquist Court heard less than one antitrust decision a year, on average, between 1988 and 2003, the Roberts Court has heard seven in its first two terms — and all of them were decided in favor of the corporate defendants.

Business cases at the Supreme Court typically receive less attention than cases concerning issues like affirmative action, abortion or the death penalty. The disputes tend to be harder to follow: the legal arguments are more technical, the underlying stories less emotional. But these cases — which include shareholder suits, antitrust challenges to corporate mergers, patent disputes and efforts to reduce punitive-damage awards and prevent product-liability suits — are no less important. They involve billions of dollars, have huge consequences for the economy and can have a greater effect on people’s daily lives than the often symbolic battles of the culture wars.

In the current Supreme Court term, the justices have already blocked a liability suit against Medtronic, the manufacturer of a heart catheter, and rejected a type of shareholder suit that includes a claim against Enron. In the coming months, the court will decide whether to reduce the largest punitive-damage award in American history, which resulted from the Exxon Valdez oil spill in 1989.

What should we make of the Supreme Court’s transformation? Throughout its history, the court has tended to issue opinions, in areas from free speech to gender equality, that reflect or consolidate a social consensus. With their pro-business jurisprudence, the justices may be capturing an emerging spirit of agreement among liberal and conservative elites about the value of free markets.

Among the professional classes, many Democrats and Republicans, whatever their other disagreements, have come to share a relatively laissez-faire, technocratic vision of the economy and are suspicious of excessive regulation and reflexive efforts to vilify big business. Judges, lawyers and law professors (such as myself) drilled in cost-benefit analysis over the past three decades, are no exception. It should come as little surprise that John Roberts and Stephen Breyer, both of whom studied the economic analysis of law at Harvard, have similar instincts in business cases.

Read all of it here

This entry was posted in RagBlog and tagged Economy, Justice. Bookmark the permalink.