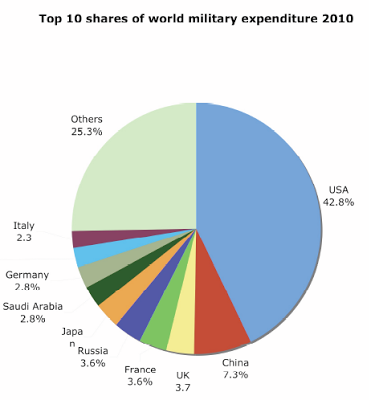 China is in second place, but its military spending only comprises about 7.3% of the world’s total military spending. The United Kingdom is third with 3.7% of the total, and Russia and France tie for fourth with 3.6% each.

No, we don’t spend that extraordinary amount just to defend ourselves (although that is the excuse the government gives and our gullible citizens have bought into). There are a couple of other reasons that are more powerful than national defense (even if no politician will admit it).

The first is the military-industrial complex. We have developed (in spite of warnings from President Eisenhower) a huge industry out of our military and supplying it with weapons (many of which are not needed and some of which don’t even work properly). But the important thing is to keep feeding taxpayer dollars into it so the war profiteers can keep making enormous profits (and some decent-paying jobs can continue for a few workers). It’s not even a matter of defense needs anymore, but of propping up the giant military-industrial complex.

The third reason is the general inability of American leaders (of both parties) to engage in effective diplomacy. This has been especially true since World War II when we have tended to carry out diplomatic missions with the ever-present threat of military power if we don’t get what we are seeking.

And finally, winning World War II and seeing democracies established in Germany and Japan has given many Americans the mistaken perception that democracy can be spread by military power. But those were anomalies, and the truth has been brought out by our misadventures in Vietnam, Iraq, and Afghanistan. Sadly, this seems to be a lesson that many politicians are incapable of learning.

The real fact is that we don’t need to spend anywhere near what we currently spend to protect this nation. It can effectively be done with far less, and the savings could be spent to balance the budget and shore up badly needed social programs (like most other developed countries do with their tax dollars). Instead of trying to force our views on the rest of the world, we should be spending our money for the betterment of our own citizens.

But that would require honesty, morality and intelligence — all things that seem to be in short supply among our politicians.