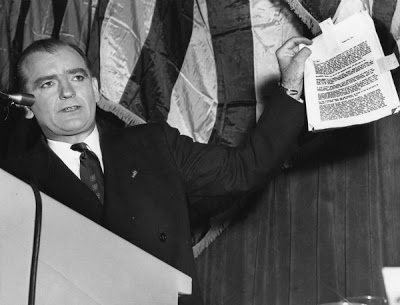 Sen. Joseph McCarthy displays one of his many reports on Communists he found in the woodwork. Photo from Wisconsin History.
What did you learn in school today?
Efforts to vindicate commie-hunting senator

See ‘Who stays and who goes? Texas Board of Education meeting in Austin,’ Below.

When we last checked in on the U.S. history textbooks standards setting process in Texas, the conservative-dominated State Board of Education was mulling one-sided requirements to teach high school students about Newt Gingrich, Phyllis Schlafly, and the Moral Majority.

Now, in the home stretch of a process that will set the state’s nationally influential standards, a liberal watchdog group is worried that the State Board of Education will try to push through changes to claim that communist-hunting Sen. Joseph McCarthy has been vindicated by history, among other right-wing pet issues.

The Republican-dominated board is meeting in Austin to vote on amendments to the current draft standards.

“The social conservative bloc is pressing for the standards to turn Joseph McCarthy into an American hero,” says Dan Quinn of the Texas Freedom Network, a group that aims to “counter the religious right.”

The conservative effort to turn public opinion in McCarthy’s favor began way back in 1954 — while the Wisconsin senator was still in office — with the publication of William F. Buckley’s McCarthy And His Enemies.

If such an amendment is proposed, Quinn expects it to come from outspoken conservative board member Don McLeroy, who has been talking up the idea. In a note to curriculum writers last fall, McLeroy encouraged them to “read the latest on McCarthy — he was basically vindicated.”

We last encountered McLeroy in September when he argued that minority groups should be thankful to the majority for granting them rights. (“For instance, the women’s right to vote. … The men passed it for the women.”)

A requirement to teach America’s “Christian or Biblical heritage” is one of the other clauses conservatives may try to get into the standards, Quinn says.

What’s at stake here is not just what Texas students learn in high school. Because the state represents one of two largest markets in the country, publishers tailor their books to the Texas standards. Those same textbooks are then sold in smaller states around the country.

The current standards draft (.pdf) has lost some of the biased requirements that had raised the ire of liberal groups. Back in October, a curriculum writing team made up of educators jettisoned the requirements that students be able to “identify significant conservative advocacy organizations and individuals,” including the Moral Majority and Gingrich. Schlafly remains on a list (see page 54) of political leaders, but she is alongside figures like Thurgood Marshall and Hillary Clinton.

But at this stage, the curriculum writing team as well as an expert review board are out of the picture. Now, the board members will have to vote on amendments proposed by their colleagues. The final vote will come in March.

It was at this same point in the ’08-’09 science textbook standards process that conservative members began to offer technical amendments about purported gaps in the fossil record, and the impossibility of natural selection, Quinn says. Members who were in favor of teaching evolution became confused in some cases about what they were voting on.

While amendments to the history standards may be easier to understand, McLeroy and the rest of the conservative bloc are at least as passionate about leaving their mark this time around.

He told the Washington Monthly (in a lengthy feature very much worth reading):

“The secular humanists may argue that we are a secular nation. But we are a Christian nation founded on Christian principles. The way I evaluate history textbooks is first I see how they cover Christianity and Israel. Then I see how they treat Ronald Reagan — he needs to get credit for saving the world from communism and for the good economy over the last 20 years because he lowered taxes.” 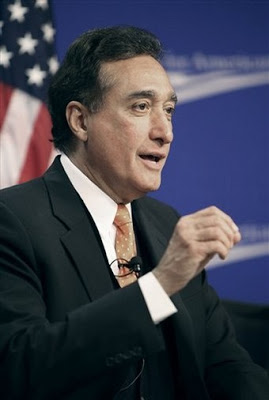 Former San Antonio mayor and HUD secretary: He’s out.
Who stays and who goes?
Texas Board of Education meeting in Austin

AUSTIN – Early efforts by social conservatives on the State Board of Education to give more emphasis to religion in the teaching of U.S. history came up short Thursday as a majority of board members opted for a more traditional approach to the subject.

Among the proposals shot down by a majority of board members was a requirement to include “religious revivals” as among the major events leading up to the American Revolution.

That proposal, offered by board member Terri Leo, R-Spring, would have called on fifth-graders to study religious revivals alongside the Boston Tea Party.

Only members of the social conservative bloc — all Republicans — supported the idea, while other Republicans and Democrats opted to stay with the recommendation of a writing team of Texas teachers and academics on the topic.

The divided vote came as the board on Thursday considered scores of amendments to proposed curriculum standards for social studies, spelling out what students should be taught in history, government, geography and other social studies classes from elementary grades through high school.

The board worked late into the night, concentrating on curriculum standards for elementary and middle schools, before adjourning. It will take up high school standards — expected to generate the most debate — today.

Much of the discussion Thursday night was over which historical figures should be covered in history classes and textbooks, as board members added several new people while deleting others who were recommended by curriculum writing teams last year.

Board critics said the three were not worthy of inclusion in the standards. Huerta was cited by one board member for her membership in the Democratic Socialists of America.

On the other hand, board members added former Texas Supreme Court Justice Raul Gonzalez, the first Hispanic elected to the high court.
[….]
Social conservatives on the board have called for the new standards to reflect the major role of religion in U.S. history, and they were expected to offer several other amendments to achieve that.

But various groups have cautioned against the board including any requirement that could jeopardize the religious freedom rights of students.

The social studies requirements will remain in place for the next decade, dictating what is taught in government, history and other social studies classes in all elementary and secondary schools.