The Earth : Love It Or Lose It, Solar Energy Dept. 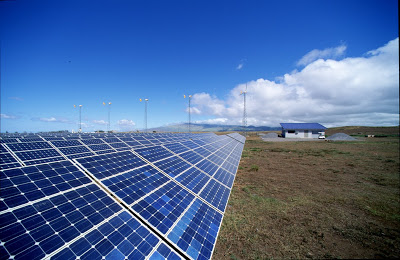 Paul Spencer is a former Austin activist and staff member of sixties/seventies underground newsppaper The Rag, who has been running for president as a way of addressing the serious issues facing our society and the world.

The nice thing about imperialism is that it motivates others to defeat it. For now, most countries are still tip-toeing around the U.S.A. because of the nuclear arsenal and due to the destabilizing effect on international economic activity of cutting off the U.S. markets. In one particular, though, the rest of the industrialized world has an anti-imperialist strategy – even Great Britain is in on this one.

Exploitation of renewable energy is the main feature of this strategy – particularly solar-derived power. Ten years ago, largely as a function of government (NASA and military) contracts, the U.S. was the world’s leading producer of photovoltaic generation devices. Now there is no U.S. manufacturer in the top 10, although there are a lot of start-ups and GE is talking a good game. The U.S. ranks third in cumulative, installed capacity; but, if it were not for tax breaks and other incentives in California and New Jersey (of all places), this country would be declining rapidly in the ranking.

Japan is now number one in installed capacity and in manufacturing output. Germany is number two. Japan has more than three times the installed capacity of the U.S. and produced five times the solar cell capacity in 2005; Germany has double the U.S. numbers in both categories. Four of the top five manufacturers in terms of rated output are Japanese, four of the top 10 are European (including the solar division of British Petroleum), one is based in Taiwan, but at the top of the list is a Chinese company that wasn’t even on the list three years ago.

Germany has rebates and incentives that cut the cost of modules roughly in half. Japan has energy (petroleum-based) prices at an unsubsidized level – the upshot is that their manufacturing output for “solar modules” is sold out for some time to come. Spain has promulgated policy to require new roofs to be constructed with photovoltaic capability. Shanghai has a similar “100,000 roofs” policy.

These are the numbers that are reported by “Western” interests. China, India and Russia all have extensive policy and capacity development projects designed to diminish reliance on hydrocarbon-based energy production. China in particular aims to become the world’s chief solar power producer and purveyor. The Chinese government instituted a policy at the beginning of 2006 that includes reducing the cost of solar modules by about 60 percent in the next six years. The Chinese intend to invest $180 billion USD (billion, not million) in photovoltaics (and wind-based-generation) over the next 14 years with a target of 80 percent (45 percent in terms of compound rate) growth in manufacturing and use per year over the next five years, as a starter. Chinese and Japanese technical papers seem now to dominate both the engineering and the scientific conferences, and Indian researchers are just getting warmed up.

One of the myths that the anti-solar (oil-supported, of course) contingent promotes is that the energy cost of solar cell production is more than the cell’s output during its operational lifetime. Research now shows between one and four years of energy payback, depending on the technology. As to cost per se, payback ranges from four to 10 years, depending on local rebates, tax credits, and other subsidies. When China succeeds in cost reduction (and the other big suppliers are forced to price compete), the payback will be two to four years – without applying the price increases for petroleum and natural gas. The lifetime of most modules is generally rated at about 20 years, but experience with actual installations is showing that this is an underestimate. Do we get the picture?

And these are just the standard, silicon-based solar cells. Interestingly, there are a large number of new developments here in the U.S., too, despite virtually no federal support for research or development. Some of the new approaches are cosmetic to some degree, such as integration with roofing material, window glass, or coatings; but, when you consider that roofs, windows, and outside walls make up a lot of single-purpose surface area, why not expand their functionality?

Much of the improvement is driven by the goal of increasing conversion efficiency. Materials such as gallium arsenide tolerate higher temperatures, which permits the use of relatively cheap light-concentration methods and materials, such as plastic Fresnel lensing. Some others, such as nitrides of gallium, indium, and copper make use of a wider spectrum of sunlight than the standard silicon material.

Much of the R&D has been done in the U.S. over the last 30-plus years in support of the space program. All of a sudden, however, the rest of the world has apparently all realized at once how they can escape the giant thumb. I don’t know if they whispered this to one another at UN cocktail parties or how this movement arose. I’m guessing, however, that the Japanese figured it out first.

Meantime, the Russians re-federalized their oil and gas industry to finance their re-engagement with science and industry; and the Chinese put together an overall strategy to exploit the U.S. retail market to raise capital, make nice with the hydrocarbon suppliers for the short-term, and develop renewable energy resources for the long-term.

I know that it’s Pollyanna-ish, but I’m still optimistic. I think that imperialism is finally being seen for the anchor that it is in the U.S. domestic sectors that tried to play along in the past. And I think that a broad segment of the world is doing something about it. The petro-sector of the U.S. ruling class appears to have overplayed its hand with its hired-hand federal government. One outcome is that the world’s oil producers figured out in a hurry that they could sell to someone else besides U.S. energy companies – even if on credit – while the U.S. was pummeling the southwest Asian tar-baby.

One practically revolutionary strategy for fundamental political change (i.e., diminishing the influence of the petroleum industry) in this country is to push for rapid alternative energy development at every level. Almost nobody will disagree with the purpose of this movement. Before long it must be allied with public power to prevent the usual co-optation, but in the short run it’s radical in its own right.