The Kernel of Solidarity Exists in Every Workplace 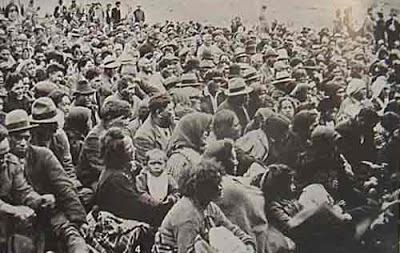 For decades, an army of pundits and academics argued that the majority of people in the United States comprised an expanding, satiated and upwardly mobile middle class–and that the very idea of a working class belonged to an industrial past long ago. The word “working class” went down the memory hole, and couldn’t be brought out–even in roundabout ways–without invoking the specter of “class war” in mainstream politics.

As University of Illinois-Chicago Professor Leon Fink wrote in the Chicago Tribune:

When Al Gore unveiled a modest appeal to “working families” at the 2000 Democratic National Convention… [h]is Republican opponent, George W. Bush, immediately counterattacked, accusing Gore of unleashing “class war” on the country. The preferred term of address had long been “middle class”; even the AFL-CIO avoided the shoals of class rhetoric to try to co-opt the conservative family-values agenda.

Yet, today, virtually every commentator, from William Kristol to Paul Krugman, unblinkingly invokes the once-dreaded terminology in suggesting that Sen. Barack Obama cannot, as the director of the Quinnipiac University Polling Institute put it, “penetrate working-class voters.”

If “working class” has become common parlance again, it may be because there is a crisis facing the working-class majority in the U.S.–those who work for wages. Hourly wages, adjusted for inflation, have fallen over the past three decades, while the size of the gross domestic product (GDP) almost tripled–a growth of riches that has accrued almost solely to big business.

But if the “working class”–and its much debated “bitterness” and grievances–is at the forefront of the 2008 presidential election, this “rediscovery” has brought along with it the reprise of longstanding myths–that the working class is, generally speaking, flag-waving, conservative, church-obsessed, tradition-oriented and mostly white.

As Fink continued in his article:

Today, “working class” has been effectively defanged of any radical, let alone subversive, intent. In fact, today’s working class looks less the modernist, rationalizing force that Marx projected than a bastion of tradition–that unmoving “sack of potatoes” he identified with the peasantry.

Whether explicit or not, today’s invocation of the working class is preceded by the word “white.” And the resulting construct–white men and women who have not gone to college–are regularly presented as a mostly conservative bloc… [T]he working class that Obama can’t reach looks to be populated by Archie Bunker and his like-minded descendants.

This is a stereotype, of course, and one with a long history. Fink invokes a distorted view of the working class–”Archie Bunker and his like-minded descendants”–that was an invention of the ruling class and mass media when it arose in the 1960s as part of an ideological counter to the growing influence of the 1960s social movements.

As International Socialist Review contributor Joe Allen has written, “In the late 1960s, the U.S. media and political establishment ‘rediscovered’ the working class, though not the real working class–which was white, Black, Latino and increasingly made up of women… The working class that they claim to have discovered was really a middle-class stereotype that portrayed the working class as white men who were in rebellion against the civil rights and antiwar movements and liberalism in general.”

Images of workers in hard hats attacking activists were broadcast to in an attempt to show that “hard-working” Americans rejected “ungrateful” and “privileged” antiwar students. But surveys in the late 1960s and early 1970s showed that manual workers opposed the Vietnam War in similar numbers to the youths who made up the student antiwar movement and the GI resistance.

This entry was posted in RagBlog and tagged American Society, Capitalism. Bookmark the permalink.