This Is Just the Beginning of Stories Like This 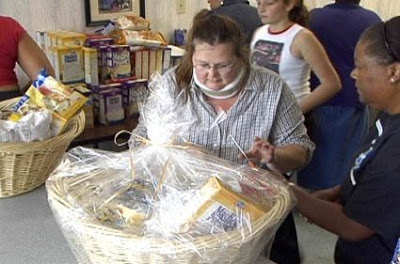 Tightening a Belt with No Notches Left
by Nicole Colson / June 14, 2008

Clip coupons. Stop eating at restaurants. Grow a vegetable garden. Learn to do without.

Everywhere you look, the mainstream media–finally waking up to the economic reality facing millions of poor and working-class Americans are suddenly full of “helpful” suggestions for those feeling the squeeze of rising food prices.

But are platitudes about how best to tighten our belts the answer?

Food inflation is at its worst in more than 17 years today, with prices having risen nearly 5 percent in the past year. The price of staple products is climbing event faster–milk and dried beans are up more than 17 percent; cheese is up 15 percent; rice and pasta 13 percent, and bread 12 percent.

With the official unemployment rate jumping by a half percentage point in May–the biggest one-month increase in 22 years–gas prices climbing to more than $4 a gallon nationally, and a growing number of families hit by skyrocketing mortgages, things are looking exceptionally bleak for many working and poor families across the U.S.

In a new USA Today poll, 54 percent of those surveyed say their standard of living is no better today than five years ago. “Fewer Americans now than at any time in the last half century believe they’re moving forward in life,” concluded a recent report by the Washington, D.C.-based Pew Research Center.

That includes their access to food. According to the U.S. Department of Agriculture, 10 percent of U.S. households today are either at risk of, or experiencing, hunger.

One bleak sign: Hormel, the company that produces the canned pork product Spam, reported a 14 percent jump in profits for the last quarter, largely because of a spike in sales of their exceedingly cheap product.

Anita Rhodes, a single mother of three living in Oakland, Md., who makes $374 every two weeks, recently told National Public Radio that she has been forced to begin shopping at a local grocery store selling expired food and damaged goods at discount prices. “The things there are all way, way past their due date, but I tried it,” Rhodes said. “The first box [of cereal] I opened had bugs in it.” She returned the box to the store to get her money–$1–back, because she couldn’t afford not to.

The family has been forced to cut out paper towels, bottled water, chips, cookies, candy and toiletries. “I don’t even look at roast right now, just because it’s so expensive. I looked at a chuck roast, and it was $15.”

According to Rhodes, if things prices continue to rise, she may be forced to take more drastic action. “I can shoot a deer,” she says. “I can do that. I can shoot a turkey. So I will feed my kids one way or another.”

And it’s not just people in rural areas who are being forced to make such choices. High school senior Brighton Early, who lives in Los Angeles, told NPR that she has gotten used to “finding flexibility” in her weekly shopping trips with her mother.

When shopping at the regular grocery store became too expensive, Early and her mother started getting their food at the local Chevron gas station–where the cashier gives them a 40 percent discount on leftover apples and bananas. As she wrote in an essay:

To ensure the best selection possible, my mother and I pile into our 20-year-old car and pull up to the food mart at 5 p.m. on the dot, ready to get our share of slightly overripe fruits.

Chevron shopping started like this: One day my mother suddenly realized that she had maxed out almost every credit card, and we needed groceries for the week. The only credit card she hadn’t maxed out was the Chevron card, and the station on Eagle Rock Boulevard has a pretty big mart attached to it…

Grocery shopping at Chevron has its drawbacks. The worst is when we have so many items that it takes the checker what seems like hours to ring up everything. A line of anxious customers forms behind us. It’s that line that hurts the most–the way they look at us. My mother never notices–or maybe she pretends not to.

I never need to be asked to help the checker bag all the items. No one wants to get out of there faster than I do. I’m embarrassed to shop there, and I’m deathly afraid of running into someone I know. I once expressed my fear of being seen shopping at Chevron to my mother, and her eyes shone with disappointment. I know that I hurt her feelings when I try to evade our weekly shopping trips.

As food prices rise, many families are being forced to ask for help in the form of government assistance and food stamps.

In some places, applications for food stamps have doubled in the last year. According to federal statistics, in March alone, some 27.9 million Americans received food stamps–up 1.5 million, or 5.7 percent, from a year earlier. Nearly half of households receiving food stamp benefits have one or more working adults.

And with food stamp benefits averaging just $1 per person per meal, many recipients who found the benefits pitifully small during the “boom” are now finding it nearly impossible to stretch what little they get.

Debby Missimi, director of food services for Family and Community Services, which offers hot meals and runs food pantries in Kent and Ravenna, Ohio, told the Akron Beacon Journal, ”When people think about the hungry, they think of a homeless person walking down the street without food. With this economy, that’s not the case. It could be your neighbor. It could be someone in your family. It could be someone who sits next to you in church. In this economy, the face of hunger has changed.”

Laura Diaz, a mother of four, whose husband works as a machinist in Chicago, got $332 in food stamps to feed her family–for the entire month of June. Her husband’s paycheck, she told NPR, goes almost entirely to pay for the family’s mortgage. And while she would like to work, without a high school diploma, she fears there’s no way she would be able to make enough to even pay for child care.

The money isn’t enough to make it through to the end of the month, so Diaz volunteers at, and receives assistance from, Casa Catalina–a neighborhood food pantry that serves more than 300 families each day.

According to America’s Second Harvest, the largest food bank in the U.S., demand across the U.S. is up 15 percent to 20 percent over last year, and many food banks are having difficulty coping. CBS News recently reported that virtually all food banks in a recent survey said demand was growing–and more than 80 percent said they were unable to meet that rising demand.

“Milk is just as much as gas prices these days,” a tearful Stephanie Smith told CBS News as she waited to pick up food with her daughter at a mobile food pantry in Dover, Tenn.–where the number of families signing up has almost doubled since October.

Smith was forced to leave her minimum wage job when her salary could no longer cover the cost of child care and her commute to work. “This is hard, to have your kids watch their parents go through this,” she added.

Unfortunately for Smith and the hundreds of others who have come to rely on the Dover food pantry, the state money that funded it is due to run out this month–and has not been renewed.

Olga Medina, who works full time providing home care for the elderly in Douglas, Ariz., told Reuters that her $1,100 monthly paycheck is no longer enough to support her, her parents and her sick child. To make ends meet, she now looks for milk, fruit and vegetables in dumpsters outside of her local supermarket each week. One day last month, she waited in line with 147 others outside the Douglas Area Food Bank for a grocery handout because she had no bread.

“We have to put up with a lot of humiliation just to survive,” she said, putting on a pair of sunglasses to hide tears. “It’s not dignified, but we are hungry, and hunger is ugly.”

This entry was posted in RagBlog and tagged American Society, Economy, Hunger. Bookmark the permalink.