Thomas Cleaver : The Republicans and Socialism for the Rich 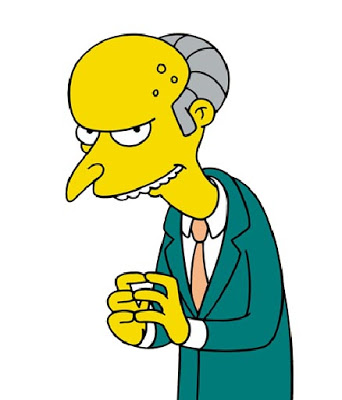 Mr. Burns, the one secretly in charge: ‘Excellent!”
Who says the Republicans don’t believe in socialism?
By Thomas Cleaver / The Rag Blog / September 17, 2008

…Or at least socialism for the rich, when their incompetence threatens to kill them all.

As Harry Truman said: “The Republican Party was, is, and always will be – of the rich, by the rich, for the rich.”

(And I bang my head against the wall at the news that three polls have McCain up by 4 points over Obama nationally after FIVE FUCKING DAYS of every one of his lies being called out by every “independent observer,” and every pundit who was “in the tank” for him realizing what a worthless piece of incompetent shit he is. Mencken was right: “Nobody ever went broke underestimating the intelligence of the American people.”)

McCain’s primary financial advisor is the guy who CREATED THE MESS – Phil Gramm (livfing proof that Ph.D. really does mean “Piled Higher and Deeper”) – the moron who overturned the Glass-Steagall Act, which would have prevented this if it was still around.

McCain’s the guy who wanted to invest Social Security in this mess, back in 1999!!!!

And he’s ahead in the polls. The mind reels.

WASHINGTON — In a bid to save financial markets and economy from further turmoil, the U.S. government agreed Tuesday to provide an $85 billion emergency loan to rescue the huge insurer AIG. The Federal Reserve said in a statement it determined that a disorderly failure of AIG could hurt the already delicate financial markets and the economy.

“The President supports the agreement announced this evening by the Federal Reserve,” said White House spokesman Tony Fratto. “These steps are taken in the interest of promoting stability in financial markets and limiting damage to the broader economy.”

Treasury Secretary Henry Paulson said the administration was working closely with the Fed, the Securities and Exchange Commission and other government regulators to “enhance the stability and orderliness of our financial markets and minimize the disruption to our economy.”

“I support the steps taken by the Federal Reserve tonight to assist AIG in continuing to meet its obligations, mitigate broader disruptions and at the same time protect taxpayers,” Paulson said in a statement.

The Fed said in return for the loan, the government will receive a 79.9 percent equity stake in AIG.

“At the administration’s request, I met this evening with Treasury Secretary Henry Paulson and Federal Reserve Chairman Ben Bernanke. They expressed the administration’s views on the deepening economic turmoil and shared with us their latest proposals regarding AIG,” Reid told reporters. “The Treasury and the Fed have promised to provide more details in the near future, which I believe must address the broader, underlying structural issues in the financial markets.”

On Tuesday, shares of the insurance company swung violently as rumors of potential deals involving the government or private parties emerged and were dashed. By late Tuesday, its shares had closed down 20 percent — and another 45 percent after hours. Still, no deal emerged.

The problems at AIG stemmed from its insurance of mortgage-backed securities and other risky debt against default. If AIG couldn’t make good on its promise to pay back soured debt, investors feared the consequences would pose a greater threat to the U.S. financial system than this week’s collapse of the investment bank Lehman Brothers.

The worries were triggered after Moody’s Investor Service and Standard and Poor’s lowered AIG’s credit ratings, forcing AIG to seek more money for collateral against its insurance contracts. Without that money, AIG would have defaulted on its obligations and the buyers of its insurance — such as banks and other financial companies — would have found themselves without protection against losses on the debt they hold.

New York-based AIG operates an insurance and financial services businesses ranging from property, casualty, auto and life insurance to annuity and investment services. Those traditional insurance operations are considered healthy and the National Association of Insurance Commissioners said “they are solvent and have the capability to pay claims.”

2 Responses to Thomas Cleaver : The Republicans and Socialism for the Rich