Gregg Barrios, a veteran of the original Rag, moderated a conversation with author Miriam Pawel at the 2014 Texas Book Festival. 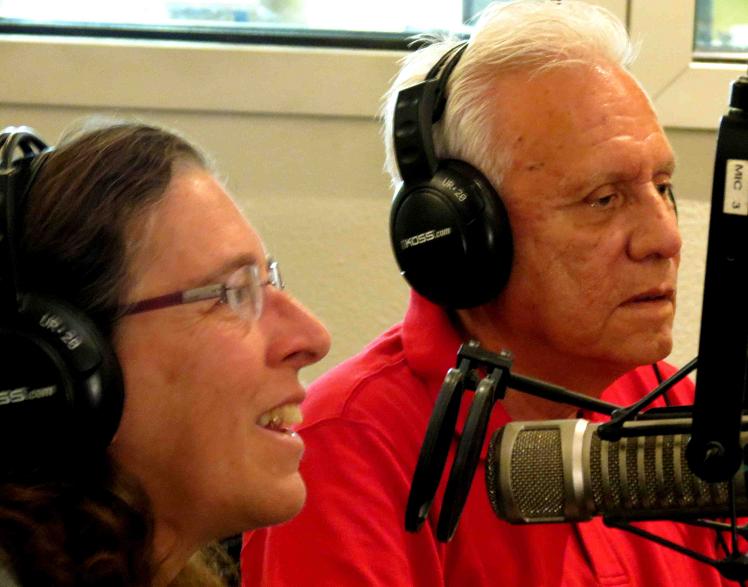 Miriam Pawel and Gregg Barrios on Rag Radio in the studios of KOOP-FM, Austin, Texas, October 24, 2014. Photos by Roger Baker / The Rag Blog.

Our guests featured on this Rag Radio podcast are Pulitzer Prize-winning journalist Miriam Pawel, author of The Crusades of Cesar Chavez, and poet, playwright, and critic — and contributor to the original Rag — Gregg Barrios.

Miriam Pawel was a featured author at the 2014 Texas Book Festival in Austin, where she appeared in conversation moderated by Barrios. On Rag Radio, we discuss Pawel’s latest book, the first biography of Cesar Chavez, the iconic founder of the United Farm Workers Union. Barrios addresses the history of the Chicano movement — with which Chavez did not identify — and reads from his collection of poetry, La Causa.

Download the podcast of our October 24, 2014 Rag Radio interview with Miriam Pawel and Gregg Barrios here — or listen to it here:

Miriam Pawel is an author, journalist, and independent historian whose previous book — The Union of Their Dreams – Power, Hope and Struggle in Cesar Chavez’s Farm Worker Movement — was a groundbreaking narrative history.

Pawel spent 25 years as an award-winning reporter who directed coverage that won Pulitzer Prizes at Newsday for the 1996 crash of TWA Flight 800 and at the Los Angeles Times for the deadly 2003 wildfires. She has been a fellow at the Alicia Patterson Foundation and a John Jacobs fellow at the Berkeley Institute of Governmental Studies and was awarded a National Endowment for the Humanities Fellowship to complete her work on the Chavez biography.

The New York Times Book Review said, “There is so much brilliant political theater in this book that it’s easy to see why Chavez is still the most celebrated Latino leader in American history,” and the New Yorker noted that Pawel “helps flesh out Chavez as more than a transcendent moral hero.”

Chavez once said, “There is a big difference between being a saint and being an angel.” On Rag Radio, Pawel tells us how Chavez, in many ways a controversial figure, nurtured his role as national icon but also left behind thousands of papers and hundreds of tapes that allowed her to present a historically rich, accurate, and textured picture of Chavez, one of the most important leaders of the 20th century.

Gregg Barrios, a San Antonio-based journalist, poet, playwright, filmmaker, and critic, is a 2013 USC Annenberg Getty Fellow and serves on the board of directors of the National Book Critics Circle. He has received a CTG-Mark Taper Fellowship, a Ford Foundation Grant, and a 2013 Artist Foundation Grant for his theater work. Most recently, Gregg has been commissioned to write a new play for the 2015 Provincetown Tennessee Williams Theater Festival and he recently made his acting debut in San Antonio.

An anti-war veteran of Vietnam, Gregg was a Chicano activist in the ’60s and an original contributor to Austin’s underground newspaper, The Rag, has contributed to The Rag Blog, its digital reincarnation, and twice before has been our guest on Rag Radio.