Tom Hayden : On the Death of Ted Kennedy 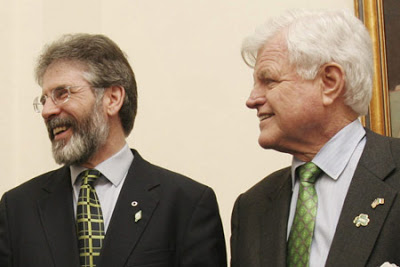 Were he alive today, the Democratic Party would be less likely to drift away from its progressive legacy in the name of victory at any price.

In his final months, he became the progressive anchor of the Barack Obama campaign. When I saw them together early in 2008, it was not easy for Ted Kennedy to oppose the party’s favorite, Hillary Clinton, on behalf of a young tribune of hope. But he did. Ted Kennedy sailed against the wind.

Were he alive today, we would have a better health care bill than anything that will emerge from this Congress. Perhaps the Senate could be shamed into voting for a bill worth of his name, but I am doubtful. Were he alive today, he surely would have counseled the president to extract our troops from Afghanistan as rapidly as possible, just as his brother Robert in 1967 decided to separate himself from his brother John’s earliest Vietnam policy. The president will miss Ted Kennedy’s wisdom amidst all the current preening and chattering in the newest ranks of the best and the brightest.

Were he alive today, Ted Kennedy would recommend diplomacy toward our apparent adversaries, just as he supported a US visa to permit Gerry Adams to enter America in search of an Irish peace. Kennedy favored the visa against the counsel of the State Department and CIA at the time.

Were he alive today, the Democratic Party would be less likely to drift away from its progressive legacy in the name of victory at any price. He was too old and experienced, had suffered through too much, to fall victim to the latest fads of the ambitious. He knew that the winds of change always return, even in the slackest tides.

I first met Ted Kennedy in 1962, when he was the kid brother, already a US senator. I hated the system of perks and privileges when most young men of my generation were facing the grim reaper of the draft. I thought his brothers were full of progressive possibility, but too imprisoned in the Democratic machine, too ambitious for technical fixes. All that began to change when they were deceived by their own CIA and Joint Chiefs at the Bay of Pigs, and again in South Vietnam, which led them to consider withdrawal from Southeast Asia and the horrifying Cold War nuclear arms race. They awakened to the spirit of the civil rights and student movements too. Then came the Dallas assassination, then the King assassination, then Bobby’s assassination here in Los Angeles.

The utter madness of it all surely contributed to Teddy’s spiral downward. The miracle was his steady recovery and his eventual restoration and extension of the Kennedy family legacy. When I last saw him, during an informal get-together in his Senate office, it was as if much of his youth, his ironic humor, his fighting spirit, and his empathy for social movements, had returned.

If we understand Ted Kennedy as the most progressive and effective member of the United States Senate, whose politics are echoed generally across the whole Kennedy family, we must draw the conclusion for our generation and the country as a whole. If either of the earlier Kennedy brothers had not been murdered, the likelihood is that American would have evolved steadily in a progressive direction, without Vietnam, without the black uprisings and repressions, without Nixon and Watergate, because that was the trajectory where Ted Kennedy believed his brothers’ legacy would be honored.

Ted Kennedy knew at the deepest level that only a new and hopeful generation of activists might lift America from the life of sorrows that he, and the rest of us, were forced to endure.

[Tom Hayden is a former state senator and leader of Sixties peace, justice and environmental movements. He currently teaches at Pitzer College in Los Angeles. His books include The Port Huron Statement [new edition], Street Wars and The Zapatista Reader.]

1 Response to Tom Hayden : On the Death of Ted Kennedy