Van Jones : What Went Wrong in the Age of Obama 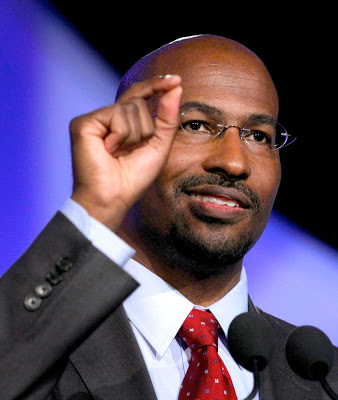 Van Jones. Photo by Bill Pugliano / Getty Images.
The Age of Obama:
What went wrong (and how to fix it)

[This article is adapted from Van Jones’ new book, Rebuild the Dream.]

The 2008 campaign was a campfire around which millions gathered. But after the election, it was nobody’s job or role to tend that campfire. The White House was focused on the minutiae of passing legislation, not on the magic of leading a movement. Obama For America did the best that it could, but the mass gatherings, the idealism, the expanded notions of American identity, the growing sense of a new national community, all of that disappeared.

It goes without saying that clear thinking and imaginative problem solving are easier in hindsight, away from the battlefield. I was in the White House for six months of 2009, and I was outside of it afterward. I had some of the above insights at the time, but many did not come to me in the middle of the drama and action. Most are the product of deeper reflection, which I was able to do only from a distance.

Nonetheless, the exercise of trying to sort out what might have been and trying to understand why nobody was able to make those things happen in real time has informed this book and shaped my arguments going forward.

I say Obama relied on the people too little, and we tried to rely on him too much.

Let me speak personally: looking back, I do not think those of us who believed in the agenda of change had to get beaten as badly as we were, after Obama was sworn in. We did not have to leave millions of once-inspired people feeling lost, deceived, and abandoned. We did not have to let our movement die down to the level that it did.

Among those who stayed active, too many of us (myself included) were in the suites when we should have been in the streets. Many “repositioned” our grassroots organizations to be “at the table” in order to “work with the administration.” Some of us (like me) took roles in the government. For a while at least, many were so enthralled with the idea of being a part of history that we forgot the courage, sacrifices, and risks that are sometimes required to make history.

That is hard, scary, and thankless work. It requires a willingness to walk with a White House when possible — and to walk boldly ahead of that same White House, when necessary. A few leaders were willing to play that role from the very beginning, but many more were not. Too many activists reverted to acting like either die-hard or disappointed fans of the president, not fighters for the people.

Once it became obvious that he was committed to bipartisanship at all costs, even if it meant chasing an opposition party that was moving further to the right every day, progressives needed to reassess our strategies, defend our own interests, and go our own way. It took us way too long to internalize this lesson — and act upon it.

The independent movement for hope and change, which had been growing since 2003, was a goose that was laying golden eggs. But the bird could not be bossed. Caging it killed it. It died around conference tables in Washington, D.C., long before the Tea Party got big enough to kick its carcass down the street.

The administration was naïve and hubristic enough to try to absorb and even direct the popular movement that had helped to elect the president. That was part of the problem. But the main problem was that the movement itself was naïve and enamored enough that it wanted to be absorbed and directed. Instead of marching on Washington, many of us longed to get marching orders from Washington. We so much wanted to be a part of something beautiful that we forgot how ugly and difficult political change can be.

Somewhere along the line, a bottom-up, largely decentralized phenomenon found itself trying to function as a subcomponent of a national party apparatus. Despite the best intentions of practically everyone involved, the whole process wound up sucking the soul out of the movement.

As a result, when the backlash came, the hope-and-changers had no independent ground on which to stand and fight back. Grassroots activists had little independent ability to challenge the White House when it was wrong and, therefore, a dwindling capacity to defend it when it was right.

We need a president who is willing to be pushed into doing the right thing, and we need independent leaders and movements that are willing to do the pushing.

The Obama administration had the wrong theory of the movement, and the movement had the wrong theory of the presidency. In America, change comes when we have two kinds of leaders, not just one. We need a president who is willing to be pushed into doing the right thing, and we need independent leaders and movements that are willing to do the pushing. For a few years, Obama’s supporters expected the president to act like a movement leader, rather than a head of state.

The confusion was understandable: As a candidate, Obama performed many of the functions of a movement leader. He gave inspiring speeches, held massive rallies, and stirred our hearts. But when he became president, he could no longer play that role.

The expectation that he would or could arose from a fundamental misreading of U.S. history. After all, as head of state, President Lyndon Johnson did not lead the civil rights movement. That was the job of independent movement leaders, such as Martin Luther King Jr., Ella Baker, Bayard Rustin, and Fannie Lou Hamer.

There were moments of conflict and cooperation between Johnson and leaders in the freedom struggle, but the alchemy of political power and people power is what resulted in the Civil Rights Acts of 1964 and the Voting Rights Act of 1965.

As head of state, Franklin Delano Roosevelt did not lead the labor movement. That was the job of independent union leaders. Again, the alchemy of political power and people power resulted in the New Deal.

As head of state, Woodrow Wilson did not lead the fight to enfranchise women. That was the role of independent movement leaders, such as suffragettes Susan B. Anthony and Ida B. Wells. The alchemy of political power and people power resulted in women’s right to vote.

As head of state, Abraham Lincoln did not lead the abolitionists. That was the job of independent movement leaders Frederick Douglass, John Brown, and Harriet Tubman. The alchemy of political power and people power resulted in the emancipation of enslaved Africans.

As head of state, Richard Nixon did not lead the environmental movement. That was the job of various environmental organizations, such as the Sierra Club, and other leaders, like those whom writer Rachel Carson inspired. Once again it was the alchemy of political power and people power that resulted in the Clean Air Act, the Clean Water Act, and the Environmental Protection Agency

The biggest reason for our frustrations and failures is that we have not yet understood that both of these are necessary — and they are distinct. We already have our head of state who arguably is willing to be pushed. We do not yet have a strong enough independent movement to do the pushing. The bulk of this book makes the case for how and why we should build one.

[Van Jones, a former adviser to President Obama and a former contributing editor to YES! Magazine, is the co-founder of Rebuild the Dream, a platform for bottom-up, people-powered innovations to help fix the U.S. economy. He is also the co-founder of the Ella Baker Center for Human Rights, Color of Change, and Green for All. This article was adapted by Jones for YES! Magazine, a national, nonprofit media organization that fuses powerful ideas with practical actions, from his new book, Rebuild the Dream. It was first published at YES! Magazine and was also published at and distributed by Progressive America Rising.]