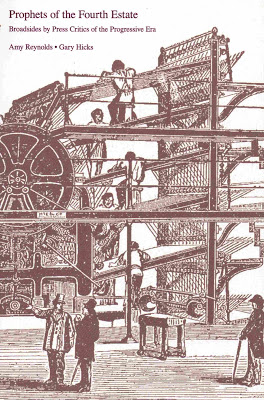 The corporate media crisis:
Everything old is new again

These days there’s one political point on which one can usually get consensus: Mainstream journalists are failing. In common parlance, most everyone “hates the media.” But there is little agreement on why journalism might be inadequate to the task of engaging the public in a democratic society. More than ever, it’s important to understand the forces that constrain good journalism.

In Prophets of the Fourth Estate: Broadsides by Press Critics of the Progressive Era, editors Amy Reynolds and Gary Hicks look back to the press criticism of the Progressive Era for help in that project. In the material they’ve collected and analyzed, we can see how the problems of a corporate-commercial media system go back more than a century.

In my foreword to the book, posted below, I try to identify some of the key limitations of the contemporary media system and emphasize the importance of this work to the project of deepening democracy.

The managers of commercial news organizations in the United States love to proclaim their independence from the corporate suits who sign their paychecks. Extolling the unbreachable “firewall” between the journalistic and the business sides of the operation, these editors and news directors wax eloquent about their ability to pursue any story without interference from the corporate front office.

“No one from corporate headquarters has ever called me to tell me what to run in my paper,” one editor (let’s call him Joe) told me proudly after hearing my critique of the overwhelmingly commercial news media system in the United States.

He rejected that, reasserting his independence from any force outside his newsroom. I countered:

“Let’s say, for the purposes of discussion, that you and I were equally capable journalists in terms of professional skills, and we were both reasonable candidates for the job of editor-in-chief that you hold. If we had both applied for the job, do you think your corporate bosses would have ever considered me for the position given my politics? Would I, for even a second, have been seen by them to be a viable candidate for the job?”

Joe’s politics are pretty conventional, well within the range of mainstream Republicans and Democrats — he supports big business and U.S. supremacy in global politics and economics. In other words, he’s a capitalist and imperialist. I am on the political left, anti-capitalist and critical of the U.S. empire. On some political issues, Joe and I would agree, but we diverge sharply on the core questions of the nature of the economy and foreign policy.

Joe pondered my question and conceded that I was right, that his bosses would never hire someone with my politics, no matter how qualified, to run one of their newspapers. The conversation trailed off, and we parted without resolving our differences.

I would like to think my critique at least got Joe to question his platitudes, but I never saw any evidence of that. In his subsequent writing and public comments that I read and heard, Joe continued to assert that a news media system dominated by for-profit corporations was the best way to produce the critical, independent journalism that citizens in a democracy needed.

After he retired from the paper, he signed on as a “senior adviser” with a high-powered lobbying/public relations firm, apparently without a sense of irony, or shame.

The collapse of mainstream journalism’s business model has given news managers less time to pontificate as they scramble to figure out how to stay afloat, but the smug, self-satisfied attitude hasn’t changed much.

As a former journalist, I certainly understood Joe’s position. When I was a working reporter and editor, I would have asserted my journalistic independence in similar fashion, a viewpoint that reflected the dominant assumptions of newsroom culture.

We saw ourselves as non-ideological and uncontrolled. We knew there were owners and bosses whose political views clearly were not radical, and we knew we worked in a larger ideological system. But we working journalists were convinced that we were not constrained.

It was not until I got some critical distance from the daily grind of journalism that I learned there were compelling analyses of the news media that questioned those assumptions I had taken for granted. That media criticism, which had taken off in the 1970s on the heels of the progressive and radical social movements of the ‘60s, was a rich source of new insights for me, first as a graduate student and later as a professor.

But that was only part of my education about the political economy of journalism. As is so often the case, I needed to look to the past to better understand the present. While I had immersed myself in contemporary criticism, I had been slow to look at history, and turning to the critiques of journalism from the progressive/populist era of the early 20th century proved fruitful.

Early critics of the commercial news media were pointing out the ways that media owners’ interest in profit undermined journalists’ desire to serve the public interest. Owners and managers are interested in news that serves the bottom line, while journalists are supposed to be pursuing news that serves democracy.

The writings collected and analyzed in this volume provide that historical context. This material is important for the ways it reminds us of a simple truth: An overwhelmingly commercial, for-profit media system based on advertising will never adequately serve citizens in a democracy.

But while history helps us recognize simple truths, it does not lead to simplistic predictions — we study history not only to identify the continuities, but also to help us understand the effects of the inevitable changes in institutions and systems.

Indeed, news media and society as a whole have changed over the century. Most obvious are the recent economic changes that have undermined the business model of commercial media. Newspapers and broadcast television stations were wildly profitable through the 20th century, which subsidized an annoying cockiness on the part of owners, managers, and working journalists.

Competition from digital media has wiped that smug smile off the face of mainstream journalism, leaving everyone scrambling to come up with a new model. But to focus only on the recent economic crisis would be to miss other trends in the past century that are at least as important.

Reporters who were once members of the working class have become quasi-professionals, and that professionalization of journalism has had effects both positive (elevating ethical standards) and negative (institutionalizing illusory claims to neutrality).

Too often journalists in the second half of the 20th century acted as part of the power structure rather than critics of it, as reporters and editors increasingly identified with the powerful people and institutions they were covering rather than being true adversaries.

In the 21st century, the idea of professional journalism — whatever its problems and limitations — is under assault from a pseudo-journalism driven by right-wing ideology. The assertion that the problem with media is that they are too liberal is attractive to many ordinary people who feel alienated from a centrist/liberal elite, which appears unconcerned with their plight. But the right-wing populism offered up by conservatives obscures the way in which elites from that perspective are equally unconcerned with the struggles of most citizens.

Some of us are tempted to applaud the erosion of the model of professional journalism we find inadequate for democracy, but a more politicized model for journalism likely will follow the right-wing propaganda that has dominated in the United States in recent decades.

Does history offer insights as we struggle to create a more democratic news media? My reading of the past century leaves me focused on two points.

First, we have to be clear about what we mean by “democracy.” The elites in the United States prefer a managerial conception of democracy based on the idea that in a complex society, ordinary people can participate most effectively by choosing between competing groups of political managers.

A participatory conception understands democracy as a system in which ordinary people have meaningful ways to participate in the formation of public policy, not just in the selection of elites to rule them.

Second, we must recognize that expansions of individual freedom do not automatically translate into a deepening of democracy. Though legal guarantees of freedom of expression and political association are more developed today, there is less vibrant grassroots political organizing compared with the United States of the late 19th and early 20th centuries.

In other writing I have referred to this as the “more freedom/ less democracy” paradox, and it is central to understanding the perilous political situation we face. (See Citizens of the Empire: The Struggle to Claim Our Humanity [San Francisco: City Lights Books, 2004], Chapter 4, “More Freedom, Less Democracy: American Political Culture in the Twentieth Century,” pp. 55–76.)

The lesson I take away: Real democracy means real participation, which comes not from voting in elections or posting on blogs, but from a lifelong commitment to challenging power from the bottom up.

Concentrated wealth has adapted, becoming more sophisticated in its use of propaganda and skillful in its manipulation of the political process.

Journalism’s claim to a special role in democracy is based on an assertion of independence. The corporate/commercial model puts limits on journalists’ ability to follow crucial stories and critique systems and structures of power. Flinging the doors open to a more ideological journalism in a society dominated by well-funded right-wing forces will not create the space for truly independent journalism that challenges power.

The simple truth is that a more democratic media requires a more democratic culture and economy. The media critics in this volume articulated that idea in the context of their time. We need to continue that tradition.

[Robert Jensen is a journalism professor at the University of Texas at Austin, where he teaches courses in media law, ethics, and politics — and a board member of the Third Coast Activist Resource Center in Austin. His books include All My Bones Shake: Seeking a Progressive Path to the Prophetic Voice, and Getting Off: Pornography and the End of Masculinity. His writing is published extensively in mainstream and alternative media. This article was first published at Truthout. Robert Jensen can be reached at rjensen@uts.cc.utexas.edu. Read more articles by Robert Jensen on The Rag Blog.]