Varieties of State Capitalism : China’s Plan to Kickstart its Economy 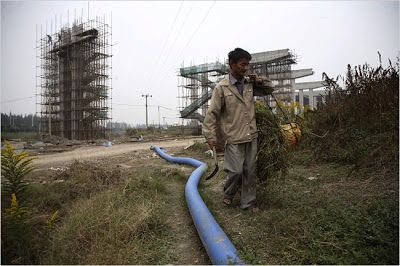 An elevated highway site near Hangzhou, the sort of project that would be financed in a new economic stimulus package. Photo by Qilai Shen / European Pressphoto Agency.
‘China has a more efficient kind of state-nourished capitalism; they can mandate that the government spend a lot on intelligent infrastructure.’
By Roger Baker / The Rag Blog / November 11, 2008

Both the United States and China have state capitalism wherein the governments try to nourish the capitalist sector to keep it expanding fast enough to pay off all its economic obligations/debts with interest.

China has a somewhat different and more efficient kind of state-nourished capitalism; they can mandate that the government (the fiscal sector) spend a lot on intelligent infrastructure, but we have a much more contentious process.

Our government is propping up capitalism by bailing out the investment banking sector that made all the risky bets on eternal high growth, assuming some of the excess cash will trickle out into the rest of the economy. We have a deeply imbedded habit over a long period of using treasury debt to finance consumer stuff from China; we have a bank-based economy and they have our transplanted industrial economy.

A visionary and progressive industrial policy is apparently beyond the understanding and abilities of the US political system as currently configured. Over decades we have gotten financially clogged arteries, a bad staff infection of lobbyists who run Washington, and a hollowed out economy based with its remaining industry largely based on auto-addiction to cheap oil.

To be brief, almost all industrial economies from Sweden to Brazil have some variety of mixed system, de facto state capitalism; almost no countries without a taxing government sector or without a market sector at the opposite end.

But in the US, the capitalist class has gradually hijacked the government to siphon off all the money on behalf of ruling class interests. The economist Mancur Olson died before he could get a Nobel Prize in economics for writing penetratingly about this universal tendency toward the expansion of bureaucracy in government over time.

SHANGHAI — China announced a huge economic stimulus plan on Sunday aimed at bolstering its weakening economy, a sweeping move that could also help fight the effects of the global slowdown.

At a time when major infrastructure projects are being put off around the world, China said it would spend an estimated $586 billion over the next two years — roughly 7 percent of its gross domestic product each year — to construct new railways, subways and airports and to rebuild communities devastated by an earthquake in the southwest in May.

The package, announced Sunday evening by the State Council, or cabinet, is the largest economic stimulus effort ever undertaken by the Chinese government.

“Over the past two months, the global financial crisis has been intensifying daily,” the State Council said in a statement. “In expanding investment, we must be fast and heavy-handed.”

The plan was unveiled as finance ministers from the Group of 20 nations met in São Paulo, Brazil, over the weekend.

It came less than a week before President Hu Jintao was scheduled to travel to Washington for a global economic summit meeting hosted by President Bush.

On Saturday, Mr. Hu spoke by telephone with President-elect Barack Obama about a variety of issues, including the global financial crisis and how their countries might cooperate to help resolve economic problems.

Asian markets welcomed news of the stimulus plan. The Japanese Nikkei index rose 5.6 percent in trading early Monday. Stocks in Hong Kong and Shanghai rallied strongly, jumping over 5 percent and lifting share prices that have been depressed for much of the year.

Although Beijing has indicated that it will focus on keeping its own economy on track, it is difficult to insulate any economy from a global downturn. After five years of growth in excess of 10 percent, China’s economy is beginning to weaken. Growth in exports and investment is slowing, consumer confidence is waning and stock and property markets are severely depressed.

The stimulus plan, though driven by domestic concerns, represents a fresh commitment by China to keep from adding to the economic and financial woes of the United States and Europe. It is also likely to cheer foreign investors in China’s economy by ensuring that the country remains a source of growth.

China’s package is not comparable to fiscal stimulus measures that are being discussed in Washington. In China, much of the capital for infrastructure improvements comes not from central and local governments but from state banks and state-owned companies that are encouraged to expand more rapidly.

The plan also differs from the $700 billion financial rescue package approved by Congress, which has helped strengthen bank balance sheets but did not directly mandate new lending or support specific investment projects in the United States.

China’s overall government spending remains relatively low as a percentage of economic output compared with the United States and Europe. Yet Beijing maintains far more control over investment trends than Washington does, so it has greater flexibility to increase investment to counter a sharp downturn.

It was unclear how Chinese officials arrived at the $586 billion figure or how much of the stimulus would be spending above what Beijing normally earmarks for infrastructure projects. Beijing said it was loosening credit and encouraging state-owned banks to lend as part of a more “proactive fiscal policy.”

The government said the stimulus would cover 10 areas, including low-income housing, electricity, water, rural infrastructure and projects aimed at environmental protection and technological innovation — all of which could incite consumer spending and bolster the economy. The State Council said the new spending would begin immediately, with $18 billion scheduled for the last quarter of this year.

State-driven investment projects of this kind have been a major impetus to Chinese growth throughout the 30 years of market-oriented reforms, a strong legacy of central planning.

The biggest players in many major Chinese industries — like steel, automobiles and energy — are state-owned companies, and government officials locally and nationally have a hand in deciding how much bank lending is steered to those sectors.

The investment numbers announced by China’s central government often include projects financed by a variety of sources, including state-backed entities and even foreign investors.

Beijing is struggling to cope with rapidly slowing economic growth. A downturn in investment and exports has led to factory closings in southern China, resulting in mass layoffs and even setting off sporadic protests by workers who have complained that owners disappeared without paying them their wages.

With many economists in China now projecting that growth in the fourth quarter of this year could be as low as 5.8 percent, and amid worries that the country’s economy could be walloped by the global financial crisis, Beijing is moving aggressively.

Analysts were expecting China to announce a big stimulus package, but they said they were surprised at its size. “That is much more aggressive than I expected,” said Frank Gong, an economist at J. P. Morgan who is based in Hong Kong. “That’s a lot of money to spend.”

Mr. Gong said that after the Asian financial crisis in 1997, Beijing undertook a similar, but much smaller, stimulus package, earmarking huge sums to build the country’s highway and toll-road system, projects that helped keep the economy growing.

Arthur Kroeber, managing director at Dragonomics, a Beijing-based economic research firm, said the government was concerned because people in China had suddenly pulled back on spending as a precautionary move because of worries about China’s suffering with the global economy.

“The government is sending a signal saying: ‘We’re going to spend in a big way,’ ” Mr. Kroeber said Sunday in a telephone interview. “This is designed to say to the market that people should not panic.”

1 Response to Varieties of State Capitalism : China’s Plan to Kickstart its Economy