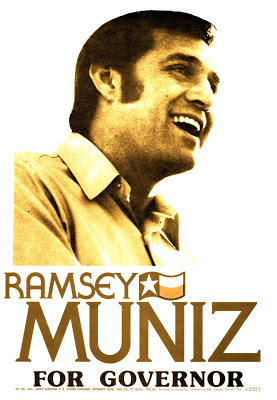 When all is said and done
when you and I are dead,
your legend will remain
a true Chicano son.

It never was just us
it was you, me y todos
who believed our time
had come – and it had.

But politics is a fickle
whore who knocks on
every door for a quick
trip around the whirl.

You were the poster
boy for el movimiento
madres y palomilla all
voted La Raza Unida.

Ramsey for Governor
de Tejas was the rally
and the cry until they
put a spell on you.

We stood in disbelief
the gutless cynics
said you betrayed us
by not fighting back.

But where were we
when you received
a life sentence for
drug-trafficking?

No solidarity or support
from those whose road
you paved, now elected
judges, mayors y mas.

Watching them on TV,
I wonder how and why
they lost their raza roots,
cut their native tongue.

A century later, you
occupy the same cell
at Leavenworth for a life
sentence of confinement.

We don’t know how to
honor our leaders alive
only after they’re dead
and buried en el olvido.

I saw a documentary on
PBS today a clip of your
vibrant face did express
real strength and grace.

Your voice had been erased
as if truth could cause riots
or upheaval in the realization
of how much we left undone.

When all is said and done
when you and I are dead,
your legend will remain
a true Chicano son. 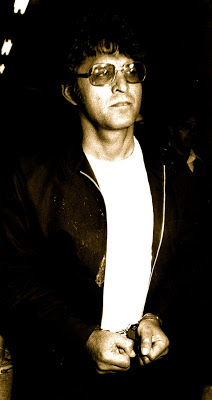 Ramsey Muniz arrives at Nueces County Jail in handcuffs, December 28, 1976.
Ramsey Muniz was a Chicano activist, a civil rights attorney, and twice the Raza Unida Party candidate for governor of Texas, receiving six percent of the vote in 1972. Famed attorney Dick DeGuerin said Muniz “changed the face of politics in Texas. He gave power of inclusion to Hispanic Americans.” Muniz was convicted in 1976 on drug charges resulting from a controversial sting operation carried out by the DEA, and in 1994 was given life without parole after a third drug conviction.

[San Antonio poet, playwright, and journalist Gregg Barrios wrote for The Rag in Sixties Austin. Gregg is on the board of directors of the National Book Critics Circle. His new book of poetry, in which this poem is included, is La Causa (Hansen, 2010).]