What Did Bush Tell Gonzales? It Ain’t Pretty… 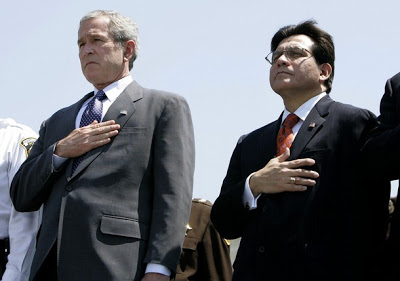 Bush and Gonzales: Who told whom to do what and when? Photo by Joshua Roberts-Pool / Getty Images.

Sources say Alberto Gonzales now claims that President Bush personally directed him to John Ashcroft’s hospital room in the infamous wiretap renewal incident—and that in another instance the President asked him to fabricate fictitious notes.

In March 2004, White House Counsel Alberto Gonzales made a now-famous late-night visit to the hospital room of Attorney General John Ashcroft, seeking to get Ashcroft to sign a certification stating that the Bush administration’s warrantless wiretapping program was legal. According to people familiar with statements recently made by Gonzales to federal investigators, Gonzales is now saying that George Bush personally directed him to make that hospital visit.

The hospital visit is already central to many contemporaneous historical accounts of the Bush presidency. At the time of the visit, Ashcroft had been in intensive care for six days, was heavily medicated, and was recovering from emergency surgery to remove his gall bladder. Deputy Attorney General James B. Comey has said that he believes that Gonzales and White House Chief of Staff Andrew Card, who accompanied Gonzales to Ashcroft’s hospital room, were trying to take advantage of Ashcroft’s grievously ill state—pressing him to sign the certification possibly without even comprehending what he was doing—and in the process authorize a government surveillance program which both Ashcroft and the Justice Department had concluded was of questionable legality.

Gonzales has also told Justice Department investigators that President Bush played a more central and active role than was previously known in devising a strategy to have Congress enable the continuation of the surveillance program when questions about its legality were raised by the Justice Department, as well as devising other ways to circumvent the Justice Department’s legal concerns about the program, according to people who have read Gonzales’s interviews with investigators. The White House declined to comment for this story. An attorney for Gonzales, George J. Terwilliger III, himself a former deputy attorney general, declined to comment as well.

Although this president is famously known for rarely becoming immersed in the details—even on the issues he cares the most about—Gonzales has painted a picture of Bush as being very much involved when it came to his administration’s surveillance program.

In describing Bush as having pressed him to engage in some of the more controversial actions regarding the warrantless surveillance program, Gonzales and his legal team are apparently attempting to lessen his own legal jeopardy. The Justice Department’s inspector general (IG) is investigating whether Gonzales lied to Congress when he was questioned under oath about the surveillance program. And the Justice Department’s Office of Professional Responsibility (OPR) is separately investigating whether Gonzales and other Justice Department attorneys acted within the law in authorizing and overseeing the surveillance program. Neither the IG nor OPR can bring criminal charges, but if, during the course of their own investigations, they believe they have uncovered evidence of a possible crime, they can seek to make a criminal referral to those who can.

In portraying President Bush as directly involved in making some of the more controversial decisions about his administration’s surveillance program, Gonzales may, intentionally or unintentionally, be drawing greater legal scrutiny to the actions of President Bush and other White House officials. And what began as investigations narrowly focused on Gonzales’s conduct could easily morph into broader investigations leading into the White House, and possibly leading to the appointment of a special prosecutor.

Dan Richman, a former federal prosecutor in Manhattan and professor at Columbia Law School, told me that Gonzales appears to be attempting to walk the thin line of taking himself out of harm’s way while at the same time protecting the president, a strategy that very well could work: “I think he is serving his own purposes and the White House’s purposes,” Richman says.

According to Richman, by invoking Bush’s name and authority, Gonzales and his legal team are making it more difficult for investigators to seek a criminal investigation of his actions, or for other investigators to later bring criminal charges against him: “The clearer it is that Gonzales did what he did at the behest of the president of the United States, the safer that he [Gonzales] is legally,” says Richman. At the same time, by saying that he is advising the president, Gonzales also makes it easier for those at the White House to claim executive privilege if they do indeed become embroiled in the probe.

Moreover, according to one senior Justice Department official, Gonzales, his legal team, and the White House also know that Justice’s IG and OPR are unlikely to press senior White House officials, let alone the president, to answer their questions.

But this legal strategy could also backfire.

One scenario feared by the White House is that the IG or OPR could send a public report to Congress concluding that Gonzales or some other official may have committed a crime. At a minimum, that would make the conduct of Gonzales, or of any other official deemed to be under suspicion, the subject of a criminal investigation.

1 Response to What Did Bush Tell Gonzales? It Ain’t Pretty…