When Will This Man Stand Trial? 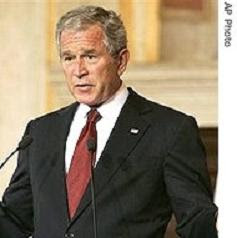 Now here’s a surprise – Junior is contemptuous of the Supremes’ decision to uphold habeas corpus. In his own words, “It’s just a god damned piece of paper.”

As Juan Cole points out, this 5-4 Supreme Court ruling mimics the one that brought Junior to the White House in 2000.

ROME — U.S. President George Bush says he disagrees with a Supreme Court ruling that prisoners at the Guantanamo Bay detention facility have the right to challenge their detention before civilian judges. VOA’s Paula Wolfson reports Mr. Bush spoke out on the high court ruling while in Rome for talks with Italian Prime Minister Silvio Berlusconi.

While the president was meeting with Italian leaders, the U.S. Supreme Court handed down its latest ruling on Guantanamo.

The president said he disagrees. “We will abide by the court’s decision. That doesn’t mean I have to agree with it.”

Speaking at a joint news conference with Prime Minister Berlusconi, Mr. Bush said the White House will study the narrow 5-4 court opinion to see if new legislation is needed.

“It was a deeply divided court. And I strongly agree with those who dissented,” he said.

The status of the prisoners at the military facility at Guantanamo Bay has been a source of friction between the United States and Europe.

Throughout his European tour, Mr. Bush has been urging European leaders to look beyond such differences and work with the United States on global issues, such as the diverse challenges found in the Middle East.

During their talks in Rome, Prime Minister Berlusconi said once again that Italy wants to be included in the group of countries working to convince Iran to suspend uranium enrichment.

The five permanent members of the U.N. Security Council and Germany are already involved in the initiative. President Bush said in Rome he will consider the Italian request. But White House National Security Adviser Stephen Hadley says Italy, which is one of Iran’s biggest trading partners, might not make a good addition to the negotiating team.

“Italy has a very robust set of commercial relations with Iran. This is always a problem for countries when their commercial ties sometimes seem to be at variance with their national security requirements,” he said.

During his appearance with President Bush, Prime Minister Berlusconi dismissed that notion, saying those commercial ties are an asset.

“Our offer [to join the negotiations] is based on the fact we know Iran very well from the inside, we have some leading companies that are in these countries [this country] and therefore we think this would be very useful,” he said.

Mr. Bush’s official welcome in Rome was warm. But the reception was very different in the streets of the Italian capital where the president is very unpopular, mainly because of the Iraq war.

Security is extremely tight for his visit, with thousands of extra policemen deployed throughout the city.

Demonstrators greeted the president when he arrived in Rome Wednesday, and there were protest banners hanging across the street from a hillside villa where he held a morning meeting with Italian entrepreneurs.

The president will meet with Pope Benedict at the Vatican on Friday before heading on to Paris, London and Belfast – the last stop on his so called “farewell tour” of Europe.