There’s Just Something Wrong About Profit on Water 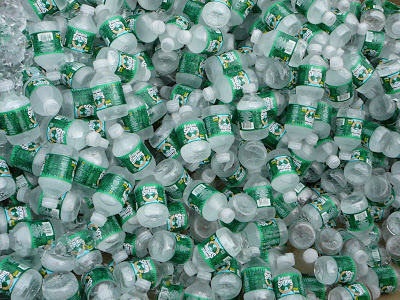 To paraphrase an old axiom: You don’t buy water, you only rent it. So why did Americans spend nearly $11 billion on bottled water in 2006, when we could have guzzled tap water at up to about one ten-thousandth the cost? The facile answer is marketing, marketing and more marketing, but Elizabeth Royte goes much deeper into the drink in “Bottlemania: How Water Went on Sale and Why We Bought It,” streaming trends cultural, economic, political and hydrological into an engaging investigation of an unexpectedly murky substance. Partway through her undoctrinaire book, Royte, a lifelong fan of tap water, refills her old plastic water bottle, reflecting that “what once seemed so simple and natural, a drink of water, is neither. All my preconceptions about this most basic of beverages have been queered.” And by the end of the book she will have discarded the old plastic bottle too, but not the tap.

“Bottlemania” is an easy-to-swallow survey of the subject from verdant springs in the Maine woods to tap water treatment plants in Kansas City; from the grand specter of worldwide water wars, to the microscopic crustaceans called copepods, whose presence in New York’s tap water inspired a debate by Talmudic scholars about whether the critters violated dietary laws, and whether filtering water on the Sabbath constituted work. (Verdict: no and no.) Water is a topic that lends itself to tour-de-force treatment (the book “Cadillac Desert” and the movie “Chinatown” come to mind), as well as righteous indictments and dire predictions (“Thirst: Fighting the Corporate Theft of Our Water,” “When the Rivers Run Dry: Water — The Defining Crisis of the Twenty-First Century”). Where others are bold, “Bottlemania” is subversive, and after you read it you will sip warily from your water bottle (whether purchased or tap, plastic or not), as freaked out by your own role in today’s insidious water wars as by Royte’s recommended ecologically responsible drink: “Toilet to tap.”

BOTTLEMANIA: How Water Went on Sale and Why We Bought It.
By Elizabeth Royte.
248 pp. Bloomsbury. $24.99.
Related
Op-Ed Contributor: A Fountain on Every Corner (May 23, 2008)
The ‘Bottlemania’ Web Site

Eww. Sorry. Let’s talk about those evil marketers. In 1987, Americans drank only 5.7 gallons of bottled water per person per year, but the cumulative impact of ad campaigns and the vision of Madonna fellating a bottle of Evian in “Truth or Dare” more than doubled consumption by 1997. In 2000 the chief executive of Quaker Oats bragged to analysts that “the biggest enemy is tap water.” By 2005, the enemy had become the consumer’s bladder; and in 2006, Pepsi, which owns Aquafina, spent $20 million suggesting that Americans “drink more water.” That year we drank 27.6 gallons each at a rate of about a billion bottles a week.

But marketing swings both ways. As quickly as bottled water became a symbol of healthy hyperindividualism — sort of an iPod for your kidneys — a backlash turned it into the devil’s drink. In 2006, the National Coalition of American Nuns came out against bottled water for the moral reason that life’s essential resource should not be privatized. New numbers surfaced: each year the bottles themselves require 17 million barrels of oil to manufacture, and, one expert tells Royte, “the total energy required for every bottle’s production, transport and disposal is equivalent, on average, to filling that bottle a quarter of the way with oil.” Mayors from San Francisco to New York suddenly became aware of the new symbolism of bottled water as a waste of taxpayer money, a diss of local tap water and a threat to the environment. Some canceled their city’s bottled water contracts. Chicago began taxing the stuff. And celebrities — among them Matt Damon and … Madonna — started backing a dazzling array of water charities in support of domestic tap and African water supplies, associating themselves with the magical ur-brand of “pure water” just as marketers and Madonna did in the early ’90s.

Royte asks, perceptively, if the pro-bottle and anti-bottle movements aren’t cut from the same plastic: “Is it fashion or is it a rising awareness of the bottle’s environmental toll that’s driving the backlash? I’m starting to think they’re the same thing.” To Royte, the author of “Garbage Land,” righteousness requires a greater commitment.

She finds it in Fryeburg, Me., a town of 3,000 that is trying to stop Nestlé’s Poland Spring from sucking 168 million gallons of water a year out of the pristine aquifer buried under its piney woods. As Royte arrives the town is in an uproar, with neighbor pitted against neighbor and rumors of secret planning-board meetings and of dummy corporations. Fryeburg is a “perfect example of water’s shift from a public good to an economic force,” she observes. The locals are more blunt: “This is what a water war looks like.” Fryeburg bears the burden of living at the other end of the giant green Poland Spring pipe. Residents of nearby Hiram count 92 water tankers rolling through their town in one typical 24-hour period; they feel themselves under siege precisely because their watershed is clean, while 40 percent of the country’s rivers and streams are too polluted for swimming or fishing, let alone drinking. Fryeburg residents try to repel the water company. They demand tests, throw a Boston Tea Party by dumping Poland Spring in a local pond, take the issue to Maine’s Supreme Judicial Court and hold a town meeting straight out of Norman Rockwell. Here I wish Royte had devoted more energy to the narrative. The people of Fryeburg and their complaints feel tentative — a sketch where a portrait could have been. And although her writing always flows, I sometimes wished for something less utilitarian.

That comes, unexpectedly, as Royte stands at the edge of the Ashokan Reservoir in upstate New York. “Ignoring the bluish mountains that form its backdrop and the phalanx of security guards in our foreground,” she gazes “down onto the spillway which curves and drops like a wedding cake, in four tiers, before sending its excess through a granite passage,” supplying 1.2 billion gallons a day through 300 miles of tunnels and aqueducts and 6,200 miles of distribution mains. There once was grandeur in public works, and Royte captures the mythic heroism that inspired the politicians and engineers to build great reservoirs more than a century ago. Their outsize civic largesse makes our current culture of single-serving bottles feel decidedly crummy. But returning to public water’s golden age, if it’s possible, will not come cheap. Royte says the country needs to invest $390 billion in our failing water infrastructure by 2020.

By the time I finished “Bottlemania” I thought twice about drinking any water. Among the risks: arsenic, gasoline additives, 82 different pharmaceuticals, fertilizer runoff sufficient to raise nitrate levels so that Iowa communities issue “blue baby” alerts. And in 42 states, Royte notes, “people drink tap water that contains at least 10 different pollutants on the same day.” The privatization of pristine water is part of a larger story, a tragic failure to steward our shared destiny. And if you think buying water will protect you, Royte points out that it too is loosely regulated. And there is more — the dangers of pipes and of plastic bottles, the hazards of filters, and yes, that “toilet to tap” issue. But there is slim comfort: Royte says we don’t really need to drink eight glasses of water a day. Drink when you’re thirsty, an expert says. That’s refreshing.

Lisa Margonelli is an Irvine fellow at the New America Foundation and the author of “Oil on the Brain: Petroleum’s Long Strange Trip to Your Tank.”

This entry was posted in RagBlog and tagged Capitalism, Ecology, Economy. Bookmark the permalink.