2008 : Bush Blew it on Katrina, But Where Were the Progressives? 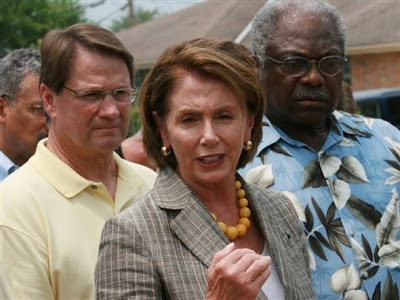 Speaker Nancy Pelosi in Chalmette, La., Aug. 14, 2007. Pelosi and a congressional delegation of Democrats were visiting Hurricane Katrina ravaged areas. With her are House Majority Whip James E. Clyburn, D-S.C. (right) and U.S. Rep. Charlie Melancon, D-La. Photo by Dave Martin / AP.
‘On one of the biggest human rights tragedies within our own borders — a hurricane which devastated an area the size of Great Britain, killed 1,800 people and uprooted a million residents — progressives had little to offer.’
By Chris Kromm / December 30, 2008

What was it that finally turned public sentiment against President Bush and the Republicans after their post-9/11 rise in popularity? Not the Iraq war or Abu Ghraib, issues which rightfully became focal points for progressive opposition. According to Bush’s own aides, it was Washington’s failed response to the tragedy of Hurricane Katrina

That’s the finding of “An Oral History of the Bush White House” by Cullen Murphy and Todd Purdum in Vanity Fair. Featuring interviews with people close to Bush about key moments in his presidency, the consensus among Bush’s friends and critics alike is that Katrina marked the unraveling point of Bush’s presidency and Republican dominance. A couple choice quotes:

Dan Bartlett, White House communications director and later counselor to the president: Politically, it was the final nail in the coffin.

What’s shocking is how little progressives and Democrats understood this. In the months after Katrina, progressives were rightfully pouring into the streets to protest the Iraq war, and blogs and book writers were churning out millions of pages on human rights crimes like CIA torture flights and Abu Ghraib.

But on one of the biggest human rights tragedies within our own borders — a hurricane which devastated an area the size of Great Britain, killed 1,800 people and uprooted a million residents — progressives had little to offer.

Democratic leader Rep. Nancy Pelosi didn’t make it to the Gulf Coast until six months after Katrina hit. I was in New Orleans when she came, preparing the first of several Institute reports trying to bring national attention to the ongoing crisis in the Gulf. Pelosi told the TV cameras she was “shocked” at the devastation she saw. Locals just rolled their eyes — Pelosi only underscored how out of touch Congressional Democrats were with what was happening in the Gulf Coast.

Each time our team went to interview residents in New Orleans and coastal Mississippi, we got the same questions: Why aren’t they doing anything in Washington? Where’s the outrage? Where’s the legislation? Has the country forgotten about us?

The strange thing is that the country hadn’t forgotten about Katrina. Millions of people — especially faith groups — cared deeply and took action, committing time and money to deliver supplies, rebuild houses and help those in need. There was a massive constituency across the country ready to be mobilized around the cause of Gulf Coast recovery.

But progressives dropped the ball. Even after Democrats recaptured Congress in 2006 — more the result of Katrina than anything done by Howard Dean and Rahm Emanuel — there was little movement on rebuilding New Orleans’ ramshackle levees or addressing the crisis of affordable housing.

There was no shortage of good ideas: In spring 2007, we released an entire report on concrete policy propsals coming from Gulf Coast leaders on how to jump-start the failing recovery. But aside from a few token pieces of legislation, none were honestly pursued.

The results of that failure of progressive leadership are with us today. Thousands of Gulf families are still struggling and displaced. Affordable housing is scarce. Hundreds of miles of Louisiana coast is still being destroyed by industrial activity, removing a critical natural defense against future storms.

Katrina wasn’t just the turning point for Bush and Republicans. It also marked a failure of Democratic and progressive leadership — with deadly consequences.

2 Responses to 2008 : Bush Blew it on Katrina, But Where Were the Progressives?