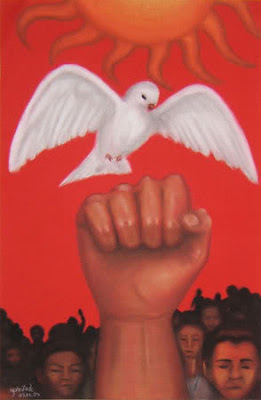 With a new year around the corner, let’s look at the year now ending, and then the year ahead.

The year 2009 began with great hopes by many Americans with liberal, progressive or left views. Republican George W. Bush and his neoconservative clique were finally gone after eight dreadful years of right wing governance at home and rampant imperialism abroad.

Many people with hopes for substantial change thought that despite the recession important political and social progress would accompany the new Democratic administration led by President Barack Obama and a Democratic Congress with large majorities in the House and Senate.

Many hoped for an end to the unjust wars, militarism and ever increasing war budgets; the replacement of economic teams that favored the wealthy, the banks and Wall Street; a reversal of the growing gap between rich and poor and the disproportionate economic inequality experienced by African Americans, Latinos, and Native Americans; implementation of adequate measures to mitigate foreclosures and create jobs for the swelling ranks of the unemployed; a halt to erosions of civil liberties; no more cover-ups of the Bush Administration’s war crimes; and serious advances on climate change.

Now, as we are about to enter 2010, many of the high hopes entertained last January have been dashed. President Obama, with his political caution and penchant for compromising with the right wing, hasn’t lived up to his advance billing. The Democratic Congress has terribly few accomplishments to its credit because of the large number of Blue Dogs and other conservatives in its own ranks, determined to undermine progressive legislation.

We understood from the beginning that the optimistic talk about the new administration governing from the center/center-left or even from dead center was political daydreaming. Much of what is emanating today from the White House and Congress isn’t even from the center but the center-right. This was not the change many people believed in and voted for.

So what about 2010? There will be more of the same unless the liberals, the progressives and the left — and there are many millions of us in America — begin to make a lot of noise. We need democracy in action to bring about social change — and that comes first from the people, not the politicians.

Nothing beats mass movements in motion for pushing political parameters toward the left, after decades of having them moved toward the right. There are scores of people’s movements, independent of the ruling parties, that need more people behind them in order to make an impact on the political system.

We think every liberal, progressive and leftist who is disappointed with the way things are going should join up with one or another of the mass movements and left organizations in 2010 and push for real change — for peace, or climate change, or single-payer/public option, or protection of civil liberties, or economic justice, or a score or so of additional categories where the power of the people can make a real difference.

That’s our wish for the new year — a wish for many more people and movements in motion for progressive social change. Happy new year, friends. 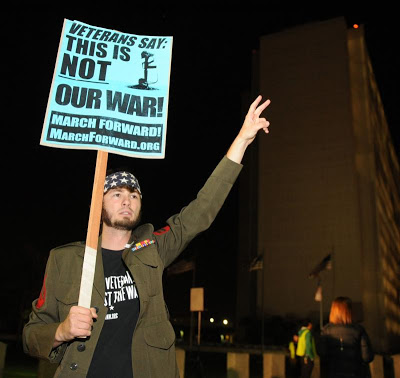 Iraq veteran Ryan Endicott protests against the escalation of the War in Afghanistan in Los Angeles December 2, 2009. Photo by Jim Ruyman / UPI.

The widening war, economic recession, and serious policy disappointments from the White House and Congress are negative developments, but this situation also creates opportunities for the growth of progressive oppositional movements.

True, the political life of the country remains enveloped in a choking fog of conservatism emanating from the right-to-center “consensus” of the two ruling parties. The positive aspect of this situation is that social movements are growing in America, and are demanding fairly substantive change — not the vague “change” articulated by centrist politicians during last year’s elections.

We speak largely of the new citizen’s movement for single-payer/public option healthcare reform, and the regenerated people’s environmental movement demanding significant progress in countering climate change, though each has a way to go organizationally, politically and in demonstrating they have staying power.

These movements are specifically challenging the inadequate, half-way measures emanating from the White House and Congress in response to the demand for severe reductions in greenhouse gas emissions and for building a healthcare system that finally puts people before profits. Working in concert with existing health-related and environmental movements, these newer forces have the potential to transform into energetic mass movements. 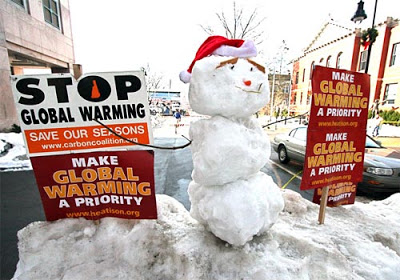 Photo by Casey Bisson / All American Patriots.
Obviously, given the Obama Administration’s continuation of America’s aggressive military posture, its glorification of the military, and an international perspective based upon extending Washington’s hegemony wherever possible, the antiwar movement is of exceptional importance.

All three of these large movements are articulating demands that go beyond what the present powers in Washington will accept, much less the neoconservative yahoos of the previous administration. And they are joined by other grassroots organizations growing around such pressing needs as jobs and foreclosures, financial regulation and progressive immigration reform, to name a few.

These movements will be strengthened by the gradual shedding of political illusions by millions of progressives and liberals who assumed the Obama Administration would pursue a center-left reformist agenda. A process of political awakening is gradually taking place.

We think the progressive healthcare and climate change movements have the potential for real growth because their goals — public healthcare for all, and the survival of our planet — are irrefutably essential for the well being of society. As it becomes evident that Washington disdains their demands, participants will learn valuable lessons that advance their political consciousness — namely, that insurance companies rule the healthcare debate, big business controls the climate change agenda, and many American politicians are in liege to corporate and financial interests.

The antiwar movement has experienced hard times in the last couple of years, largely because the movement’s main constituency by far — Democratic voters — began drifting away when their party gained Congress in the 2006 elections. This process accelerated when Obama was elected last year. A majority of Democrats told opinion polls they opposed the Afghan adventure, but now that it’s Obama’s war a great many have not yet returned to the peace movement.

But this is changing, not least because of Obama’s decision to significantly escalate the Afghan war.

We think the antiwar movement is going to bounce back, especially as the Obama Administration increases the violence and the financial costs in Afghanistan while expanding the war into Pakistan. The protests set for the seventh anniversary of the Iraq war on March 20 in Washington, San Francisco, Los Angeles, Chicago and other cities will help determine the movement’s future.

A stronger antiwar movement, combined with growing movements for healthcare, climate change and, hopefully a movement dedicated to the welfare of the working people of our country, can become an important factor in American politics. The combination of several movements in action for different progressive objectives is quite powerful. We had that during the 1960s and early 1970s, and it produced many important reforms — so many, in fact, that a conservative backlash against them still reverberates today. 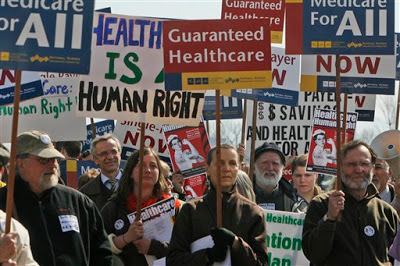 Photo from Cinie’s World.
This struggle between right and left views has been brewing for a long time, but it is growing more intense now that the Republicans are out of power and increasingly tilting to the far right. Who’s going to prevail? Will it be the right/far right, with its reactionary anti-government populism, religious-right social/cultural views and neoconservative imperialism? The nation got a taste of some of this during the summer at the town hall confrontations. Will it be the vacillating center now in power, the first instinct of which is to compromise with the right? Or the center-left and left with their people-first policies and far more rational international views?

Influencing this outcome are the very progressives and liberals who played an important role in electing Obama because they thought he’d govern from the center-left. Many now are distressed because their candidate is actually doing so from the center-right — a major political difference. What will they do now?

At the same time the needs of the majority of American people have been coldly ignored by both ruling parties for 40 years, and this majority is today experiencing the most extreme ravages of the current recession. These people are situated in the working class, the lower to mid-sector of the middle class, the poverty caste, and the African American, Latino and Native American minorities who suffer cruelly disproportionate hardships.

The political duopoly has done nothing of significance to improve the lot of the masses of people in the years before and during the Great Recession, and it will do nothing when the economic crisis is declared over in a year or two. Both left and right are contending to provide leadership for this marginalized majority of the American people. So what is to be done?

We need big social, political and economic reforms in America that will attend to the needs of working families. We certainly need solid healthcare and climate change policies. And we need to end these endless wars — almost seven years in Iraq and over eight years in Afghanistan. And much more.

This can only happen if the center-left and left are stronger. Clearly, their clout within the two-party system is negligible. Progressive power, and the power of the American people, today resides in the social and activist and alternative political movements for progressive change, most certainly including the peace movement.

One way of becoming stronger is for the progressives and liberals who are dismayed by the shortcomings of the Congress and president they elected to join in these center-left social movements and fight hard for social change from an activist — as opposed to an almost entirely electoral — orientation. This will simultaneously put pressure for change on the Obama government, stand in strong opposition to the active right wing, and build for a progressive future.

[Jack A. Smith was editor of the Guardian — for decades the nation’s preeminent leftist newsweekly — that closed shop in 1992. Smith now edits the Hudson Valley Activist Newsletter, where a version of this article also appears.]