Some ‘Renaissance’ : Big Win for ‘No Nukes’ 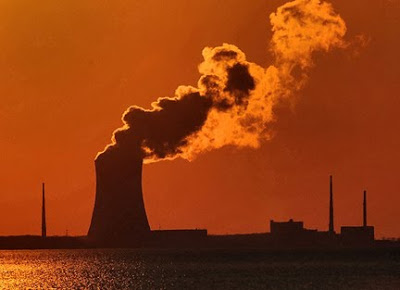 Nine Mile Point nuclear facilities in Oswago, New York, near the shore of Lake Ontario, at sunset . A new facility, to be built by UniStar, has been delayed. Photo by Mike Greenlar / The Post-Standard.
Success for grassroots movement:
Nuclear power biz suffers another big blow

Throughout the U.S., while the corporate media hypes a ‘renaissance’ of new nukes, facts on the ground say the opposite is happening.

In the wake of Copenhagen, an unheralded but hard-fought “No Nukes” victory has moved us closer to a green-powered Earth.

It has happened in upstate New York, where the UniStar Nuclear Energy front group asked the Nuclear Regulatory Commission to delay its application to build a reactor at Oswego, near Syracuse.

Meanwhile, in Texas, the San Antonio city council’s deliberations over building two new reactors have disintegrated into recriminations, resignations, and firings over a multi-billion-dollar price jump in projected cost estimates, a furor that could doom reactor construction there as well. And in Vermont, Entergy has threatened to shut its Yankee reactor if the legislature does not approve a complex maneuver that would allow its owners to escape certain financial liabilities.

Throughout the U.S., while the corporate media hypes a “renaissance” of new nukes, facts on the ground say the opposite is happening. The longer that trend continues, the more likely we are to win a world powered by the Solartopian technologies that really work, including wind, solar, geothermal, sustainable bio-fuels, increased efficiency/conservation, and more.

The Oswego postponement stems from the successful national grassroots campaign sparked by NukeFree.org and others dating to late 2007. When the Bush Administration asked for $50 billion in loan guarantees to build new reactors, a well coordinated campaign rose up, complete with a music video from Bonnie Raitt, Jackson Browne, Graham Nash, K’eb Mo and Ben Harper.

With help from key Congressional Democrats, a wide range of organizations and individuals rallied to get the $50 billion package out of proposed energy legislation. Grassroots opposition has since beaten the proposed guarantees two more times.

It is as yet unclear what new reactor funding will come from Washington in the near future. There is still an $18.5 billion loan guarantee fund left over from the Bush era. But the Department of Energy has run into serious political and procedural problems in administering the money. It may soon announce one or more new reactor projects designated to get the money, possibly including one in Georgia, where ratepayers have been put on the line to underwrite construction even if the plant never opens.

Republican proposals for virtually unlimited future loan guarantees are now being targeted for a Climate Bill and other legislation that may or may not make it through Congress in the coming months. Sen. John McCain (R-AZ) and other industry supporters are pushing hard for major federal financing. The Obama Administration has made some pro-nuclear rumblings, but remains elusive in terms of firm commitments.

Because the reactor industry cannot get private financing for new reactors, all the pro-nuke rhetoric in the world will mean nothing without federal subsidies. After 50 years, the industry doesn’t have Wall Street’s backing. Nor can it get private liability insurance in case of a major disaster. And it still lacks a solution for its radioactive waste problem.

Most critically of all, the longer new construction is delayed the less competitive the industry becomes. Cost estimates are literally all over the map, with $7-9 billion for a 1000 megawatt reactor being current used as a benchmark. But even that is not expected to last.

The Oswego project involves a design financed by the French government. This latest setback indicates even they may not be as bullish on reactors as the hype would indicate. As Michael Mariotte of the Nuclear Information and Resource Service puts it, “Unistar’s postponement is just another indicator that new reactors will not be built unless American taxpayers are forced to take the financial risk.”

Thus as the dust settles from the failures in Copenhagen, the U.S. might look to the conference’s host country. In the 1970s a powerful Green movement stopped the Danes from going nuclear. Instead, as even the New York Times’s pro-nuclear Thomas Friedman has recently acknowledged, Denmark successfully focused on wind power. Today the wind industry is one of Denmark’s top employers, and is a major source of both clean green energy and significant financial profit.

Throughout the world, the cost of renewables is plummeting while reactor prices soar. So if America’s thus-far successful grassroots campaign against massive federal loan guarantees and other nuclear bailouts can continue, we just might find ourselves on a parallel path to a green-powered Earth.

[Harvey Wasserman’s Solartopia! Our Green-Powered Earth is at www.harveywasserman.com , as is Harvey Wasserman’s History of the United States. Wasserman is senior advisor to Greenpeace U.S., and senior editor of www.freepress.org]