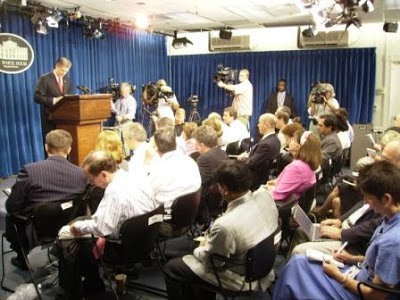 Political operatives love to talk about circumventing the media and other co-called “elites” — i.e., independent specialists, observers and thinkers. The operatives convince themselves they can take their candidate’s message directly to the people — on their terms, without all that poking and prodding and skepticism. That’s propaganda. In a democratic society, it rarely works for long.

If only that were true. But if there’s one indisputable lesson from the last eight years, it’s that political propaganda works exceedingly well — not despite an aggressively adversarial press but precisely because we don’t have one. Carney’s idealistic claims about the short life-span of propaganda in American democracy are empirically false:

“Half of Americans now say Iraq had weapons of mass destruction when the United States invaded the country in 2003 — up from 36 percent last year, a Harris poll finds” (Washington Times, 7/24/2006); “Nearing the second anniversary of the Sept. 11, 2001, terrorist attacks, seven in 10 Americans continue to believe that Iraq’s Saddam Hussein had a role in the attacks” (Washington Post, 9/6/2003); “The same poll in June showed that 56% of all Republicans said they thought Saddam was involved with the 9/11 attacks. In the latest poll that number actually climbs, to 62%” (USA Today/Gallup poll, 10/6/2004); “The latest Harris Poll has some interesting results on public opinions of Saddam Hussein’s possible links to al Qaeda. Of those Americans polled, 64% agree that Saddam Hussein had ‘strong’ links to al Qaeda” (Harris poll, July 21, 2006); “49 percent of Americans think the president has the authority to suspend the Constitution . . . Only a third of Americans understood that much of the rest of the world opposed our invasion [of Iraq]. Another third thought the rest of the world was cheering our invasion, and a third thought the rest of the world was neutral” (Rick Shenkman, June, 2008).

Of course Carney is right in theory that anyone running for Vice President ought to submit to questioning from the media. But the idea that her doing so will be some great blow against propaganda is wrong for numerous reasons. Who are these great, aggressive journalists who are going to question her in a meaningfully adversarial way in order to expose the falsehoods behind the image that is being created around her?

When they decide in a couple of weeks that Palin is ready to do so, she’ll go and sit down with Brit Hume or Larry King or Charlie Gibson or some other pleasant, accommodating person who plays a journalist on TV and have a nice, amiable, entertaining chat about topics that are easily anticipated. Having been preceded by all sorts of campaign drama about her first interview and the excitement that she’s not up to the task, her TV appearance will be widely touted, score big ratings, and will be nice entertainment for the network that presents it. It will achieve many things. Undermining propaganda isn’t one of them.

This idea that she’s some sort of fragile, know-nothing amateur who is going to quiver and collapse when subjected to the rough and tumble world of American journalism is painfully ludicrous, given that — as the Canonization of the endlessly malleable Tim Russert demonstrated — that imagery is a fantasy journalists maintain about themselves but it hardly exists. The standard journalistic model of “balance” means that the TV journalist asks a few questions, lets the interviewee answer, and then moves on without commenting on or pointing out false claims, i.e., without exposing propaganda (Carney can check his own magazine to see how that sad, propaganda-boosting process works — here, here, and here). Few things are easier than submitting to those sorts of televised rituals.

Moreover, Sarah Palin isn’t Dan Quayle. She is extremely smart — much smarter than the average media star who will eventually be interviewing her — and she is very politically skilled as well. She didn’t go from obscure small-town city council member to Governor to Vice Presidential nominee by accident. She’ll be more than adequately prepared for the shallow, 30-second, rote exchanges that pass for political interviews in our Serious mainstream discourse. Anyone expecting her to fall on her face or be exposed as some drooling simpleton is going to be extremely disappointed. That might (or might not) happen with real questioning, but she’s not going to face that.

If anything, this growing drama about Palin’s supposed fear of facing America’s super-tough “journalists” who are chomping at the bit to expose her is going to help her greatly, for exactly the reason Digby wrote here, after highlighting Chris Matthews’ complaints that Palin won’t yet submit to interviews:

As if submitting to Chris Matthews’ questions ever told voters anything meaningful about the candidates.

They are going to work themselves into a frenzy over this. And the right will hold Palin off just long enough for the outcry to become deafening. And then Palin will appear in front of a gargantuan television audience (again) on something like 60 Minutes — and do quite well. They are already working the media hard to make sure they don’t go for the jugular — and they won’t.

People need to get over the idea that Palin’s some kind of Britney Spears bimbo. She’s a professional politician and from the looks of it, a pretty good one. She’s not going to fall on her face on TV. They will build the expectations accordingly.

Carney is exactly wrong. Propaganda thrives — predominates — in our democracy for many reasons, the principal reason being that we don’t have the sort of journalist class devoted to exposing it. Anyone who wants to contest that should examine the empirical data above, or more convincingly, just look at what the Bush administration has easily gotten away with over the last eight years — the systematic deceit, the radicalism, the corruption, the crimes.

The ideological extremism and growing ethical questions that define Sarah Palin — and especially the discredited, rejected core beliefs of John McCain — means that the McCain campaign should have much to worry about in this election. Having Sarah Palin face the mighty, scary American press corps certainly isn’t one of them. That’s just a melodramatic distraction, one that will redound to the GOP’s benefit. Palin will “face” our media soon enough, and it will probably be the easiest thing she’ll have to do between now and November.

UPDATE: Several people in comments suggest/hope that Palin’s refusal to submit to press questioning will alienate journalists and make them more intent on investigating her and subjecting her claims to scrutiny. A healthy journalistic instinct would indeed produce that reaction. But is that what we have?

It isn’t just that the Bush administration has been the most secretive in modern history (though it has been), but Dick Cheney seemed to take sadistic pleasure in purposely concealing from reporters even the most innocuous information, just to show he could. He even refused to say how many people worked in his office, or who worked there, or even where he was and what he was doing on any given day. Did that propel journalists to investigate him more aggressively or subject his claims to greater investigative scrutiny? Yes, that is a rhetorical question. A properly functioning press corps would become more adversarial and aggressive when treated with such contempt by the GOP. Ours becomes more browbeaten, more passive, more eager to please.

UPDATE II: From the AP, an hour or so ago:

Palin, the surprise pick of Republican presidential nominee John McCain, has been giving campaign speeches alongside the Arizona senator since the GOP convention but has not sat down for an interview about her views.

A McCain-Palin adviser says an interview was offered to ABC’s Charlie Gibson several days ago and that they expect it to happen in the latter part of the week in Alaska.

It’s not prescience when you simply describe the bleeding obvious. If I were a McCain adviser and wanted to have Palin sit with someone who is perceived as a “journalist” while knowing that no damage could possibly occur, I’d pick Charlie Gibson, too. There are many, many other equally good alternatives, but when it comes to wretched passivity and sycophantic establishment worship, the former “Good Morning America” host — whose career was built on oozing amiability and inoffensiveness — is as good as it gets.

This entry was posted in RagBlog and tagged Journalism, Propaganda, The Press. Bookmark the permalink.