Created by distinguished scribe Paul Abbott, the series is intelligent, exciting, and well-paced. 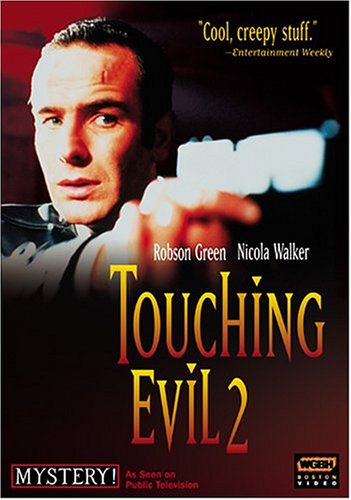 The Original British version of Touching Evil aired 16 episodes from 1997-1999, eight of which are available on Netflix. It won three awards (including two TV Quick Best Actors for star Robson Green) and 10 nominations (including three BAFTAs and an Edgar). More than 92.4% of viewers rating it at imdb.com gave it thumbs up, and 28.2% rated it a perfect 10. All demos like it, but it was most popular with females 30-44.

Creator and writer of 12 episodes was highly regarded Paul Abbott, who has enjoyed15 award wins and 17 noms, including six BAFTA noms and two wins for Cracker and Clocking Off.) Abbott won the distinguished American Edgar award for the terrific original British version of State of Play and also took home an Emmy for the marvelous TV film The Girl in the Café.

Robson Green won three British awards for Best Actor and Most Popular Actor and got four other noms (including four for Most Popular Actor) for eight different TV series, including the sensational Wire in the Blood. Nicola Walker appeared in 36 British series and films, including Four Weddings and a Funeral and the outstanding spy series MI-5.

Touching Evil was very popular in the UK and U.S. and also aired in Sweden, Finland, Japan, Switzerland, and France.

In season one, Creegan suffers a gunshot wound but gains a sixth sense in this dark serial drama. Relying on this gift, he and his partner go after some of Britain’s biggest baddies. In the second season, Dave and Susan bring the city’s biggest crooks to justice in cases involving rape, murder, and the sale of children. In the third and final series, the unit is hot on the trail of a serial killer who removes the hearts from his targets and a murderer who burns his victims alive.

In 2004, the USA Network screened a 12-episode American adaptation of the British serial, produced by actor Bruce Willis’s production company, and starring Jeffrey Donovan (Burn Notice) as detective Creegan and Vera Farmiga (Oscar nom for Up in the Air, 11 awards and 27 more noms for works including the fine mob film The Departed).

The premise of the U.S. version was somewhat different than that of the UK series. Rather than acquiring the ability to sense criminals, Creegan’s recovery from a gunshot wound to the head instead removed his impulse control and sense of shame. While the American adaptation garnered critical acclaim, the USA Network did not renew it.

I had trouble finding an episode of the original series for you on YouTube, but here’s one from the U.S. version   which I also watched and found pretty good.