An adorable cast creates a West Auckland criminal family struggling to go straight after its leader is imprisoned. 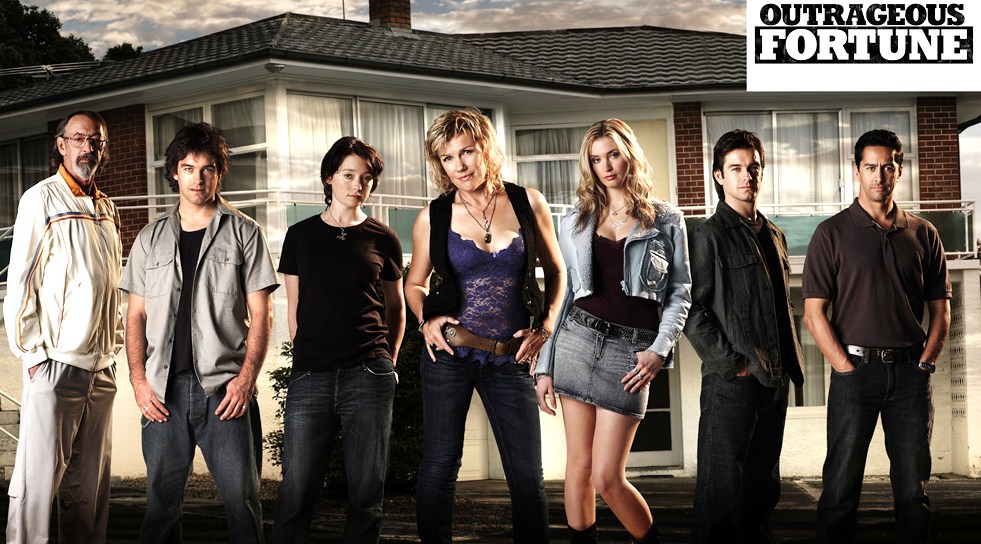 I am currently watching (on Netflix Instant streaming) and thoroughly enjoying the fourth of six seasons of the lively New Zealand criminal family comedy-drama Outrageous Fortune. It is a guilty pleasure I have become addicted to. Airing 107 episodes from 2005-2010, it is the longest-running drama series made in New Zealand.

The series follows the lives of the notorious West family, headed by Cheryl (Robyn Malcolm) and Wolf (Grant Bowler) in their middle class West Auckland home. The family relies on crime for an income, with Cheryl working at a stolen goods shop, grandpa a safecracker, and the others involved in illegalities of various kinds.

When Wolf is incarcerated, Cheryl tells her family, Van (Antony Starr), Jethro (Antony Starr), Pascalle (Siobhan Marshall), Loretta (Antonia Prebble) and Ted (Frank Whitten) that they will obey the law from now on.

Show co-creator Rachel Lang described the series as an “upside down morality tale and a family story about a woman who tries to make her family go straight.”

All six seasons are on Netflix and Netflix instant streaming. Here’s the pilot episode.

More than 93% of the 1,122 viewers rating it at imdb.com gave this series thumbs up, and an astonishing 56% rated it a perfect 10! It was big with all demos but better with women (rating it 9 out of 10) than with men (8.2). Over six seasons, ratings more than doubled. The finale was the most popular NZ TV show by a wide margin, with 700,000 viewers (in a tiny country).

Watching Outrageous Fortune, you quickly and easily learn lots of colorful Kiwi slang. For instance, “pash” means “kiss,” to “dob” means “to inform on” and “root” means “fuck,” either as a verb, noun, or adjective (“she is very rootable”). One of many things I like about this series is that Anglos, Maoris, and Samoans (called “coconuts” by racist characters) happily coexist in the story.

Clan leader Cheryl is initially disillusioned by her attempts at earning a legal living, but she and a couple of her gal friends start a business called “Hoochie Mama” making and selling sexy underwear. Teenage Loretta pays a homeless girl to attend school for her while she runs a video story and plans a film director career. 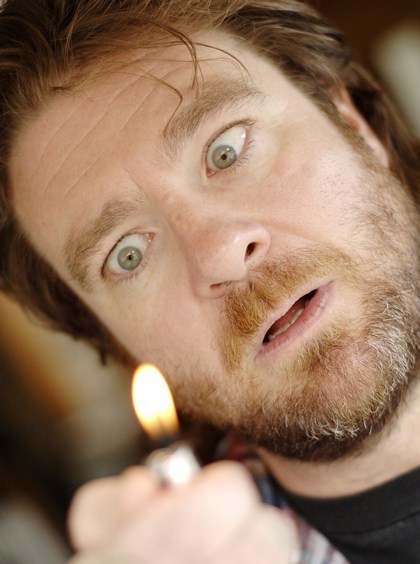 John Leigh as Sparky the arsonist.

The plot is consistently twisty, dramatic, and often funny. The cast is great, and has many wonderful characters, including the deranged electrician/firebug “Sparky” and Van’s best pal Munter.

The series earned high critical acclaim and won 30 major categories in the New Zealand television awards. They include five wins for Best TV show, eight for best drama, five for best script, and three for best director. Almost all the actors were honored.

The series was created by Rachel Lang (who wrote 53 episodes and 13 other series) and James Griffin (who penned 50 episodes, 16 other series, and the films Possum Hunter and The Chosen).

Most of the delightful cast are unknown on this side of the Pacific, but Malcom was in Rake, Top of the Lake, and Lord of the Rings) and Starr appeared in The World’s Fastest Indian and Xena: Warrior Princess.

One viewer wrote: “The acting is brilliant with a ‘who’s who’ of Kiwi actors (Robyn Malcolm, Frank Whitten) and also some great newcomers (Siobhan Marshall, Antony Starr). This show lets Kiwis laugh at themselves, so it’s something that we can all relate to. It includes such things as a funeral party BBQ with heavy drinking.”

Versions of the series have been produced in the United Kingdom and United States. The UK remake, Honest, ran for a single season in 2008. The U.S. remake, Scoundrels, aired in 2010 for eight episodes, to mixed reviews. A previous adaptation, entitled Good Behavior, failed to be picked up for broadcast by any networks.