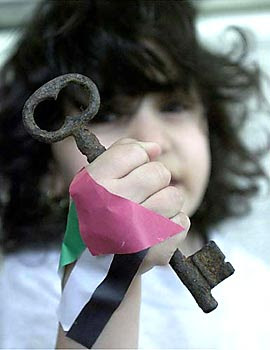 The Palestinian symbol of the right of return. Many Palestinians still have the keys to their former homes in lands from which they were expelled.
The Problem is Statelessness
By Juan Cole / May 11, 2009

King Abdullah II of Jordan revealed to the Times of London that the Obama administration may attempt a comprehensive peace treaty between Israel and the entire Muslim world. The latter would recognize Israel and grant El Al overflight rights. Israel in return would have to freeze settlement activity and move smartly toward a two-state solution and the establishment of a Palestinian state, with Israeli settlers removed from the West Bank. The status of Jerusalem would be left for later negotiations.

Abdullah warned that if rapid progress is not made, another war will probably break out in the region within 18 months to two years.

In my view, the central problems in the Israeli-Palestinian conflict are the statelessness of the Palestinians in the Occupied Territories and in their diaspora, the continued military occupation or blockade by the Israelis, and the rapid expansion of Israeli colonies, which are usurping Palestinian land and rights.

Until the statelessness of the Palestinians is understood and seen as the central problem that it is, there can be no real progress on the issues. Statelessness was an attribute of slaves in premodern times. The Jews of Europe in the 1930s and 1940s were the primary victims of the crime of stripping people of their citizenship in a state. It is monstrous that Palestinians should be stateless all these decades after 1948. Make no mistake; it is Israel that deprived them of statehood, which the 1939 British White Paper pledged to them, and which other League of Nations Mandates, such as French Syria and Lebanon and British Iraq, achieved.

A stateless person ultimately has no rights, since it is states that guarantee rights. A stateless person may be robbed, raped, and sometimes even killed with impunity. Stateless children are often deprived of schooling. Since the property of the stateless is ambiguous with regard to its legal status, the stateless are at risk for extreme poverty. The contemporary world is a world of states, and falling between the cracks because you lack citizenship in any state is a guarantee of marginality and oppression.

Apologists try to shift the blame for Palestinian statelessness from Israel to someone else. But it won’t work. The original tort of derailing Palestinian independence was Israel’s, and Israel has been the main force preventing the declaration of a Palestinian state, so it is Israel that must step up here. Other countries cannot be expected to solve a problem created by the Israelis, nor do most of the countries in the region havethe economic efflorescence or governmental stability to do so.

It seems obvious what needs to be done to end Palestinian statelessness. If a Palestinian state isn’t created in short order, the world is in for decades of Apartheid and political decay and consequent trouble, including terrorism and further wars. At the end of this process likely Israel will be forced to absorb the Palestinians as its own citizens, i.e. you end up with a one-state solution. The reason that there is more talk about the latter now is that it does at least resolve the central problem, of Palestinian statelessness, a problem that cannot be solved in any other way once a Palestinian state is forestalled by the massive Israeli colonization of the West Bank. (Actually I should say “Israeli and American,” since a third of the Israeli squatters in the West Bank are Americans).

If Obama really is making this push for a comprehensive settlement, it is an enormous undertaking and its success is by no means assured (to say the least). He will have to be tough with Netanyahu and Lieberman, who will try to sabotage any such move. At least, the Obama administration is demonstrating some independence, and is no longer doing extensive advance briefings for Israeli officials on US diplomacy in the region.