American Indians and the CIA : Buying Silence With Advertising 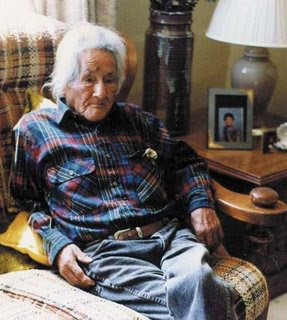 Hopi elder Dan Evehema, sitting on a couch at his home on the Hopi mesa in 1996, warned: “Don’t take grant funding, they will control you.”
How advertisers like the CIA and FBI use dollars to control and silence people.
By Brenda Norrell

In case you noticed the alarming, large advertisements by the CIA Clandestine Services on the front web page of a national American Indian newspaper this week, or the ad by the FBI as one of the main sponsors of the National Congress of American Indians annual convention [Oct. 19-24] in Phoenix, it is good to remember how advertisers and funders control the media and organizations.

First, for newspapers, there is the outpouring of dollars for large ad spaces in prime sites. For Indian organizations, there is financial backing for events or programs.

When the newspaper, or Indian organization, does something the funder doesn’t like, they often threaten to halt the advertising dollars. “We can’t go along with that,” they say, or “We can’t support you if you do this …”

If it means losing a large sum of money, the publisher or Indian organization is likely to concede to the demands. This may mean refusing to publish an article, firing a staff member, dropping a columnist or speaker, or halting the spread of certain ideas and issues. This is one reason that the media in the United States is heavily censored now, as advertising dollars dry up and sales decline.

Sometimes, the funder doesn’t have to say anything, by accepting the dollars, compliance is bought and sold.

Along the US/Mexico border, the threat of the loss of US dollars in appropriations often means that elected Native American officials will not voice the truth about Homeland Security and the construction of the US border wall. The issues of Indian sovereignty, desecration of burial places and the violation of federal environmental laws are silenced.

During NCAI’s convention in Phoenix in October, will those border issues be presented? Will the truth be told about the worldwide carbon scam, which offers fictional carbon credits to enrich the World Bank?

Will the assassinations of Indigenous Peoples by mining corporations in the Americas be exposed, or the diseases resulting from mining, power plants, drilling and pollution in Indian country in the US and Canada be addressed?

Will the casino rich tribes in southern Arizona, with the crowds pouring into their casinos, explain why so many of their own members are still living in poverty?

Years ago, one of the Hopi elders, Dan Evehema, sitting on a couch at his home on the Hopi mesa, warned: “Don’t take grant funding, they will control you.”

Urging Hopi to resist the formation of the US puppet tribal council, Evehema was among the Hopi Sinom that warned if coal mining was carried out on Black Mesa, and Navajos were relocated to make way for the mining, calamities would occur in the world, including natural disasters.

Meanwhile, watch the advertisements for sponsors and financial backers. These will tell you a great deal about who is really in control and why you are reading, hearing and seeing, what is in front of you.

3 Responses to American Indians and the CIA : Buying Silence With Advertising