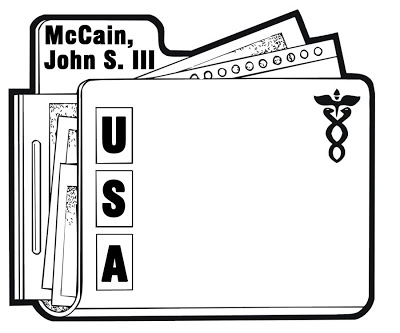 There are only a couple of weeks before we vote for a new president. Americans deserve to see the current medical records of both candidates before making up their minds. Senator McCain still refuses to provide his current medical records. Senator Obama fully complied just a few months ago, undergoing a complete medical checkup. His publicly available records describe Obama as “in excellent health, lean and muscular with no excess body fat.” Senator Biden released a current update, Monday, Oct. 20th, and appears in good health for a guy his age. Sarah Palin, has released no medical information on herself whatsoever.

In McCain’s U.S. Navy aircraft carrier flying days, passing a flight medical exam was easy for him. But as we get older it can become harder to pass that annual flight physical. I am only a few years younger than Sen. McCain and am a private pilot, so I know all about having a “current medical.” I am in decent health but am not “current.” McCain is tough. But it is also tough to imagine being shot out of the air by an enemy missile, surviving a bail-out with broken bones, then enduring five and a half years of torture as a POW some 41 years ago and today being in a third remission from melanoma cancer. All that could certainly make getting a clean bill of health tougher, but not impossible. I have several pilot buddies McCain’s age who are “current” and still having a dandy time flying. But none are running for president.

Remember why the pilot and co-pilot on commercial airliners eat different in-flight meals off the menu? If one meal is tainted, like bad tuna salad, both pilots don’t become incapacitated, leaving one to fly and land the plane safely. But we are not talking about toxic tuna salad here. And we are not talking about United Airlines. We’re talking about the United States, with John McCain as our possible president and his VP candidate, Sarah Palin, as our potential co-pilot. Showing us all he has a clean bill of health would clearly help the 72 year old McCain’s faltering campaign right now. It’s fair enough to ask why he doesn’t. Ms. Palin’s lungs do seem to be in tip top condition, but that’s all we have been permitted to know about her state of physical health.

While McCain invokes his discredited folk hero, “Joe the Plumber” and Palin whips up “the base” with her nasal, hate-tinged talking points, the noise they are making still can not drown out that basic question in voters’ minds, “Is candidate McCain healthy enough to take over an America which has just lost power in its engines and is flying in a fog of uncertainty? And what about his co-pilot?”