An Emmy For O’Reilly : Please Say It Isn’t So… 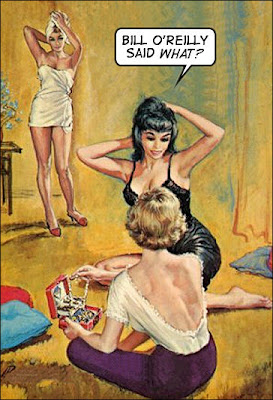 Bill O’Reilly is set to receive a local Emmy award in Boston next month. But he won’t, if a former fellow tabloid talker gets his way. According to the Boston Herald, Barry Nolan says O’Reilly is “a mental case,” and doesn’t deserve the award.

Having once worked in Boston, O’Reilly is being honored for taking his contributions to the national stage, first as anchor of Inside Edition and later on Fox News.

“I am appalled, just appalled,” Nolan, now with CN8, told the paper. “He inflates and constantly mangles the truth…and his frequent target is the ‘left-leaning’ media — the ones who do report the news fairly. And those are the same people who will be sitting in the room honoring him.” Oh, really?

Despite the protestations, local Emmy chief Tim Egan says O’Reilly will be honored. “You may not agree with him, but you can’t say he hasn’t increased the political conversation in this country with his style of broadcasting,” says Egan.

And it gets better. Nolan claims he will still attend the May 10 ceremony and, since his wife is out of town, he’s invited Keith Olbermann, as his date.

Source.
Thanks to Jim Baldauf / The Rag Blog

This entry was posted in RagBlog and tagged Media, Popular Culture, Right Wing. Bookmark the permalink.