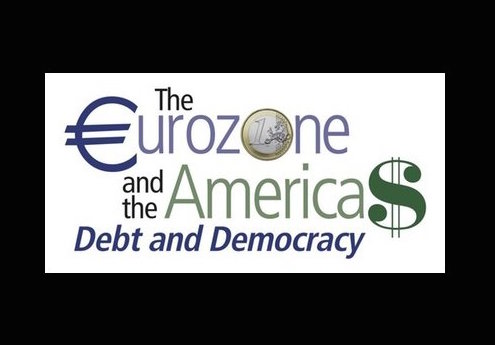 The LBJ School of Public Affairs at the University of Texas at Austin hosted a two-day conference, November 2-3, on “The Eurozone and the Americas: Debt and Democracy” that brought in an array of noted global policy experts.

The conference followed up on questions posed in 2013 at a similar conference, “Can the Eurozone be Saved?” Guests included current and former elected officials, labor leaders, experts in financial policy, and leaders of prominent anti-austerity forces from Greece, Spain, Portugal, and Ecuador. Learn more about the conference and the participants, here.

Dr. James K. Galbraith, Professor and Lloyd M. Bentsen Jr. Chair in Government and Business Relations, The University of Texas at Austin, was the primary organizer of the conference; he also gave opening remarks, and chaired a panel on “What is the Future of Europe?”

Professor Galbraith — who in 2015 served as advisor to then Greek Finance Minister, Yanis Varoufakis, his former colleague at UT-Austin — was a recent guest on Rag Radio, where he discussed debt, democracy, and movements responding to austerity measures.

Listen to Thorne Dreyer’s Oct. 30, 2015 Rag Radio interview with renowned economist James K. Galbraith, who addresses some of the issues discussed in this article, here:

Without exception, economists presenting at the recent University of Texas conference, “The Eurozone and the Americas: Debt and Democracy,” could see no justification for the austerity economic policies currently applied in Europe. Conference participants instead warned of dire economic, social, and political consequences from continuing such policies.

The conference sponsored by the Lyndon B. Johnson School of Public Affairs November 2-3, 2015, hosted an array of European, American, and Latin American experts who argued that austerity policies were driving some of the member states in the EU into the arms of far-right nationalist political parties, increasing unemployment rates, contributing to rising income inequality, and stagnating economic growth.

“Basic macroeconomics is solidly in agreement. There are no cases to be made for austerity in a depressed economy,” stated Olivier Giovannoni, assistant professor of economics at Bard College. “We have to ask who is putting in these austerity policies and why?”

Most conference participants fingered the EU itself, the ECB (European Central Bank), and the IMF (International Monetary Fund) for the imposition of austerity. National governments, even when elected officials profess to disagree, end up implementing these damaging policies.

Austerity policies generally mean a cut to social spending, cuts to public infrastructure, a weakening of social rights, and privatization of public assets, according to Andres Solimano, professor of economics at Catholic University of Chile.

For example, Solimano cited Greece where austerity had increased the wealth of the top 1% by 41% in only one year.

Austerity policies were imposed in order to comply with the EU fiscal stability rules which called for balanced budgets and only allowed for exceptions in extreme situations and for a limited amount of time.

The restrictive spending policies meant that unemployment would worsen.

The restrictive spending policies applied during a time of economic recession meant that unemployment would worsen. Antonio Lettieri, Center for International Social Studies and member of the central committee of the Italian Socialist Party, noted that Europe and the U.S. both had close to 10% unemployment resulting from the world financial crisis. But the unemployment rate in the U.S. was halved to almost 5% with a stimulus package while many European nations were subjected to austerity programs that just escalated their unemployment to 12% or more.

Lettieri explained that mainstream political parties, both center-left and center-right, have been imposing these policies on their nations. “The mainstream governments of Rienzi and Hollande are very compromised. It is the end of the center left and the center right. They endorse the European austerity and what is known as structural reform,” he said. (Matteo Renzi, Prime Minister of Italy, was elected on a center-left platform. Francois Hollande, president of France, is a center-left member of the Socialist Party.)

Even more worrisome is the political impact of austerity implemented by the mainstream that has driven workers into the arms of nationalistic far-right parties, suggests Gilles Raveaud, professor of Economics at the University of Paris Saint Denis.

‘The Socialist Party left the workers.’

Raveaud explained that the Socialist Party currently in power in France has asked workers to accept globalization and to accept the dictates of the EU. The EU is forcing austerity onto the French because of the so-called “Fiscal Compact,” which means that nation states in the EU must balance their budgets or face draconian fines or even sanctions from the EU. A balanced budget is achieved by cutting spending and/or increasing taxes (mostly resisted by business, so slapped on workers and the middle class). The contractionary policies are enacted whether the country is in deep recession or not.

The result, at least in France, according to Raveaud, means worker political support for the EU and the mainstream parties has been eroded. Politicians who are openly anti-EU and advocate protecting jobs nationally such as the far-right Madame Marine Le Pen are surging in popularity. Her political party, the Front National, has morphed from being anti-state and pro-free market under the previous leader, her father, Jean-Marie Le Pen, to favoring state intervention and opposing membership in the EU if that can protect French jobs.

The Front National and the Communists and other far-left political parties in France now share similar economic platforms. This makes for some strange bedfellows. Strange or not, some economists have even gone so far as to propose a grand coalition of the far-right and the far-left to better achieve the shared goal of protecting the French state social model and French jobs, observed Raveaud.

The far-right political parties include racist
and exclusionary policies.

Unfortunately, the far-right political parties include racist and exclusionary policies in addition to the pro-worker policies. It remains to be seen how such a grand coalition between far-right and far-left could possibly function, said Raveaud.

Philippe Legrain, former economic advisor to the President of the Economic Commission of the EU and visiting fellow at the London School of Economics, also sounded the alarm about the deteriorating economic conditions aiding the far-right and destabilizing the mainstream.

“The undemocratic union has imposed huge suffering on people,” said Legrain. “We could get a President LePen in France.”

Future of the EU

While one speaker, Ska Keller, vice president of the Green Group in the European Parliament, was very upbeat about the future of the EU, most of the speakers saw a need for change if the EU were to serve all the countries in the EU and not just the richer ones. And some of the speakers from Latin America said countries negatively impacted by the EU’s austerity policies should just get out.

Legrain said the Eurozone is a flawed
and undemocratic union.

Legrain said the Eurozone is a flawed and undemocratic union with the goal of simply minimizing losses for creditor countries. He said there would have to be a treaty change to get the EU going in the right direction. And getting 28 governments to agree is next to impossible. For now, Legrain claimed, the EU continues because of “fear” of what would happen if they withdrew.

Andrew Watt, director of the Macroeconomic Policy Institute of the Hans-Bockler Foundation, agrees there needs to be an EU treaty change to solve the protracted economic problems in the EU. Currently, the policy is simply to reinforce fiscal “rigor” and to insure there are no bailouts. Watt argues for a change in the treaty to get public investment out of the “balance the budget” rule, develop an unemployment scheme to get funding for unemployment on the EU level to balance out cyclical problems among the nations, and finally to change the mandate of the ECB to force it to be more employment oriented.

Carmelo Cedrone, member of the European Economic and Social Committee, said the EU is unable to help individual nations that are suffering. But yet there are internal market imbalances that benefit the strongest economies and nothing is being done to rectify that either.

(It is common knowledge that Germany has amassed a huge internal trade surplus while other impoverished nations have accumulated debt. The surplus countries are not made to spend that surplus in the EU or even domestically, which could stimulate economic output in the poorer nations laboring under a lack of demand.)

On the other side, the richer countries feel they should not have to pay for other countries’ problems.

Cedrone suggests that EU bonds should be strengthened and expanded as opposed to individual nation state debt; that public investment should be outside the stability or balance the budget pact; and that there needs to be a political union that is more democratic where decisions are taken for everyone and not just by the strongest economy.

Speaking from the experience of several Latin American nations now economically progressive, including Bolivia, Uruguay, Chile, and Ecuador, Mark Weisbrut argued that countries most exposed to the negativity of the EU policies should just exit the Eurozone.

“There is life after financial crisis,” he said. Weisbrut agreed that there would be some turmoil if countries exited the Eurozone and therefore the EU. But they would emerge from the chaos sooner than expected and be poised for better times.

Pedro Paez-Perez, Superintendent for Market Power Oversight in Ecuador, agreed that changing economic strategy is worth any short term costs. Neoliberal (free market) policies increased poverty and weakened institutions in his country for over 30 years. Society had been “degraded,” he said.

Paez-Perez said the country had to “change the regime of accumulation to sustainable green and socially acceptable; we had to renegotiate the role of our economies with the rest of the world.” The reorientation of the Ecuadorian economy led to increases in real income and reductions in poverty in Ecuador, he said.

But Rui Tavares, member of the European Parliament and an independent within the Greens-European Free Alliance group, disagrees that exiting the Eurozone or the EU is the solution to the economic problems facing some countries. The EU represents many advantages to member countries such as lack of border controls among countries and the ability to live and work in any of the countries.

“If you leave the Eurozone you would have to leave the EU. Euroexit is out now for the Southern countries,” Tavares claimed. Because exiting the euro means exiting the EU, these economies especially Portugal would be much worse off, he alleges.

Instead of starting over outside the EU to escape the imposed austerity policies, Tavares said there is only one option, and that is “eurozone reform.” The Greek, Portuguese, Spanish, and Italian economies must join together and express their vision of what the EU should be.

“We need to form a Paneuropean Progessive Movement to reform the EU,” he said.