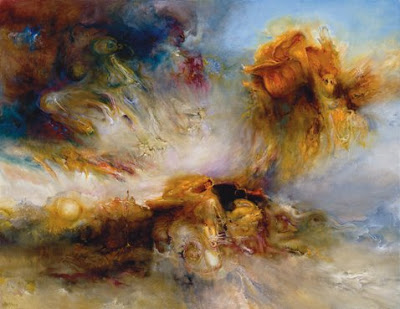 Eden adjusted by climate change 2005 by James Gleeson.
Carbon is building up in the atmosphere at a much faster pace then previously thought
By Juliet Eilperin / September 26, 2008

The rise in global carbon dioxide emissions last year outpaced international researchers’ most dire projections, according to figures being released today, as human-generated greenhouse gases continued to build up in the atmosphere despite international agreements and national policies aimed at curbing climate change.

TyIn 2007, carbon released from burning fossil fuels and producing cement increased 2.9 percent over that released in 2006, to a total of 8.47 gigatons, or billions of metric tons, according to the Australia-based Global Carbon Project, an international consortium of scientists that tracks emissions. This output is at the very high end of scenarios outlined by the Intergovernmental Panel on Climate Change (IPCC) and could translate into a global temperature rise of more than 11 degrees Fahrenheit by the end of the century, according to the panel’s estimates.

“In a sense, it’s a reality check,” said Corinne Le Quéré, a professor at the School of Environmental Sciences at the University of East Anglia and a researcher with the British Antarctic Survey. “This is an extremely large number. The emissions are increasing at a rate that’s faster than what the IPCC has used.”

The new statistics also underscore the growing contribution to the world’s “carbon budget” from rapidly industrializing countries such as China, India and Brazil. Developing nations have roughly doubled their carbon output in less than two decades and now account for slightly more than half of total emissions, according to the new figures, up from about a third in 1990. By contrast, total carbon emissions from industrialized nations are only slightly higher than in 1990.

“What’s happening is the major developed countries’ plans are converging for emissions growth that will stop and be able to come down significantly,” said James L. Connaughton, who chairs the White House Council on Environmental Quality. “But that’s being completely overtaken now by the increasing greenhouse gas emissions in developing counties. It underscores the need for a broader and more aggressive effort by the major economies to come together.”

It is unclear how much industrialized countries will be able to reduce their carbon output in the years to come, regardless of whether developing nations seek to restrain their greenhouse gas emissions. The federal government predicts that U.S. fossil fuel consumption will increase, not decrease. Japan, Canada and several other countries that committed to reducing their carbon emissions under the 1997 Kyoto Protocol have fallen far behind in meeting their targets.

Moreover, new scientific research suggests Earth is already destined for a greater worldwide temperature rise than previously predicted. Last month, two scientists from the Scripps Institution of Oceanography and the University of California at San Diego published research showing that even if humans stopped generating greenhouse gases immediately, the world’s average temperature would “most likely” increase by 4.3 degrees Fahrenheit by the end of this century. Writing in the journal Proceedings of the National Academy of Sciences, they based their calculations on the fact that new air-quality measures worldwide are reducing the amount of fine particles, or aerosols, in the atmosphere and diminishing their cooling effect.

The IPCC has warned that an increase of between 3.2 and 9.7 degrees Fahrenheit could trigger massive environmental changes, including major melting of the Greenland ice sheet, the Himalayan-Tibetan glaciers and summer sea ice in the Arctic. The prediction that current emissions put the planet on track for a temperature rise of more than 11 degrees Fahrenheit, Le Quéré said, means the world could face a dangerous rise in sea level as well as other drastic changes.

Richard Moss, vice president and managing director for climate change at the World Wildlife Fund, said the new carbon figures and research show that “we’re already locked into more warming than we thought.”

“We should be worried, really worried,” Moss said. “This is happening in the context of trying to reduce emissions.”

The new data also show that forests and oceans, which naturally take up much of the carbon dioxide humans emit, are having less impact. These “natural sinks” have absorbed 54 percent of carbon dioxide emissions since 2000, a drop of 3 percent compared with the period between 1959 and 2000.

Connaughton argued that the Bush administration’s “major economies” meetings, a series of talks among both developed and rapidly industrializing nations, have moved the world closer toward achieving significant cuts in greenhouse gases because the group is developing a common measurement system for emissions and is exploring how different industrial sectors can commit to worldwide reductions.

“We are unquestionably moving toward each other,” he said of the industrialized and developing countries, “but there’s a ways to go.”

But Moss, who characterized the latest round of negotiations as “a lot of talk but not much action,” said the administration cannot expect emerging economies to constrain their carbon emissions when the United States has yet to adopt binding targets for cutting its greenhouse gases. He noted that since 1990, the United States has released about 30 gigatons of carbon into the atmosphere, compared with China’s seven gigatons and India’s one.

“We really do have to start showing some leadership and start doing some changes ourselves,” he said. “If we did that, China and India, which are developing rapidly, would be willing to come along.”

1 Response to Apocalypse Soon? : The World Keeps Getting Hotter