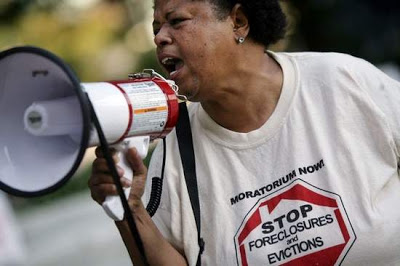 Sandra Hines, of Detroit, who said she lost her home after 40 years, speaks at the Spirit of Detroit statue to protest the government bailout of financial institutions on Thursday, Sept. 25, 2008 in Detroit. Photo by Rashaun Rucker / Detroit Free Press.
The real reason conservatives led the fight against the bailout deal
By Joshua Holland / September 30, 2008

On Monday, the Bush administration’s massive Wall Street bailout went down to a narrow defeat in the House. After the 228-205 vote, markets crashed, and the usual partisan finger-pointing followed. According to the Washington Post, Speaker Nancy Pelosi “maintained that Democrats ‘delivered on our side of the bargain’ by getting 60 percent of House Democrats to support a bill that was built around the Bush administration’s proposal, whereas 67 percent of House Republicans voted against it.”

At first glance, it may appear that the 133 House Republicans who broke with their party’s leadership did so out of principle — that they bravely stood up against a massive cash transfer to those most responsible for precipitating the financial crisis in the first place. They appeared to be gambling a lot in taking that principled position, despite the fact that the bailout had drawn fire from across the political spectrum. The conventional wisdom, after all, has gelled around the idea that only an unprecedented cash infusion into the ailing banking system will stave off a potential Next Great Depression. The message many rebellious conservatives sent was that it takes courage to roll the dice with the world’s economy six weeks before an election, even if the public was deeply skeptical of the measure (the reality is that almost none of the lawmakers who face tight races this fall voted for the bailout, fearing a backlash from voters; Congress is not known for courage or principle on the eve of an election).

And there’s no question that the bill they and 95 of their Democratic colleagues killed was an extremely bad one, even if some token nods to “Main Street” had been added to help it go down lawmakers’ throats more smoothly. Democrats abandoned a key provision — one vehemently opposed by lenders — to allow bankruptcy judges to modify mortgages that are in the process of foreclosure, and they accepted only token limits on executive compensation for companies that would be rescued under the plan (PDF). Worst of all was a vaguely worded provision that might have allowed the Treasury to buy up bad paper at the price at which it was originally booked, rather than at those securities’ largely unknowable but deeply diminished current value. That would have essentially given a small investor class an opportunity to recover its losses at the expense of the American taxpayer (and future taxpayers, as the bailout would be financed through debt).

But a deeper look reveals another picture of the legislative fight that has occupied Washington since George W. Bush first proposed the bailout. Unlike most House Democrats, who voted against the bill in an attempt to send the plan back to the drawing board to get a deal that might better protect taxpayers and homeowners, House conservatives torpedoed the measure in order to advance their own alternative “bailout,” one that’s an ideologically motivated back door to bailing out Wall Street without doing anything for Main Street.

The plan is notably light on detail, even for campaign season, when politicians are loath to discuss the fine points of any proposal. But based on what can be gleaned from media reports, the heart of the “alternative” scheme is for the government to sell insurance for securities based on bad loans, rather than buy up the paper directly. Supposedly, the premiums would be high enough to assure that Joe and Jane taxpayer don’t get fleeced.

On its face, that idea seems both fiscally sound and decidedly conservative, in the traditional sense of the word.

But remember what the immediate problem we face is all about. The financial industry is weighed down by an enormous shit pile of bad paper — mortgage-backed securities, complex derivatives and insurance-like instruments that were supposed to make all these “creative” investment vehicles somewhat sound. That shit pile, impossible to value accurately, is threatening the whole economy, as lenders hunker down and hold onto their cash reserves in an attempt to ride out the storm of foreclosures, and that’s making it tough for businesses and consumers to get credit they need to expand their operations or buy new gizmos.

That’s not a situation that lends itself to a government-backed insurance policy. If the premiums aren’t deeply subsidized by the American public, they’ll be out of reach of troubled banks by definition — after all, if they had enough cash to cover their bad debts, which will ultimately be the job of the insurer (that’s you, me and the people we know), then they wouldn’t find themselves on the brink of collapse to begin with. That means the government would still end up effectively buying up the banks’ worthless paper piece by piece as the underlying assets on which that paper is written go belly-up. Think of it as the government selling fire insurance for houses that are already ablaze.

So the point was not to spare the taxpayer the expense of Wall Street’s shit pile. By offering an alternative plan, House conservatives abandoned a negotiating process that was, at heart, about trying to modify the disastrous Bush-Paulson plan so that it didn’t just bail out the financial sector’s movers and shakers without getting some concessions for working America.

The other two tenets of the alternative plan are worse still.

In keeping with the tradition of a party that has one policy solution to all economic ills — cutting taxes on the wealthy — the conservatives who bucked their leaders also suggested cutting capital gains taxes, even if only on a temporary basis. It’s a triumph of ideology over common sense. We’ve seen stock markets tanking, as investors flee like rats from a sinking ship, seeking safer ground in commodities, which have gone through the roof (oil prices have been moderated somewhat by expectations of a long slowdown that would cut demand). A tax holiday on capital gains would only encourage those investors with steely nerves (and gains) who are staying in the market to join the herd, getting out while it’s tax-free to do so. That can only send the already sky-high prices for food, energy and everything else even higher into the stratosphere. Ordinary working people would end up paying on both sides of the deal — getting soaked for Wall Street’s Reckless Lending Insurance and then paying through the nose to put food on the table.

Adding insult to injury is the third leg of the “alternative” bailout plan: more deregulation of the financial sector.

That’s nothing short of breathtaking in its audacity. It was a lax regulatory environment that brought us to the verge of collapse in the first place. Exotic security-backed loans — loans that didn’t conform to the standards in place for banks that held deposits, including subprime loans, mortgages given to people who misstated their income and loans with heavy prepayment penalties and huge balloon payments — are, as one would expect, faring far worse than the kinds of traditional loans that are regulated by the Federal Housing Authority or backed by Fannie Mae. Regulations passed by Congress only three months ago, as the depth of the meltdown had become clear, made “coercing a real estate appraiser to misstate a home’s value” and “making a loan without regard to borrowers’ ability to repay the loan from income and assets other than the home’s value” a no-no; if similar commonsense regulations had been in place over the past decade, the run-up of the real estate market wouldn’t have been as frenzied, and we wouldn’t see the skyrocketing number of foreclosures we’re witnessing today.

Again, none of this is to suggest that Americans should shed a tear for the demise of the compromise deal struck between Treasury Secretary Paulson and the Bush administration — it was a bad deal that deserved to go down in flames. But it’s also becoming increasingly evident that some sort of intervention is necessary to prevent the crisis from spreading through the entire global economy. Rather than pugnaciously cling to a failed ideology by heaping lucre on the wealthiest in the hope that it trickles down to the rest of us, Congress should be going back to the drawing board and coming up with a bailout plan rooted in a modicum of economic justice.

The House conservatives who have proven to be such a fly in the ointment are trying to go the other way — cooking up a plan that will only deepen Main Street’s pain in the name of saving it from Wall Street’s predations.