Apples and Oranges – Torture in Amerikkka 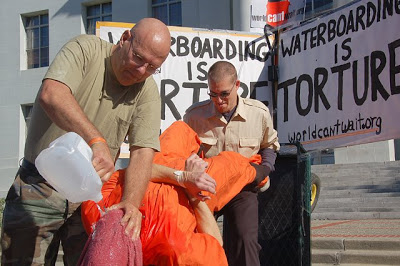 “The Underdeveloped Jurisprudence of the Forcing/Pouring Distinction”
By Marty Lederman / April 24, 2008

There have been several accounts in recent days of the Vice President and several agency heads and other high government officials (Ashcroft, Rice, Powell, Tenet, Gonzales, Rumsfeld, et al.), convening meeting after meeting in which they deliberately and dispassionately formed a consensus that the United States should establish a systematized, bureaucratic regime of officially sanctioned waterboarding and other plainly proscribed war crimes.

These stories have struck me as old news: After all, last year the President himself publicly boasted of having personally authorized the CIA black sites program and its “enhanced interrogation techniques,” which we know to have included waterboarding, hypothermia, stress positions, severe sleep and sensory deprivation, threats to detainees and their families, etc. — all conduct that is prohibited by several legal norms and that this nation has traditionally prosecuted as war crimes when engaged in by others. If the President authorized it, well then it should come as no shock that there would first have been principals meetings at which this all-important program was discussed and recommended.

What is alarming — grotesque, even — is not that such meetings occurred, but that, as far as we know, no one at such meetings interrupted the flow of discussion to point out the obvious — namely, that these were the highest officials of the most powerful nation on earth, calmly discussing torture and cruel treatment that has long been universally condemned and legally proscribed. The JAGs understood this immediately when the regime of official torture and cruelty seeped into the military. Jim Comey, when he got wind of it, warned DOJ colleagues that they would all be ashamed when the world eventually learned of it. For goodness’ sake, as Robert Mueller testified today, even the FBI — those cowardly, shrinking violets — quickly recognized this for what it was. And it’s not as if the CIA itself was sanguine about the legality of what it was being urged to do: According to a declaration of the information review officer for the CIA’s clandestine service court in a current FOIA case, “[t]he CIA’s purpose in requesting advice from OLC was the very likely prospect of criminal, civil, or administrative litigation against the CIA and CIA personnel who participate in the Program.”

So why wasn’t there any alarmed dissent — a “Snap Out of It!” moment from Colin Powell, perhaps — at the principals meetings? How could that not have occurered?

Of course, part of the explanation no doubt was the sheer panic and terror these officials felt in the wake of September 11th, with the prospect of further devastating attacks appearing to be all-too-feasible, and possibly imminent. But it’s increasingly clear that another essential factor was that these government officials convinced themselves that this was program was all hunky-dory, and a world apart from the torture regimes with which they were familiar, because this time, the administrative regime was being sanctioned and overseen by trained professionals — the best lawyers in the government, as well as physicians and psychologists.

So, for example, the principals were plainly moved by the insistence of OLC and the Department of Justice that there were countless sophisticated, heavily footnoted reasons why the numerous apparently pertinent legal limitations that would prevent the CIA program — the Constitution, the Geneva Conventions, the Torture Statute, the Convention Against Torture, the UCMJ, the assault and maiming statutes, etc. — did not, in fact, apply to this war, to this agency, to these detainees, to these secret locations, . . . to this Commander in Chief.

For instance, the Attorney General himself sat in on these meetings, and it appears that the nation’s chief law enforcement officer assured the assembled participants (including himself) that when the Senate gave its advice and consent to the Convention Against Torture, it included a reservation “defin[ing] torture as something that leaves lasting scars or physical damage,” such that “no, waterboarding does not violate international law.” Yes, John Ashcroft insisted on this legal justification just the other day, as an explanation of how he could have approved waterboarding. Needless to say (well, it used to be needless, anyway), it ain’t so — there’s no such Senate reservation about lasting scars or physical damage. But John Ashcroft continues to this day to believe that there was!

Read the rest, with a startling exchange between John Ashcroft and a questioner at Knox College, here. / Balkanization / Guantanamo Blog